What can one say about 12 hours on a bus?

We left our hostel at 7am to make our way to the bus station to catch the Dar Express,  after our minibus driver took us to the wrong bus station we eventually made it to the right one with seconds to spare.  There are only 2 busses a day so missing the 8.15 would have caused major problems.

Dar is huge and sprawling. It took ages to get out of the city, but the coach was comfortable and the Christian African pop music that was blaring out at full volume couldn't last for ever could it?

Well, no it couldn't.  It was followed by three B (possibly C,D or E) movies.  The first was hugely violent and involved more swearing than I have heard in a film for a very long time, the second was some sort of time travel thing that at one point involved a man putting a purple metallic vibrator in his ear while shouting 'I'm coming' to someone in the next room, and the third was called 'Prey' and involved a family on safari being mauled by lions.  Not suitable viewing for our older teens, but definitely an odd choice on a bus that also had lots of very young children on it.

As if this wasn't enough, we were then treated to very loud African rap music videos.  Frankly they all sounded the same - or my eardrums have been permanently damaged.

The scenery was stunning - but we spent much of our time sleeping, recovering from our 'white lunch' - cheese spread triangles and a bread roll!  The food team had decided that, because I turned down a donut the previous day, I obviously wouldn't want one today, but thought that my allergy to apples would have vanished overnight!

We arrived at Weruweru Lodge much later than anticipated and pitched our tents in the dark.  A quick dinner complete with vegetables (I've been fantasising about a plate of vegetables for a couple of days now) was very welcome.

So it seems you can say quite a bit about 12 hours on a bus! 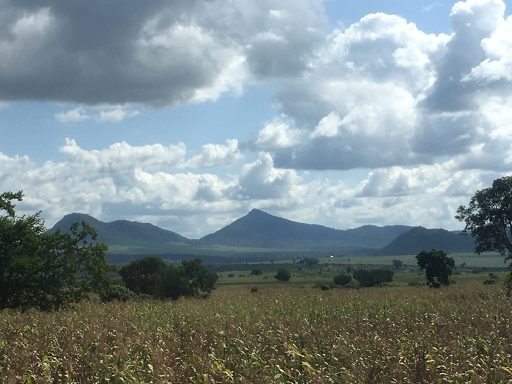