I signed up for this race way back in the summer.  It sold out within a couple of hours in an internet frenzy in the running world that was reminiscent of the hype that surrounds ticket sales for a Stone Roses concert.  There was a 10k option but. when I signed up, a half marathon wasn't really what I considered to be a long run - so the half it was.  I didn't do anything as sensible as checking the start time, but for some reason had it in my head that we would be running late at night.  I blame British Summer Time!  It is hard to imagine that it can be dark by 5pm while sitting in the garden in full daylight at 9.30pm! 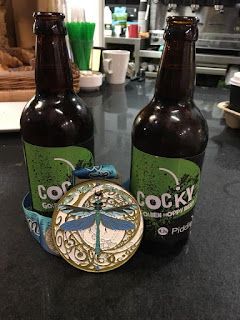 The race was organised by Andy and his excellent team at White Star Running.  There's nothing not to like about a WSR event, this view is shared by so many people that turning up feels a bit like turning up at a party where everyone knows your name.  The party atmosphere was much in evidence as we gathered at the start - fabulous fancy dress, tonnes of tutus, plenty of poppies and lots of fairy lights!  The start was at the visitor centre in Moors Valley Country Park and after a quick race briefing and a chef that we all had our head torches on we were off.

It was very crowded at the start, but that was fine.  I got to listen to lots of conversations around me, which is often very amusing.  It also meant that I didn't set off too fast and took care with where I was putting my feet on the forest path.  One conversation, probably about 3 miles in, went as follows (-ish - my memory isn't great)

Runner 1:  I'll run with you - I don't want to run too fast
Runner 2: I'm actually enjoying running by myself, I wouldn't want to slow you down
Runner 1: Oh, that's fine, I need a slow run
Runner 2: Er, I just find that when we run together you tend to run just a wee bit faster than I want to run, so I push myself to keep up
Runner 1: But it is good to push yourself a bit, anyway, I'm out for a slow one

How long this went on for I don't know, as I was running a wee bit faster than they were so was out of earshot, but Runner 2 was trying, so politely, to tell the other runner that they weren't interested in running together and Runner 1 wasn't having any of it!

Just as I left The Lovestation (a most wonderful aid station with cake, beer and hugs) I heard my name being called - I turned round and saw a sea of head torches and had to ask who was there!  A group of 3 friends from Trotters Independent Trail Runners.  'We knew it was you,' said one of them, 'because of your running style and the funky leggings!'  (Tikkibo - you can see them here!) They are all really good runners, I ran with them for a bit, but felt that I was holding them back, so slowed down and let them go on, only to catch them up about half a mile later.  We ran as a loose group until I needed a wee stop (the queues at that start had been too long!)  I turned off my head torch and headed off the path.  I forgot that I had glow stick bracelets - and as I pulled up my leggings I looked up to see a group of runners waving at me!
I ran with them for a bit, while we discussed places we had peed, before running on.  I caught up the Trotters guys again, we fell into conversation (predictably about bodily functions but also about Remembrance Day, the iPhone X and missed career opportunities), ran through and round puddles.  Some of the puddles were huge, and quite deep, there was plenty of mud and I heard of people who took tumbles.  At one point I was avoiding a puddle, while my running companion adopted a 'straight through the middle' approach.  I think I was wetter than he was as he splashed the entire contents of the puddle over me!  By this time, we'd split into two pairs rather than running as a four.  I could hear the other two chatting away behind us and was sure that we'd be back together again soon - especially as I was not even going to attempt running up the very steep, very off road (i.e. not even a proper path) hill!

We were so lucky with the weather.  The awful rain that had greeted us on Saturday morning had stopped during the afternoon, the ground was pleasingly soft and squishy underfoot. and when it did start to drizzle it felt refreshing and looked pretty in the beams of our head torches.

Coming to the end of the second lap we were delighted to peel off the course and onto the finish approach.  Due to a dip in the ground we could hear, but couldn't see, the finish until we were right on top of it.  Looking at watches for distance didn't help - the vagaries of GPS meant that we had 2 quite different distances recorded.  We crossed the line, were given our gorgeous medals and collected a packet of yummy biscuits (which I have hidden from the children) and a buff.  We reunited with friends, put on some extra layers - it gets cold really quickly at night - and then went off to eat chilli!  The cafe at the visitor centre had stayed open specially for us and we had pre-ordered our food.  We were delighted to find we could also buy a beer (Cocky Piddle is very nice).  The chilli was good, the company was great and it was lovely to get warm again.

As we made our way back to the car there were still runners crossing the finish line - in an ideal world I'd have liked to stay around and cheer them all over the line, but it was getting colder now, and getting cold in damp clothing is not a good idea.

All in all a great event.  Not a fast one, trail running in the dark was never going to be fast, but very enjoyable with great company, awesome bling, tasty food and beer!