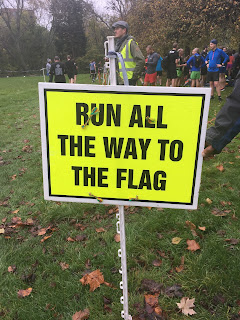 Having said in my last post that I don't get to indulge in much parkrun tourism, here comes another blog post about me going to a different parkrun!

This weekend Husbando had to be in London overnight for a book fair in Chelsea.  No. 1 son was popping down from university in Manchester to help him, so I hopped on the train after school on Friday and spent a very pleasant evening with the two of them.

On Saturday morning I had a huge number of parkruns I could choose from.  I used the excellent Tourist Tool to narrow down the choices to Burgess parkrun and Southwark parkrun - both were within 3 miles of where we were staying, but the route to Burgess Park looked simpler, and with my capacity to get lost while running that can only be a good thing.  Just as well - Southwark parkrun was cancelled today due to setting up for a fireworks display later in the day.

I've never run to a parkrun before.  I've had a mad panic sprint from a tube station to the start line, but  I have never set out to run to a parkrun and back again before.  Three miles there, pretty much in a straight line - simples!  Shame about the rain.  It wasn't really part of my plan to arrive at the start line soaking wet - but never mind - skin is waterproof. 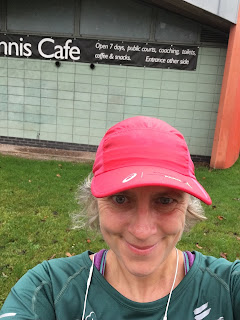 The start was easy to find.  Wearing my 250 shirt guarantees that someone will say hello to you at a parkrun (in my experience anyway).  Most of the time they want to know where the start is/where they can leave the bags/where the loos are - none of which I can help them with as I've not been there either!

Just before 9am the 'new runners' briefing was announced and I dutifully went along.  I was pleased to hear that this was a one lap course - I like a one lapper!  The new runner briefing was held at the back of the starting pack.  A word of advice to  any tourists wanting to run a fast time would be 'skip the briefing!'  Unless you are planning to be the very fastest person there you know the drill and can follow the person in front.  In fact even if you are planning to be the first finisher the marshals will point you in the right direction!  I did go the briefing, and so had to start at the back of 350+ runners!  I wasn't too worried - I'd already run 3 miles and was just wanting to have a pleasant run in the park. 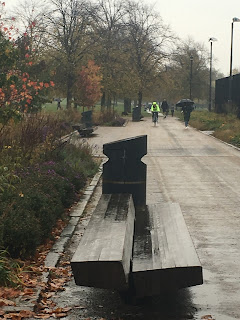 Unbeknownst to me, the runners were assemble on paths either side of a flower bed and there was a fine array of park furniture and bins to negotiate - I felt as though I was in a game of Super Mario Bros as I tried to go over or round the benches!  Once clear of this - it was plain sailing.  Relatively flat, on paths around a really interesting park.  There was a lovely fishing lake, complete with fishermen, a bridge to nowhere and intriguing glimpses of various buildings.  If the weather had been nicer I'd have hung around to explore a bit! I was surprised at how easy it felt to run today.  I ran the first mile faster than I expected to, and sped up a bit faster each mile.   I chatted with fellow runners as we ran, enjoyed the feeling over overtaking a fair few people as I ran to the finish funnel.  The funnel manager managed to congratulate every runner as they came through to collect their finish token!

After getting my token scanned, and chatting with some tourists from Fulham Palace parkrun, I started off back to the hotel.  It was raining properly now, there were a lot more pedestrians and puddles to negotiate and I managed to take a wrong turn somewhere along the way but got back eventually for a very welcome hot shower!  Soon after I got back to the hotel, while I was sitting with a cup of tea and a couple of slices of buttered toast, my results text came through.  I'd finished first in my age category - for the first time in a very long time!

I think I may have caught the tourism bug.  I may have lived in London for years, but Burgess Park is 'south of the river' and in an area that I have never been to before.  I wonder where my next 'new' parkrun will be....