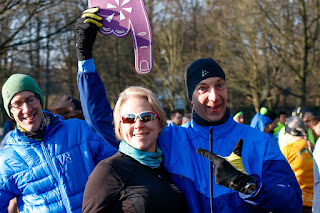 The doctor, bless him, has said that to aid my recovery, I should have a gentle walk outside every day.  Yay!  So starts the long, slow road back to fitness.  I was reminded earlier in the week that today would be my 300th parkrun.  This is most definitely not an official parkrun milestone, but it seems that any opportunity for cake is worth noting, so I baked a cake and decided to head to my home parkrun.

I don't get to run there as often as I used to because there is now a closer to my house parkrun which makes life easier for the rest of the family.  But Basingstoke is where I started my parkrun journey and as such will always hold a special place in my heart.

It was bitterly cold this morning so I decided to leave the small people at home.  Selfishly I wanted to be able to go for a run without having to listen to people complain about how cold they were, could they stop after one lap? How about after two laps? And then demand attention and food while I was trying to catch up on the gossip at coffee.  I don't think they were too upset, but they missed a beautifully clear morning with stunning blue skies! 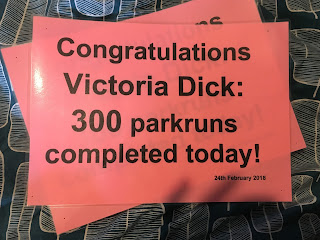 I was trying to keep a relatively low profile (not sure that the doctor would be too happy if he heard I was running rather than walking) but that was scuppered by being outed at the run briefing and the ever exuberant MrW pointing me out using a giant purple foam finger!  I chatted with friends on the way to the start, looking forward to getting going so that my toes might start to defrost.  Unfortunately one poor lady tripped soon after the start and hurt her ankle, it could have been a much worse situation but several parkrunners stopped to see if she was OK and to warn approaching runners to slow down and move around her.  I hope she is now recovering well. 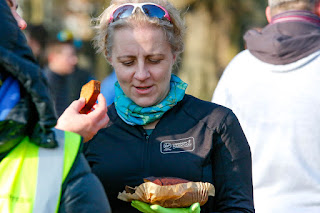 We ran the winter course - three anticlockwise laps, all on the paths.  My Garmin announced my performance condition was -5!  Not a good omen, but to be honest it didn't feel too much like hard work - I suppose I am used to using only part of my normal lung capacity.  As I ran down Tennis Court Hill  I saw the sign above.  I cannot tell you how wonderful that made me feel!  I had a huge smile on my face as I ran past it - the same thing happened as I ran past a similar sign in the woods.  Thanks must go to SirM of the park for such a thoughtful gesture.  It was also lovely to see so many of my B'stoke parkrun friends.  Somewhere on the last lap I caught up with MrW, who is fast approaching his 500th parkrun.  It has been a while since I have overtaken him as I've usually been running with the small people so I very ungallantly went for it.  I then had to keep my pace up as I suspected that he would want to try to regain the lead.   I couldn't afford to look back and see what he was up to, so I just kept going and hoped for the best!  I crossed the line in 26mins 30 seconds, my best time of 2018 - although that isn't hard given the state of my lungs.

Thank you to all the volunteers who made today's run possible - standing around in the cold must have been miserable today!  Here's to the next 200 parkruns!