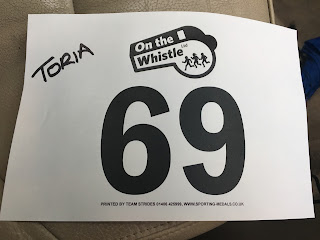 When I looked at the race calendar and the family calendar earlier this year it appeared that I would not be able to take part in this fabulous little event.  I thought I'd be spending child no. 4's birthday ferrying him up to Staines to complete his scuba open water diving training.  I was gutted as I'd run the previous two Wickham Whistlers and love supporting On The Whistle.  On Wednesday last week a lift share was organised for the boy - but the race had sold out. I asked the very accommodating organisers if they could keep me in mind if anyone dropped out.... and my luck was in.  They even made sure I got my favourite number!

The Whistler is a 6hr challenge event - run as many laps as you like within the cut off to get your medal.  I only needed to run a half marathon and, realistically, only had time to run a half marathon.  This meant I would need to complete four laps.  I arrived early, paid my money, picked up my number and then retreated to my car because I wasn't feeling terribly sociable!  My stomach was feeling very dodgy - I've spotted a bit of a pattern here, I don't eat much meat during the week, and the food I eat tends to be fairly simple.  Lunch is often a bowl of ramen, supper is a bit of cheese and some crackers.  Then at the weekend on a Saturday evening we invite friends over and BBQ enough meat to feed a small army and the next day I feel ghastly!  I eventually emerged from the car and chatted with friends. 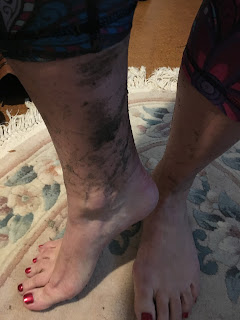 After our race briefing we were off.  It was a lot muddier than I anticipated.  The conditions underfoot have got wetter every year - next year I predict we will have a swimming section!  The route is out an and back along a disused railway track, the bluebells were visible in the woods to either side, we ran under bridges and past rivers - it was all very pleasant if a little chilly.  Each lap is 3.3 miles.   I ran the first lap, listening in to conversations of those around me.  My tummy was grumbling and my head wasn't really where I needed to be.  It was going to be a long four laps.  The second lap nearly broke me.  The running wasn't hard, but I got it into my head that I had run this route so many times and I really didn't want to run it again.  I considered finishing at the end of the lap and completing another 6.5 miles on my own.   I got to the aid station, filled my water bottle(*) and considered my options.  While I was pondering a familiar face came up to the aid station.  We share a mutual friend and see each other at lots of events, but have never really done much more than say hello to each other.  I asked if I could run with her for a lap.  She protested that she was slower than me, and I said I'd rather run slower than nor run at all, so we grabbed some snacks (sausages and fudge are an odd combination but do hit the spot)  and set off for lap number three. 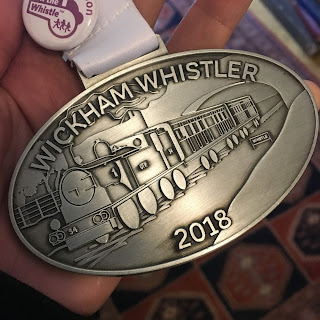 Talking certainly made the time pass faster.  We chatted about all sorts of things - discovering that we are both members of FetchEveryone and both post on the same forum. To be fair, she had worked out who I was ages ago - but I'm not very quick on the uptake!  At the end of lap three I saw a familiar face at the aid station - he'd run to Wickham to run a lap with me.  We'd met at various On The Whistle events but haven't seen each other for ages.  He graciously slowed his speedy pace to plod along with me.  We walked a bit when I really thought my guts were going to revolt - if I could have made myself throw up I would have done, but I managed to hold everything together and muster a bit of speed towards the end.

I rang the bell to signal I was done, and collected my medal - and a raffle prize from the Chilly Hilly back in January.  I may or may not have told someone that it was a prize for the being the coolest person at the race.....   I am glad I stuck it out - this week's training miles are in the bag and I can take it easy until Tuesday now!

Thank you to everyone at On The Whistle for a great morning - the hugs, encouragement and laughter are much appreciated!

(*) Hats off to On The Whistle - they are encouraging everyone to bring their own water bottle to reduce the number of plastic cups being used.