Oh what a carry on!

Up early this morning, after a thoroughly enjoyable evening meeting up with school friends yesterday - hard to believe it is 30 years since we took our A'levels and set out to conquer the World!  Getting up early on a Sunday is never fun, but until a race director decides to start organising races on my doorstep it is just a fact of life!  We were on our way to Walton on Thames for another of Rik/Phoenix Running's events.  The concept is simple, six hours to run as many or as few laps as you feel like running to get an awesome bit of bling.  Today's race was 'Carry On Up The Tow Path' and a fair number of runners had decided that, blazing hot temperatures not withstanding, fancy dress would be a great idea.  Hats off to them!  An extra layer of polyester, not to mention one gentleman dressed as Spartacus complete with plastic armour and a helmet, wouldn't have been my first choice today!

While we waited to start I chatted with other runners, you see a lot of 'repeat offenders' at these events which means that there is always a friendly face and someone to talk to.  I had a clear aim in mind, given the state of my toe (still broken) and the fact I've done very little training and because Husbando and our friend were running a half marathon, a half marathon was as far as I was planning to go.  I had decided, given the temperature to run/walk (9mins/1min) from the start.

The tow path is lovely and flat, with a mixture of shade and blazing sunshine with the occasional and very welcome light breeze.  I forgot to take my first walk break!  The rules are quite strict - if you forget a break you have to carry on until the next one is scheduled.  This is primarily because it keeps the maths nice and simple.  Lots of people think that running laps is boring but in reality the idea of running laps is far worse than actually doing it.  You get to talk to lots of people, you know exactly when you are going to get your next bit of shade and exactly how long it is to the aid station.  I tend to spend my first lap looking at the ground underfoot (to make sure I don't fall over) and after that it is a case of just keeping going - I try to find something different to pay attention to on each lap (counting boats for example) but invariably I get distracted and forget.

Today it was really hot out there.  The towpath was quite busy, with lots of cyclists going up and down as well as rowers on the water and people picking blackberries.  There were dogs and small children to avoid tripping over - plenty to watch to take one's mind off running!  The aid station was kept busy supplying us all with water and snacks and we were given our wrist bands (1 for each completed lap) but an Egyptian goddess!   Husbando was running and chatting with a maths teacher, my friend was running well (on track to get a massive half marathon PB), the sun was shining and everything was going well.  If we hadn't all agreed on a half I'd have been tempted to keep going.   Husbando was the first half finisher, I was the first woman half marathon finisher and our friend smashed her previous time by 13 minutes!  Once all three of us had finished and collected our bling, grabbed yet more water and handful of sweeties (for some of us) we made our way back to the car - which always seems to have been moved further away during the race - and a quick stop for something to eat on the way home.

Thank you, as ever, to Rik and his amazing team of marshals for putting on another great event.  I know we'll be back for more soon.... hopefully I'll be back to running marathons again soon! 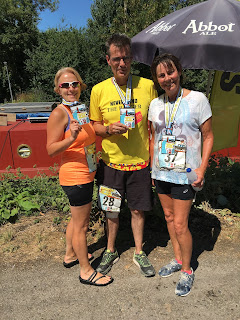