The parkrun without a park. 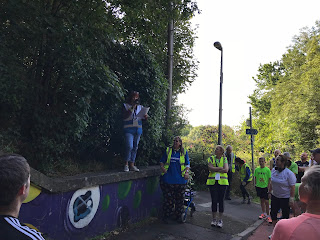 As a rule I don't travel just to do a parkrun, but as with most rules there are exceptions!    This morning was one of those exceptions.  Severn Bridge parkrun is a relative newcomer to the parkrun family, this morning was only its third running.  Husbando and I decided that, having been home for all of 4 days, we needed a break, so booked a hotel in Bristol and drove down early on Friday afternoon - which is when, stuck in traffic on the M4, we remembered that it was Bank Holiday weekend.  Never mind.  We were excited enough by the prospect of running across the Severn Bridge to make the traffic worthwhile.    The Severn-Wye Bridge is an elegant suspension bridge that crosses both the Severn and the Wye (the clue's in the name!).  It was opened by the Queen on 8th September 1966 (just 18 days before Husbando was born) having taken three and a half years to build and costing £8,000,000 (the bridge, not Husbando - he took the standard 9 months to construct, but has probably cost a lot more over his lifetime).  For 30 years the bridge carried the M4 motorway, but when the newer Price of Wales Bridge was opened in 1996 (to carry the M4) the motorway was renamed the M48.  You can see the newer bridge from the old one - which makes me think that a run taking in both bridges would be rather lovely!    The Severn Bridge was granted Grade 1 listed status in 1999 - there can't be many parkruns where you run on a Grade 1 listed structure!

The parkrun itself starts in Monmouthshire and the route is an out and back over the bridge.  Whilst running you cross the national border into England, and take in the counties of Gloucestershire and Avon, before turning around and heading back into Wales and finishing in a tunnel! 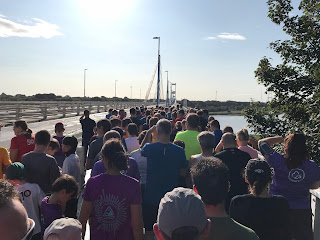 As we drove to the carpark (in a local football club car park) I thought I spotted a familiar face, and then as we pulled into the carpark we saw a load of Basingstoke parkrunners getting out of their cars! The parkrun world is very small!  The run briefing was excellent - lots of pertinent information, but sadly I had to use my 'teacher voice' to ask people to be quiet as the noise levels were loud and exacerbated by the echos in the tunnel.   I haven't had to do that in a long time - I apologise to anyone I deafened!  Several people asked if I was teacher!  How did they guess?  Husbando said that they'd probably been able to hear me over the bridge in England! 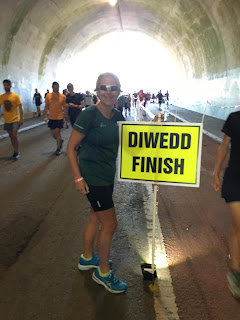 We made our way up a path onto the bridge and assembled at the start.  I didn't realise how far back I was starting until I saw this photo (taken by Ian Nelson), so was in for a slow start as I weaved my way around other runners.  Once I found a little bit of space I thought I was running quite well, but my Garmin was telling me I was running at 10min/mile pace - I've done a fair few miles this week, but I didn't think I was as tired as my legs were telling me, so I pushed harder.  Nothing, the Garmin kept telling me I was running at around 10min/mile pace.  There was very little I could do but carry on running, when I hit one mile my Garmin decided to work properly and told me that I'd run the first mile in a smidge over 8 mins!  That felt a little more like it!  The outward leg is ever so slightly up hill, nothing to strenuous but enough to make you look forward to the return leg!
The views are stunning!  We definitely wanted to run this one in good weather and we weren't disappointed this morning, even so there was a definite breeze to run into on the way back!  The finish is back in the tunnel, which seemed a very long way from the bridge by that point!  The echoes make for a great finish and will have the added bonus of keeping a lot of the volunteers warm and dry in inclement weather.  I do feel for the marshal at the turn around point in the winter - I hope there are some pennies in the budget for hand warmers for whoever has that role!  The volunteers were friendly and welcoming coping brilliantly with the 308 runners (a record attendance for this new event) and ensuring we all had a great run.  The event team had the added complication of one of the scanners failing - a fact that was evident from the huge number of 'unknown' runners initially listed in the results.  I was such a runner, but the event team dealt with it quickly and efficiently, and I was honest and claimed the position I had achieved (92nd and 25mins 07seconds) rather than claiming a much faster time!

After the run we walked back to the football club where tea, coffee and bacon rolls were on sale.  We had a quick chat with friends, posed for a 'tourist photo' and had a cup of tea before carrying on with the rest of our day.  A perfect parkrun morning!  Huge thanks to the volunteers - I had a great time.