The one where Husbando took a tumble. 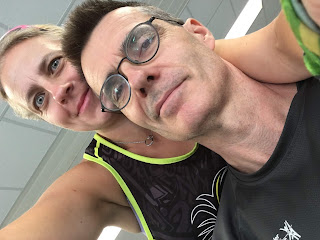 The training plan, such as it is, called for a 13 mile run today.  I could run to the next town and have breakfast but, it being the last Sunday of the summer holidays I thought that a bit of bling would be nice.  Phoenix Running had a four day event taking place in West Byfleet so I decided to enter the last day's event.  Husbando came too.  I hadn't run at this venue before and being just 45 minutes away by car we even managed a little bit of a lie in.  The race HQ was at Fulbrook School where we collected race numbers in the school's dining room before walking to the start.  The familiar Phoenix gazebo was ready and waiting for us, but this time with totally compostable paper cups rather than plastic.  I usually bring my own water bottle with me but it is brilliant to see race directors making an effort to minimise the impact that races have on the environment. 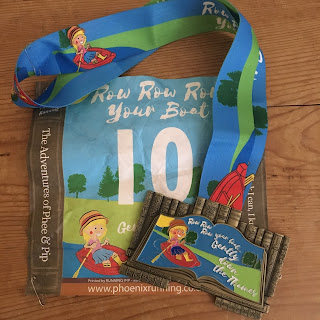 Within about 10 metres of the start a runner took a tumble.  He seems to have been made of rubber and bounced straight back up!  Given that he, and a lot of the other runners, had already run marathons (and further) on each of the previous three days I was amazed at how sprightly they all looked.  My aim was to run a half marathon and then see how I felt, maybe run walking the second half to get another marathon under my belt.  Husbando was there to run a half, but said he would be happy to wait if I wanted to run further.

The course was lovely!  Canal and river tow paths in lovely dappled sunshine.  There was a bridge. With Phoenix there is always a bridge!  This one was black and was really tricky to run up and down as it had ridges on the slopes - despite crossing it many times I never quite got it right!  Most of the path was tarmac with just a short (800m) section on hard packed earth.  The turn around point was by a boat house and, as always with an out and back course, it was lovely to see people coming towards me in the opposite direction.

The aid station was well stocked.  I was good and ignored all those lovely Haribos in favour of the bananas I had brought with me, one after the second lap and one after the third lap.  I'd only brought two with me so I have no idea what I'd have done had I decided to carry on further.  The running was going well, I felt comfortable and was enjoying myself, chatting with other runners, counting the number of boats we passed (there were 42) that sort of thing. 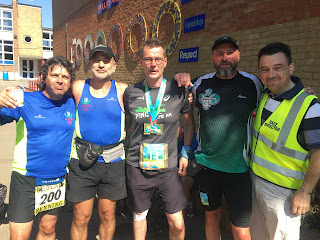 Just before I got to half way through my fourth lap, L ran towards me and said 'You're Husbando's wife - he's fallen over!' They'd been running together for the last few laps and I did wonder if she'd tripped him on purpose to get away from him!  As I passed other runners they said the same thing.  I began to wonder if we were talking ambulances, broken limbs and where on Earth were the life insurance documents any way?  I found him, sitting on the edge of the canal, being looked after by the runners in the photo to the left!  They had found a plastic chair and a first aid kit in the boat house and were patching him up brilliantly.  I felt slightly surplus to requirements, so having checked and checked again I ran on. 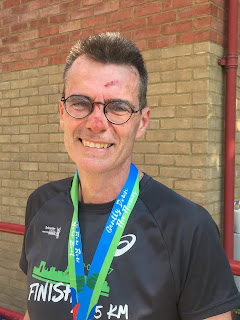 My last mile and a half were my fastest.  I wanted to get to the end so that I could make sure Husbando was OK and see if, despite stopping to check he was OK, I could still beat my previous half marathon time from this year.  A mile with an 8 at the end of a run was quite gratifying as was hearing from Rik that Husbando was fine and was walking the rest of his final lap.  I collected my medal and walked back to meet him.  He'd bashed up his face, shoulder and knee - he is going to be a wee bit achey tomorrow - and I suspect he is going to look worse before he looks better!   Thank you to everyone who looked after him today.  It really does say a lot about you all that you stopped and looked after him!  I have horrible memories of falling over at the Royal Parks Half at a really busy part of the course and being unable to get up for what felt like an eternity because people were stepping over me without breaking their pace!
Thanks to Rik and team for the superb organisation, I love this venue!  The medal is awesome with a detachable section that becomes a fridge magnet.  A fridge magnet and a medal! Amazing!