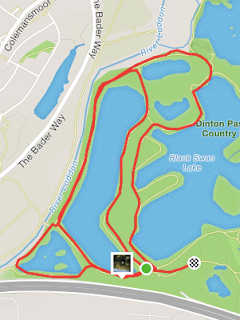 Is it just me or does this parkrun look like a sad dog?  If that wasn't reason enough for a little bit of tourism on a Saturday morning it also has a White Swan Lake, a Black Swan Lake and a Tuffty's Corner!  What is not to love?

Dinton Pastures Country Park used to be a gravel extraction site and prior to that it was a farm - the old farm buildings are still in use today as the cafe, toilets and various other businesses.  It opened as a country park in 1979 after 14 years of gravel extraction had been landscaped to create eight lakes.  As the  lakes and wetland areas were created the area was colonised by wildlife, with rarer birds, such as bitterns and smew being sighted as well as swans, coots, mallards and gulls.  There have been many species of dragon flies spotted in the area and the ponds are home to great crested newts.

The weather today was perfect for parkrun, beautiful blue skies and a gentle breeze.  We picked up a friend en route and arrived at Dinton Pastures in good time.  There is loads of parking (£1.50 per hour pay and display or RingGo) and loos just a short walk from the start.  While faffing in the carpark we spotted familiar faces from Basingstoke parkrun!  Some of the faces were the same as the faces we bumped into down at Severn Bridge parkrun last weekend!  More than 50% of the runners were running at Dinton Pastures for the first time this morning and about 5% of the all the runners were running their first ever parkrun today. 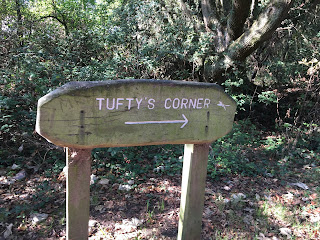 After a first timers briefing and a run brief, I did not use my teacher voice but I was very tempted due to persistent chattering, we made our way to the start.  The course is run on hard packed gravel paths, which in this weather were puddle and mud free but could get quite muddy in the winter.  We'd been told that the course was two laps, asked not to fall over (apparently at all bar one event somebody has) and warned about a 'short, sharp downhill.'  I spent the entire run looking for the short, sharp downhill and am still none the wiser!  The route felt as though it was almost entirely ever so slightly downhill!  I kept waiting for the up hill bit but it never came.  My Strava has the elevation gain as 7ft - but other people running today have the gain being as high as 33ft!

I had put my 'phone in the pocket of my running shorts, normally this doesn't cause any problems, but having lost a bit of weight recently the 'phone was just heavy enough to cause me to have to keep yanking my shorts back up, I'd like to think that this slowed me down by a few seconds but I was pleased with my time (25.13, 4th female and 1st old lady) as I'd also had to contend with a runner close to me intent on taking the 'racing line' even if it meant elbowing other runners out of the way as he cut in front of them!  He also very helpfully pinged bramble branches back at face height - pulling thorns out of my face at the end of a run isn't something I have had to do before.  I've got used to running with runners who helpfully warn those behind them of upcoming hazards - it isn't hard to do and it seems to be the safe and sensible way to act as you cannot clearly see things like tree roots if you are following another runner.

We weaved around the White Swan and Black Swan Lakes cheered on by marshals.  Without the marshals there is at least one point where I would have happily turned left instead of right.   I took a fuzzy photo to prove that is was a swan lake and very soon we were approaching the finish funnel.  A quick burst of speed (that is a relative term) saw me overtake someone just before the finish line and be given my shiny new style token, before I doubled back to find my youngest child and chivvy her along.  She was happily run/walking with one of the volunteers who was pacing a 2min run/1min walk group so my fears about her making the tailwalker's morning excessively long were unfounded!

We all reassembled in the cafe for coffee, tea, Fanta (my youngest is only 12!) and breakfasts.  Husbando and I couldn't stay long as work beckoned, but I have it on good authority, from people who have sampled breakfasts at lots of parkruns, that today's food was very good indeed!

Thank you to all the volunteers and the parkrun weather fairies for making today's run so much fun.  It is hard to believe that it is the first day of autumn today!