This morning was the last parkrun of 2018 and one where I did not have to take my DofE volunteering son to our local venue.  The small children were off to visit grandma, Husbando was leaving the house at 4.30am and taking them with him on his way to a book fair in Market Harborough.  I refused the proffered cup of tea before they left, but accepted the hugs from my youngest child before going back to sleep.

There had been some discussion about where to go.  I didn't want to set off for a parkrun miles away on my own (and not just because my car is reaching the end of its life now and the poor old girl doesn't like travelling too far).  For a while it looked like we might all go down to Henstridge Airfield - but at nearly 90 miles each way that seemed a little excessive and would use up most of the day, so in the end 2 of us, Mr B and I, decided to visit the relatively local and relatively recently established Brooklands parkrun.  Husbando was pleased about this because he wants to do Henstridge as he is a  bit of an airport geek (we had to run around Templehof when we were in Berlin) and because his grandparents lived in Henstridge.  He was also unhappy because he wants to do Brooklands being a bit of a history of aviation and motorsport geek... but Brooklands is at least close enough for an easy repeat visit!

Mr B arrived to pick me up bang on 7.45am, to find me struggling out of the door with hat, hoodie, sunglasses, gloves, rain jacket and a bin sack of rubbish - luckily the right stuff got put in the car and bin respectively and we were soon on our way.

Brooklands Community Park is within the historic Brooklands site - home to the first purpose built banked race circuit in the world and one of the first airfields in Britain. Now, I'm not terribly interested in either of those things (although I will bore for England if you start me on what it is like to fly Concorde to New York), but a quick glance at the Brooklands Wikipedia page revealed names that even I knew about; Sopwith, Vickers, Hawker and Marconi to name but a few.  If that kind of thing floats your boat (or gives lift to your aeroplane I suppose) then the Wikipedia page is well worth a look.  There is a museum you could visit and I know that Mercedes Benz World is a popular attraction - you can drive cars very quickly there I believe!

The parkrun is located in the Community park that was established by a collaboration between the local council and Mercedes Benz.  It is a mix of bits of the old runway and wooded areas with a children's play area and car park thrown in for good measure.  There are no loos in the park itself - but there is a HUGE Tesco just across the road that probably opens in plenty of time for a last minute wee stop!  We parked in the car park (free we assume as we didn't see a pay point and didn't return to a ticket on the windscreen) and made our way towards a group of hi-viz jackets assembling in the middle of the old runway.  Having attempted to cough up a lung in the car I thought I better take it easy today (memories of being flattened with pneumonia this time last year have yet to fade) so I kept all my layers on while Mr B, in shorts, went off for a warm up run.

The first timers briefing was enormous - I haven't looked in too much detail at the results but it seemed as though most people were running at Brooklands for the first time.  I did wonder why some people bothered coming to the briefing though if all they were going to do was talk through it.  After this, and the main run brief we made our way to the start. 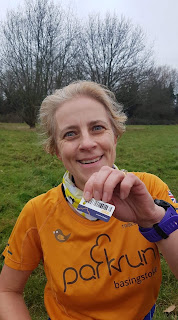 'I will take it easy, I will take it easy!' is what I was saying to myself as we waited for the signal to start.  But then I was among runners who were running, and I hadn't run for two whole days and my legs decided that taking it easy was not going to happen.  All the time my brain was saying 'Don't be silly, you are supposed to be running a long run tomorrow'  but I kept on plodding away.  The first section of each lap is on tarmac (into a slight headwind) before turning off into the wooded area.  This was muddy today, but not puddly (is that a word?) but it did seem to slow a lot of people down (that and watching out for tree roots) and I over took a fair few people in these sections before we came out, back on to the runway to run up it with a tailwind before turning back down to either start the second lap or sprint for the finish funnel.

And I did have to sprint for the finish funnel as Mr B had not only finished his parkrun but had time to retrieve his phone and stand brandishing it at me taking photos - slowing down was not an option!  I flung myself past one poor runner and across the finish line.  My efforts were rewarded with the best finish token of them all - 69!  It was also one of my fastest parkruns (23:39) which thanks to a birthday in November gave me my highest ever WAVA of 70.05%.

After barcode scanning we made our way to the coffee shop in the Tescos - we didn't see many other runners in there, but had a couple of cups of tea and a catch up about the joys of parenting: is it too late to move to a kibbutz and outsource child care to someone else?  Would I be put in charge of everyone's children given that I am a qualified teacher?

Thank you to all the volunteers both out on the course and behind the scenes who made today run so smoothly and thank you to Mr B for driving.  There are now no more parkruns until next year - but at least we get to do two in one day on New Year's Day - hopefully I will catch up with some of you in parkruns around the country/world (a girl can dream) next year - but until then I wish you all the best for 2019.