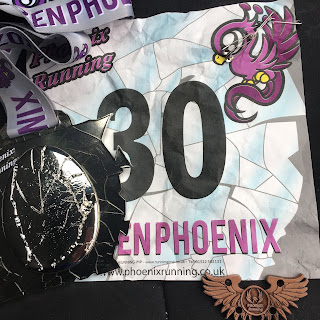 If you want to run a race well there are some basic steps one should take in preparation.  It is a good idea to train for the distance.  I haven't run a marathon since the 18th of November, but I wasn't too worried about the lack of formal training, I've made sure that I've run half marathon distances at the weekends and, when push comes to shove, I know that I can run a marathon off very little training if I have to.  It is also a good idea not to push oneself too hard the day before.  Lots of people schedule a rest day or an easy run.  Most people aren't stupid enough to achieve their highest ever WAVA % grading at parkrun the day before a marathon.  Finally, it helps to be in good health and to have had a good night's sleep.  Coughing and spluttering all night is not ideal!
Still, life is rarely perfect and, as I'd paid my race entry fee and had no other plans for the day, I set off for Walton-On-Thames and soon found myself sitting in the Xcel Leisure Centre chatting with fellow runners about upcoming races, mutual friends, plans for the new year - that sort of thing.  I still wasn't feeling the love for the idea of running.  At least it was warm and not raining!  We made our way down to the river, dumped our bags at the aid station and assembled on the tow path for the start.

I set off at a steady pace, I wanted to treat this 'race' as a long, slow, training run with bling and was aiming for running just sub 10 minute miles.  This would see me completing a full marathon in about 4hrs 20mins or a half in 2hrs 10mins.  A nice easy pace, which allowed me to negotiate the muddy patches, dogs, small children, bikes etc. with ease.  I was happy to chat with people as I ran, but spent much of the time running by myself, at the end of the first lap I collected my wrist band and carried on.  My current, back of a fag packet, race nutrition plan calls for a banana every 6 miles which on this course is every other lap.

I lost the plot a little bit towards the middle of lap two.  My chest was a bit sore, I had a busy week coming up, I'd told myself that I had nothing to gain from running a whole marathon and possibly making myself properly poorly.  I had pneumonia this time last year and I NEVER want to be that ill again!  The slightly damp air and the head wind on the outward leg of the lap were not helping me at all.  I was all set to stop at the end of lap two (6.6 miles), but as I got to the aid station I saw that another lady had just finished.  My stubborn streak decided that I wasn't going to be second lady at that distance... I would have to go on... I grabbed a banana and on I went.

Lap three came and went.  The highlight of this lap was seeing a Dalmatian in a leopard print coat!  I couldn't bring myself to stop after this lap as 9.9 miles is a bonkers distance.  I made a deal with myself.  If I could up the pace a bit I could salvage some pride from the day.  I decided that if I could finish the four laps in under 2hrs then I could stop running.  I also took the decision to run the return leg on the slightly longer route that goes along the road and not along the muddy section of the tow path - I thought I would probably be able to run faster along here and more than make up for for the slight added distance.

I never quite trust my Garmin when it comes to distances left to run!  So I just ran as fast as I could for as long as I could.  As I rang the bell I said 'I'm going to regret this - but I'm stopping!' At least I'd squeaked in under the 2hr time limit I'd given myself.  I think that is a 7 or 8 minute PB with Phoenix at this distance - although it is 15 minutes slower than my half marathon PB!  Lots of work still to do.

The bling from today's race is awesome!  Even my cynical 16 year old son said so!  The egg moves to reveal the phoenix beneath - and it is purple.  Those who have done more than one 'Frozen Phoenix' race have the added bonus of medals that interlink.  Very cool.  Today was my 10th run with Phoenix - which meant that I was awarded my Bronze wings.  You can see them in the bottom right hand corner of the photos.  These can be worn on trainers or, as I have chosen to do, used as a fridge magnet.  What a lovely gesture and reward for loyalty!  The next set of wings is at 25 events... I'll have to check my diary. 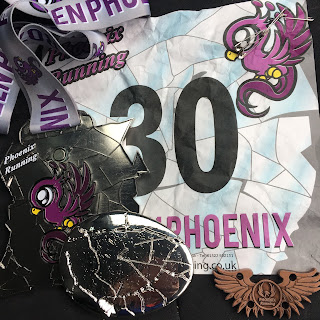 I don't regret 'giving up' when I did!  There would be something wrong with me if I thought that 'only' running a half marathon was 'failing!'  I got out, had a long run, saw loads of lovely people and still had plenty of time to go out to lunch with Husbando and do stuff at home in the afternoon!  All this while, hopefully, not making my cough any worse.  That sounds a lot like winning in my book.
Thank you as always to Rik for another well organised event, thank you to the volunteers - especially the lady who said I didn't need to diet (she should have seen my back in July!) I think I love her!