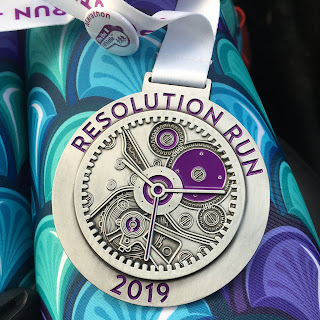 I've just looked back at the blog I wrote when I ran this race in 2017.   I haven't read it in detail (too much to do today), but some sections seem as though I could write them again!  The nature of the race calendar is that the same races crop up at similar times each year, so it is hardly surprising that I am again looking forward to spring marathons and that races in the build up to that are really just 'training runs with added bling!'  As in 2017 my target race is Paris.  We are travelling over there with a group of friends to run the marathon and celebrate our 25th wedding anniversary.  I really want a sub 4 hour marathon time.  I've talked myself out of it far too often now so something has to change.  This is the year that I am going to go for it...

So today sees me at the end of the third week of training for Paris.  My marathon plan says I should run 9 miles, last weekend I was supposed to have run 8 miles, but ran a half marathon, so thought that I would probably run a half marathon this weekend too.  Well, that was the plan.  It would mean I could get home nice and early and take down the Christmas decorations.   I set the alarm for 6.30am on the last day of my holiday and woke to read on social media that the portaloos at the aid station had been vandalised.  This threw me into a panic until I remembered that there was a 24hr McDonalds on the way to the start.  I also began to question whether the rather delicious vegetable chilli had been a sensible choice for supper on Saturday evening..... Nevertheless, I grabbed all my gear, said goodbye to Husbando and off I went, looking forward to grabbing a coffee and using the facilities at McDs - only to arrive to find that it was closed!

The Resolution Run takes place along a section of the Billy Line on Hayling Island.  Last time I was here we'd had a lot of wet weather and it was very foggy.  I don't think I saw the sea for the entire day, so it was quite a revelation to realise just how much of the course was along the edge of the water.  We all assembled at the start area, collecting numbers, chatting, sighing with relief that the loos were just about useable!  It was very chilly - much colder than I'd anticipated, so I kept my jacket and gloves on.  There was a nice 'brisk' wind off the water which prevented people from overheating!  It was also lovely and dry under foot which made a nice change from my previous trip.

The event is a 6 hour challenge.  Competitors are able to complete as many laps as they wish during that time - only one lap is necessary to get a finish time and a medal.  On this course each lap is 4.4miles long - an out and back which is probably about the flattest I have ever run on.  I ran three laps, all the while telling myself that I would stop after the third, but then after a comfort break at the end of lap three I set out again.  I've no idea why.  However, that lap took me to 17.6 miles - which is a silly distance, so it seemed that I had no real option but to carry on.  And obviously after five laps it would be ridiculous not to run a mere 4.4 more miles to get a marathon done.

I always struggle with remembering the relative positions of landmarks on lapped courses.  I always try really hard, because it would be really helpful to remember that, when you pass the bench next to the foot path sign (for example) you only have 0.7miles to the aid station.  But I can't do that even on a course that it studded with landmarks.  The Billy Line is somewhat monotonous so it is even more difficult.  I kept having to do mental marathon maths (never my best subject) to work out where I was.

It was always a pleasure to chat to other runners.  There were so many familiar faces, and even more people seemed familiar by the end of my sixth lap.  I was really grateful for the support today, as I dug deep towards the end of the second half.  I'd aimed for 10 minute mile pace, but was averaging a bit faster than that.  I wasn't sure that I could keep up that pace on minimal training (remember that this wasn't a target race just a training run).  But it seems I could.  I did have a very brief walk (about 100m) at the far end of the last lap... not sure why really, but then I decided that I hadn't needed the walk so I would have to make up the time and pick up the pace!

I crossed the line in about 4hrs14mins - my fastest On The Whistle marathon, I spend too long chatting at the aid stations!  Nothing on the planet could convince me to go out again and run another lap for the ultra... I've seen enough of the Billy Line to last me until next January at least! What makes these events work is the people and the organisation.  On The Whistle are a small, local, company run by runners for runners, so there is a well stocked aid station which is manned by people who know enough about running to know when to give you a kick up the bum or a hug, they are great at encouraging runners to exceed their expectations.  You do not have to be super fit to take part - a quick look at the results will show you that they cater for everyone up to and including ultra runners and they all encourage each other.

Thanks again to the On The Whistle team for a great day out.  The addition of a coffee van from Winchester Vintage Catering was  wonderful.  The thought of that post run cup of tea kept me going during the last lap.  Until next time....
Posted by MrsBridgewater at 19:44