Possibly the most fun I've ever had at a race. 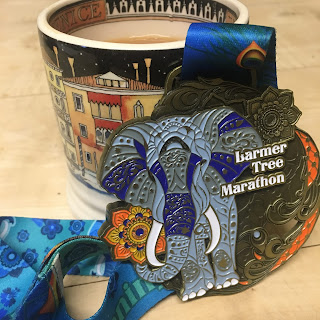 My level of planning for this weekend's main event is evidenced by the fact I was surprised when my friends said they would pick me up at 6.15am.  SIX FIFTEEN AM!  It was only then that it dawned on me that the race was starting at 8.30am and a long way away!  I got into the car having observed that it was tipping down with rain and a wee bit blowy - I'd had to go out earlier and move the blown over recycling boxes from the driveway and muttered words to the effect of 'whose bright idea was this?  I only need to run 15 miles this Sunday, why am I running a marathon?'  But I'd paid my entry fee, I knew that the medal would be epic, White Star Running always have great medals, and I have an almost full collection of the 'old style' Larmer medals (the only one that is missing is the 10 mile race), so off we set towards Larmer Tree Gardens.  The wind buffeted the car around a bit, but we could see blue skies ahead.

We parked, collected our numbers, said hello to some friends, visited the loos.  I can honestly say that I have never felt sea sick in a portaloo before today - but the wind was so strong that the loo was rocking.  It was somewhat alarming to note that six of the loos had actually been blown over!  The portaloos weren't the only casualty of the wind, the start was delayed due to a tree having been blown down, but soon we were off. 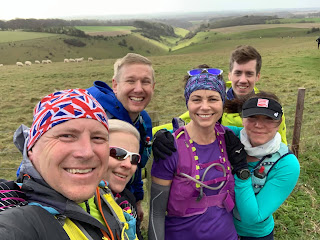 The first couple of miles were quite crowded and I was quite happy just trotting along.  About a mile in a friend (who I met at the Larmer 20 back in 2016) said hello!  I haven't seen him for absolutely ages, so it was lovely to find that he was running with a group of friends.  I asked what his plan was for the race, his reply was that they wanted to 'extract the maximum amount of humour from the day!'  This seemed like a jolly good idea so I joined them.

From then on we just had a blast!  The wind was epic, it knocked us sideways at times, it made it pointless to try and run when we were going directly into a headwind and, on a few occasions, virtually lifted me off the ground and propelled me forwards!  We walked up the hills, and into the strongest winds and ran the downhills where we could.  The hills, oh my, the hills!  I am not quite sure how I could have forgotten how steep some of them are.  We chatted and chatted, covering all sorts of topics (apologies to anyone who had to listen in), I couldn't believe how quickly the miles were passing!   We stopped for snacks and drinks at well stocked aid stations (I'd brought along mini Soreen Malt Loaves - which I think may be my new running snack of choice) and some people even imbibed schnapps and beers at the Love Station.

I felt no pressure to run fast, I was pretty sure that this was going to be slower than my previous marathon here, but I didn't care.  I felt comfortable and running (when we could be bothered!) felt natural and easy (when it wasn't into a headwind!) and was amazed that the miles seemed to be flying despite the rather large amount of walking we were doing!  The views were stunning, the weather was, with the exception of the wind, relatively kind to us.  We did have a few short bursts of hail - that really hurts and lowers the temperature dramatically.  There was mud, but it wasn't too muddy - last year we were running in the aftermath of the 'Beast from the East' when there was still snow on the ground!  This year all we had to do was avoid falling branches! 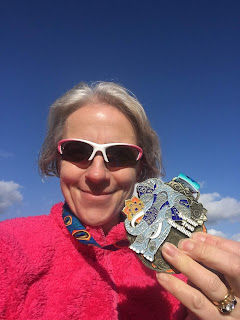 Soon we had passed the last aid station, just a flat section (that was much drier than previous years) and a longish uphill towards the finish.  We came out from behind a hedge to run towards the finish, and were hit again by the wind.  Our thoughts of running triumphantly to the finish were delayed somewhat!  We'd start to run at that sign, no, the next tree... We did run to the finish, crossing the line in a happy, laughing gaggle of hugs!  We collected our gorgeous medals and food vouchers before getting a cup of tea (a couple of us had been talk about a 'nice cup of tea' for about 8 miles) and going to collect our food.

Free hot food for the runners is a lovely touch - it also means that you get to hang around with your running buddies and chat about how amazing the race was!  I felt great, I didn't feel as though I'd run a marathon.  I thought that my time must be slower than when I ran in 2017, but looking back at the results I was 17 minutes faster this time.  It wasn't by any means a fast time - but it was a fun time.

Thanks to Andy and his team for another excellent event.  The weather can't have made things easy - I am surprised that the gazebos stayed in place, and the marshals and people on the aid station were out in the cold for hours and hours!  We really loved all the hills (honest), the route was stunning and the signage was both informative and amusing!  I'm sure we'll back for another event soon.