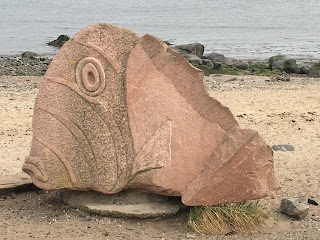 A mad dash from work to the train station on Friday evening meant that I got to Edinburgh just before midnight to join Husbando, who had driven up for a book fair on Thursday.  I barely registered my surroundings as I collapsed into bed, offering prayers of gratitude to the parkrun gods for decreeing that Scottish parkruns should start at 9.30am rather than 9.00am!  I was still less than overjoyed when the alarm went off on Saturday morning - we'd allowed plenty of time to run the 'six-ish' miles to Edinburgh parkrun.  We had a quick breakfast, checked the directions on our 'phones and off we set.  The skies were slightly grey and foreboding, but the promised rain seemed to be holding off.

Plodding along at an easy pace we tried our best not to whinge about 'all the bloody hills' we were going to have to run up on our way back into the city after  parkrun, the route we plotted had some interesting bits, through Princes Garden for example, but a long stretch of the route was along the A90 Queensferry Road and through residential areas.  A wee bit dull and we were both thinking that jumping on a bus to do the return journey might be a very good idea. 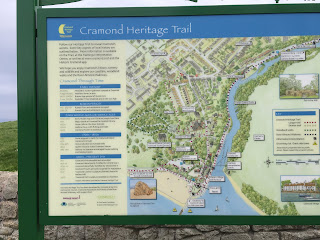 At one junction we stopped to check the route on our 'phones.  A taxi driver slowed down and asked us if we were heading to parkrun - we confirmed that we were and he pointed us in the right direction - downhill to the beach!

Cramond is to the northwest of Edinburgh - Miss Jean Brodie spent much of her 'prime' in Cramond visiting Mr Lowther and one of Ian Rankin's "Rebus" novels was set there too - although I can't remember which one... might have been "Fleshmarket Close."  The beach is home to an 8 tonne carved stone fish, a sculpture created by Roland Rae that used to be on display at Holyrood Park and then at the Falkirk Wheel.  There is also a poignant golden bicycle on the promenade.  A little bit of research suggests that it is part of a scheme to raise awareness of childhood cancer.   I couldn't look at it for very long. 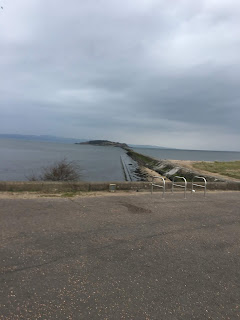 We made our way to the start, chatted with a man from Tooting/Clapham Common parkrun, listened to the first timers' briefing and then waited for the start.  We thought we were quite close to the front of the pack but suddenly eleventy billion runners appeared from nowhere and we were very much towards to the back of the field.  We weren't too worried - we had 6 miles (and I may have had a few G&Ts on the train the night before) in our systems.  The run briefing was the quietest run briefing I had been to for a very long time, 649 runners listening in virtual silence as we were welcomed to the parkrun.  Milestones (both arbitrary and real) were announced and applauded and then we were off. 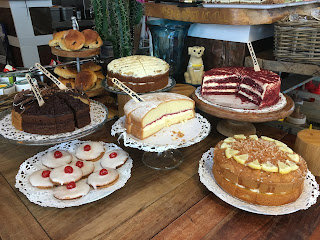 It took forever to get going.  Note to self: get closer to the front of the pack old girl!  The route is an out and back along the promenade.  As I ran the 'out' part I was mildly concerned about how the front runners would contend with the seething throng of runners as they attempted to run back to the start.  I needn't have worried though - a loop at the end of the course meant that this problem did not arise.  Anyway, after walking the first 10m to get past the start line I ran a fairly sedate first mile, overtaking people and watching Husbando almost vanish into the distance, as we rounded the corner the headwind immediately made itself felt.  To be fair, we had been warned about this during the first timers' briefing - it really did take my breath away.  The path was wide and flat, the views over the water were lovely and running felt relatively easy.  I was overtaking people all the way up to the finish - which is always a lovely feeling - but I didn't manage to catch Husbando finishing 37 seconds behind him.  More importantly I was three seconds slower than my overall parkrun PB.  Gutting!  Had I realised what a fast course it would be I would have made sure that I started a lot nearer the front.    The long finish funnel was well organised and runners kept moving down the line to collect their finish tokens and get their barcodes scanned. 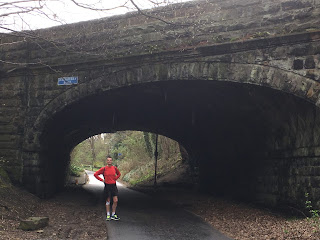 Once we'd been scanned and collected our discarded jackets we made our way to the Boardwalk Beach Club  where I resisted the fantastic array of cakes, settling for a pot of tea, while Husbando inhaled a bacon roll and a cup of coffee.  We chatted with other parkrunners and learnt that there was a slightly shorter and more interesting route back into the centre of Edinburgh.  We thought about it and decided that, as the training plan called for a 12 mile run this weekend - which was unlikely to happen on Sunday due to being stuck in a car all day, we really ought to just get on with it and run back. 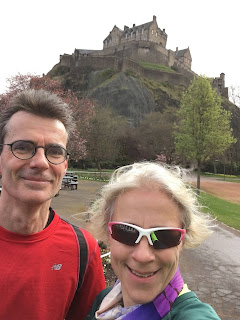 The run back took us back along a cycle path that follows a disused railway line.  Husbando was thrilled!  He was even more thrilled that we passed though two old stations... I hate to admit it, but I don't think I'd have noticed the platforms if he hadn't pointed them out to me.  We encountered many rugby fans making their way to Murrayfield so had to do some weaving to avoid collisions, but following the path was a lot easier than having to keep checking which way we were going.  It was also a lot flatter than the route we had taken earlier in the day.  We finished our run just short of out hotel in Princes Garden - stopping to take selfies with the castle in the background!

Huge thanks to the volunteer team for making today's run happen.  A flat course that has the potential to be very fast - it - I thought it was great.   Thank you one and all. 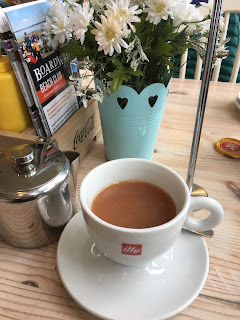