Revenge of the Fifth 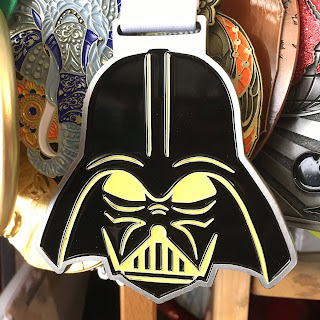 I am not a Star Wars fan, I don't dislike it, I've just never watched any of the films and have never really bought into the hype, but I do love an On The Whistle event!  They are never too far away from home, they are always well organised and are full of friendly faces.

Today is the 29th anniversary of the day Husbando and I met, and out friends' 29th wedding anniversary - so it seemed a good idea to celebrate with a little run.  The plan was that we would all take part, but Husbando was injured so in the end it was just the three of us.  It has been quite a few weeks for all of us.  We all ran Paris, and we all ran at least a marathon distance last weekend, I managed a course PB at Alice Holt parkrun yesterday - it is fair to say that all of us had slightly tired legs...but probably not as tired as the legs of the people who had run at On The Whistle's 'May the fourth be with you' run yesterday!  Nevertheless, none of us are getting any younger, and we felt that we all deserved a bit of a rest this weekend. 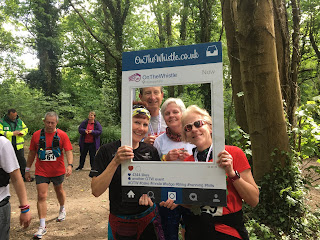 The weather looked glorious from the safety of my bedroom.  Once outside it was clear that it was surprisingly chilly, my decision to wear shorts looked a bit daft, but at least I could skulk in my car until minutes before the start, this did mean I missed out on chatting with friends, but warm legs won out!

After the race brief I found myself at the front of the runners waiting on the start line and consequently started off much faster than I had planned, but my legs felt ok, so I kept going.  About 15 minutes in I decided that I needed the loo - and as the nearest ones were back at the start area I was quite happy to be moving quickly!  I said hello to old friends and chatted with new faces as I ran.  The joy of an out and back is that you see the same people lots of times.  After a quick loo stop I thought that M (who ran Nohtaram Eht with me last week) might have overtaken me, so looked forward to catching him up. It soon became evident that he hadn't.  My pace was still a little bit too fast for a 'gentle run' but I had fallen into pace with two blokes (one from Gosport Runners) and we were chatting about races and goals etc.  We'd just navigated the one muddy section when I saw a figure running towards us waving...it took me a few seconds to realise it was a friend of mine.   I stopped for a chat and then M caught me up - he stopped for a chat too before we carried on together. 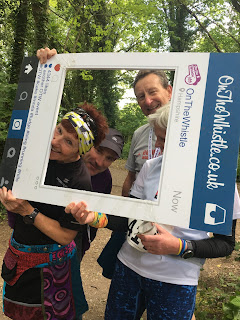 M and I ran the rest of that lap and the next two together, chatting about all sorts of rubbish.  It is amazing how much shorter the laps seem when you are distracted by conversation!  M was adamant that he was only doing a half marathon (i.e. four laps), I'd started the day uncertain of what I wanted to do, but the thought of four more laps on my own (potentially) didn't appeal, so I was happy to stop when he did.  We bought coffees from the Really Awesome Coffee Van and waited for the last member of our group to finish.

One of the best things about a half marathon is that you can still walk when you have finished, you also have the rest of the day to do stuff in!  You still get a fab medal (today's medal glows in the dark) and the smug feeling of having done some exercise, but without the legs like lead feeling!

It was great to see so many friendly faces today - some of whom I haven't seen for a while, but I was getting pretty chilly rather quickly so after hanging around for about 45 minutes I decided to go home and get warm!  Thank you to Kiernan, Claire and Del and their team for a great morning - I'm sure I'll be back again soon for more!