We all know that there is only one marathon that counts.  Only one marathon that is 26.2 miles long, and being that long is the longest and toughest race in the whole entire history of the World.  It is a fact, universally acknowledged that London Marathon is the only marathon that matters... or so it seems at times.  It is invariably the one you get asked about the minute anyone knows you have run a marathon.  In fact this morning I was put on the spot in staff briefing when the head asked me to tell the assembled staff how I had got on in 'The Marathon!'  I had to explain that I had taken part in something far more esoteric... Honestly, the lengths I will go to to avoid having to put up with Husbando's pre-race faffing have reached a whole new level!  He did have a place and I was thrilled for him, if a little (lot?) jealous.  I'd run the race in 2017 and have fond memories of the amazing crowds, seeing friends on the route and chatting to lots of other runners and, while I was happy to be there to support other runners I didn't want to totally miss out on the running fun.

I remembered hearing about groups of runners who ran the route in reverse before the official race started.  In previous years this sounded like the stupidest of stupid ideas but not this year.  I had one friend who also thought it might be fun, be we didn't want to run by ourselves - we might get lost or, possibly worse, run out of things to say to each other! I asked some running friends who had heard of such madness but didn't know about anyone doing it this year, so I resorted to Google and Facebook and stumbled across a Facebook group set up by Impact Marathons.  I'd never heard of them, I didn't have time to do much research and what was the worst that could happen if I arranged to meet a group of total strangers in the middle of the night in central London?

After an early supper and a second gin and tonic (a nightcap obviously) M and I retired to our beds at about 8.30pm, telling Husbando to be quiet when he returned to the hotel room and setting our alarms for 1am.  I am not sure about M, but I was still wide awake at 11pm and think I probably fell asleep about 20 minutes before the alarm went.  At which point I was very glad I had gone to sleep in my running kit - it saved a lot of thought.  A quick 'breakfast' and a cup of tea and then we laced up our running shoes, grabbed our ultra vests (stuffed with snacks and water) and headed off along The Strand to meet 'everyone' by Nelson's Column.  What surprised me is that our group included at least two people who had never run a marathon before. 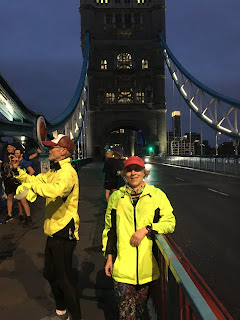 It was cold, bitterly so in the wind, so it was a relief to move towards the finish line on The Mall after a brief welcome from Nick (from Impact Marathons).  We were reminded that this was an informal, unofficial event, that we should respect the security measures in place, not be idiots and to have run (I paraphrase - but that was the gist!)  On The Mall the finish gantry and barriers were in place and I thought that this would be the case for the whole 26.2 miles and that getting lost would be impossible.  We set off at a fair old pace, considering that as a group we were supposed to be aiming for between 5 and 6hrs!  We passed nightclubs where people queuing to get in at 3am - they thought we were mad to be out running.  Our part of the group were probably going a little too fast, hitting 6miles in under an hour and then realising we couldn't see the 'thin blue line' anywhere.  To be fair a broken dark blue paint line is rather tricky to spot on a wet tarmac road at night, but we had no idea where to go now,  no amount of looking at maps on phones seemed to help, so we waited for the others to catch up and then got ourselves pointed in the right direction again.

About this time it started raining.  It was fairly persistent and not terribly pleasant when combined with the remnants of the wind from Storm Hannah, I was very glad of my oversized, cheap as chips, Primark jacket!  The mood was upbeat, there were lots of new people to chat to, lots of interesting stories to hear, for me there were lots of day dreams about traveling to run marathons in exotic locations as I learnt more about the way Impact Marathons work, the pace, being slower than my recent marathon, felt easy and my legs felt good.    My stomach was another matter!  It was not happy about being asked to deal with food and exercise in the middle of the night. 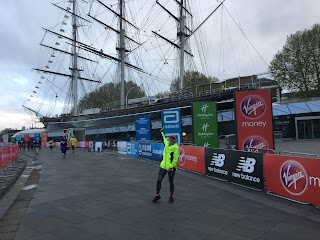 We got properly lost in Canary Wharf...we managed to add an extra two miles to our journey, obviously we were very keen to get our money's worth out of a free event.  Once back on track we were rather more cautious about the route and I managed to stay on track from then on.  We met up with more runners at the half way point, just before crossing Tower Bridge - an opportunity for photos that could not be missed.  The roads were surprisingly busy, but the pavements were quiet!  We saw the occasional reveller wobble their way back to the night bus, had several shouts of 'You're going the wrong way' and 'You're too early' from passing cars and, from time to time, saw other groups of runners who were also enjoying the novelty of running in London at night.

Once south of the river following the route was much more straightforward.  It was starting to get lighter and towards the very end the stewards were starting to populate their marshal points.  Some of them looked at us with utter bewilderment, others cheered us on, and I must mention that at one point on the route (I think on the Isle of Dogs) two ladies were out with Jelly Babies supporting runners at 4am!  Was possibly the most delicious Jelly Baby ever!

We saw foxes in Beckton - the bravest foxes that I have ever seen, they were only a couple of feet away from us and totally unperturbed by our presence and listened to the dawn chorus, it was all rather surreal!  I had forgotten that the first few miles of the London Marathon are downhill.  This meant that the last few miles of our run were decidedly up hill.  There was a little less chat going on now as we were all knuckling down to get the run finished.  I felt more awake than I have done for a long time, and enjoyed chatting to a lovely lady called Rachel (and eating her crystallised ginger) as we chased down the final couple of miles.  We were so eager to finish that we managed to pull a 7.30min/mile out of somewhere for the last mile! 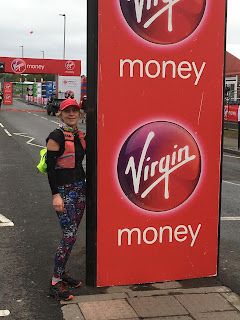 We couldn't quite get to the start line.  The officials at the start were very pleasant and friendly, but on that they were not budging.  We had to stop about 50m short of the line, it is just as well we had some extra distance in the bank from earlier, I'm not sure running out and backs to make up the distance would have been much fun!  A lot of our group were going on for breakfast after the run, we couldn't join them due to needing to get back into central London and the fact that a breakfast would be wasted on me so soon after running that far!  I was amazed that so many runners were already assembling at the start area.  My friends and family always ridicule me for getting everywhere far too early, but even I wouldn't show up at 7.15am for a race that starts at 10am!  This flow of runners from the station was very useful as we used them to find our way to Blackheath Station, via Costa for a much needed cup of tea.

The small world of running was in evidence again.  We bumped into one friend in the coffee shop and another (who lives in my tiny village) on the way back to the station.

Would I do this again?  Yesterday my answer would have been 'Hell no!'  I was glad that I had done it, but it really brought home to me that a big part of 'the London Marathon experience' is the crowd support.  Running at night was fun, enjoyable, a great way to meet people, but it struck me that vast sections of the route are a bit dull!  Today I am not so sure... I could probably be tempted to give it another go.  It was nice to run with no time pressure, where everyone was happy to stop and wait while we worked out which portaloos weren't locked, and the main aim was to get to the start in one piece!

Thank you to Impact Marathons for giving me the opportunity to do this mad, mad run.  I'll be looking at your website when I get a few spare minutes and dreaming/planning to join you again I hope.  Thanks also to M for your company.