.... I did OK-ish!
Up early this morning (woe, alas and on a Bank Holiday too) to get the children to their grandparents' house and catch the 7.14am train up to London. Good old rail company was offering a Saturday service but not charging 'off peak' rates for trains or car parking. As I boarded the train I spotted two women toting the 'official' kit storage bags, and at every station on the way more race bound people joined the train. I was reminded of the Philip Larkin poem 'Whitsun Weddings,' and if I were cleverer I would be able to pen a witty parody on the theme!
By the time I arrived at Green Park, runners were streaming out of the station, and my first thought was, "Where is the lovely warm weather we were promised? It is bloody freezing!" My second thought was, "Oh! Look! More Elephants!" I had a quick dash around the park to take photos of the ones I could see - and as I don't have a photo of me yet (will have to see how awful the official race ones are) this lovely elephant will have to do for now! 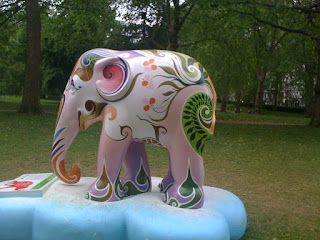 The race seemed well organised, plenty of loos, lots of race photographers, very efficient baggage store arrangements. I chatted with several people as I made my way to the start line. I was keeping my eyes open for a cyber buddy from Running4Women but didn't manage to spot her in the 13,000+ runners assembling in Birdcage Walk. Last time I was in Birdcage Walk on foot was for the Queen Mum's 90th birthday celebrations, I was part of the Honour Guard for the ULOTC and we had lots of Japanese tourists snapping photos of us. I seem to recall that it was a blisteringly hot day on which to be wearing dress uniforms - very different from today!
The start was well organised - after the elite athletes we went off in 9 waves. At the start of our wave the 'celebs' started too. I have to admit that I didn't recognise any of them.
My start was not too great. I hit the 1km marker at 4minutes (by my watch), way too fast for me to sustain over another 9km, I consciously slowed down - but that was hard as the support was great and my legs felt good. Between 2 and 3km we met Mo Farah coming back down the other side of the Embankment (his 8km) - he looked fantastic, making running look so effortless as I plodded along like an elephant! Good hearted cheers for the elite athletes as we passed them and I am not surprised to see that Mo completed the race in 27mins 44 secs and broke his previously held British 10,000m record as he looked in fine form.
Water at 3km - why can't people throw the empty bottles to the side of the road? I'm not mad on playing hopscotch at the best of times!
Running through the City was fun! I see that there is a House of Fraser in what used to be a branch of the bank I used to work for, we passed old watering holes, and survived the cobbles of Leadenhall Market. The support from spectators was excellent throughout, lots of cheering. It was the first time I had put my name on my vest, and I am glad I did! Thank you to all the lovely people who shouted 'COME ON TORIA!' It really does make a difference, if only that you lift your head up to see who is shouting and smile at them.
Between 8 & 9km there was a group of high viz jackets at the side of the road, human nature being what it is, I think we all looked as we passed. And then wished we hadn't. A quick glimpse of a man being given CPR. I hope he is OK. My thoughts are with him and his family today.
The last part of the race seemed very hard, I'd already calculated that there was no way I could beat my PB (52 mins) but that I was ahead of where I thought I would be (54mins) and the fun of running seemed to have vanished - all the supporters were cheering us on, not knowing that there was a very sick man just a few hundred meters away!
I think I finished in about 52mins 45 secs, so not too bad. Will have to wait for the official times to come in. I'm glad I did the race. It was a lovely flat route, but very busy all the way around. The organisation was great at the finish too and, although I didn't meet up with my cyber buddy Carol, I met some friendly people to chat to!
I'll definitely put this one in my diary to do next year - but don't think I'll be catching up with Mo any time soon!
Posted by MrsBridgewater at 15:08