Yesterday was Elaine's birthday!  She decided to help out in true parkrun style by helping to organise the very first Newbury parkrun!   The thermometer in my car hit -12ºC on the way over to Newbury, but was a positively balmy -8.5ºC when I arrived.  This was the first time I had run for almost a week. I've been coughing and spluttering for NATO all week and a wiser woman would probably have stayed in bed! 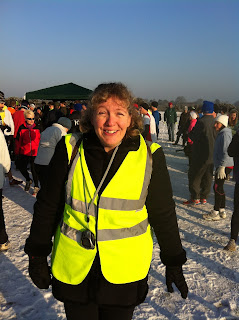 I decided to brave the elements for several reasons.  First, this was a brand new parkrun.  What could be more exciting?  Second, it was Elaine's birthday and I am too cheap to spring for a postage stamp for her card.  Third, I wanted to support Colin, Elaine and the rest of the Newbury parkrun team.  Fourth, I wanted to see if I could still run in preparation for a race today.  Fifth, Elaine had mentioned cakes and sixth, I've never been to Greenham Common and I wanted to go there! 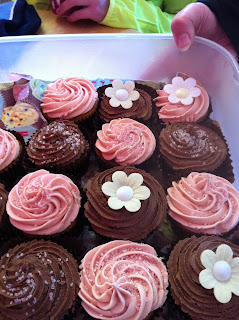 The start was well organised and hugely busy!  The picture below doesn't show many people - but I like the light!   Cold, clear and very bright best describes the weather.  The snow made lovely, crunchy noises beneath my feet, and I think we were all eager to get going before we froze to death. 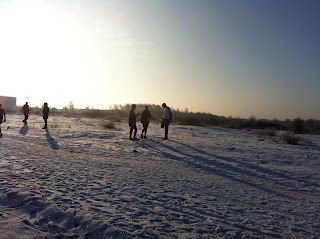 The course is a single loop of the old USAF Airforce airfield.  I am sure it is a stunning place to run - the glimpses I caught when I looked up were beautiful.  The place is being reclaimed by nature.  In the snow, and in the absence of trail shoes, I did find I was spending a lot of time looking at my feet.  Snow blindness was a very real risk, the sun had some warmth to it once we got running.  A record breaking total of 317 people turned up to this inaugural event.  Staggering given the weather!  Coffee afterwards at the Coffee Exchange was very welcome (thanks to Rohan and Nick for the coffees!) and I am sure they aren't regretting their decision to open on a Saturday morning to catch the parkrun trade!  Elaine's birthday cakes tasted every bit as delicious as they looked.  I ate two, just to make sure!

I wish Newbury parkrun well and hope to be back soon to run it in warmer weather.

Today, after another night spent coughing, I woke up without a spring in my step to get ready for the Bramley 10.  I had been checking the website in the same way that children check school websites at the first sign of snow.  Surely, given that we haven't had a single snow day all year, Bramley would be hit by some freakish weather conditions and be called off?  No such luck!  I know that no one was holding a gun to my head forcing me to run, but once I've signed up for something it seems really hard not to have a go. 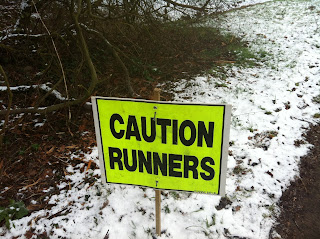 I parked my car in the first car park I found as I approached the race start.  This was not clever.  It was a mile from the start, which was fine on the way to the start, not so good on the way back from the finish!  The start area was thronging with people, apparently there were 1600 runners, most of them doing the 20mile race.  I kept my eyes open for people I knew, spotted Maura almost instantly (and as she was 'phoning to ask where I was!)  It was her first 10mile race - so a very big day for her.  I'd decided to treat this 'race' as a normal Sunday run - not worrying about time (although I wanted to finish faster than any of the 20 mile runners) and to make it more of a normal run I had my iPhone and headphones with me.  Because I was listening to music I think I missed most of the announcements pre start, but as it was chip timing it didn't really matter!

The run was hard.  I felt as though everyone was overtaking me, and my legs and lungs were screaming at me to stop.  Looking at my time on my Garmin was demoralising - I know that I look at it more when I feel I am not running well, which throws me into a bit of a downward spiral!  That said, I did the first 5k in a better time than I did parkrun yesterday!  The route was fairly flat, but in a way that the downhills were negligible, but the uphills required an inordinate amount of effort!  At 5 miles one of the women running near me announced that she was 'just popping down here for a pee!' (pointing at a footpath).  From that point on, I was convinced I needed a wee.   I ran with one eye on the hedgerows looking for a convenient gap (which never appeared).  I didn't need a wee.  It was just my stupid brain playing tricks on me!  I never felt as though I'd got into the rhythm of this run, my pace was all over the place, and I just kept telling myself I'd do 'one more mile' and then think about stopping.

I realised today that I now know quite a lot of local runners!  Several people said 'Hello' as they passed me and as I approached the finish I heard my name being called out - I checked to see if I was wearing a top with my name on, I wasn't, it was fellow parkrunners, most notably the members of Chineham Park Running Club who had turned up to support fellow members and were more than happy to cheer on anyone else they recognised! 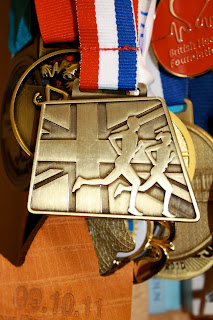 I finished strongly - suddenly finding a bit of energy and enthusiasm for this running lark, crossing the finish line in a little over 1hr 28mins.  I am really quite pleased with that time - it is less than 2 minutes slower than my 10 mile PB.  I hung around a the finish to cheer on the others.  I saw the first 20 mile runner fly across the line in about 1hr 43mins - a new course record!   It was lovely to chat to people I know after the race.  Far nicer to share 'war stories' with people than to slope off home by myself!  The goody bag contained a trapezoid medal, chocolate and (most welcome because I had put my favourite water bottle down somewhere) a drink!  There was also an energy gel sachet - which will end up being thrown away as it passes its sell by date - and several inducements to enter yet more races!

The walk back to the car was a killer!  Never has a mile seemed so long!  I collapsed into the car, relishing the heated seats.  A quick dash around Sainsburys on the way home required the deployment of a shopping trolley in Zimmer frame mode.  What amazes me now is the big smile on my face.  I am so glad I did it.  I would have hated myself if I'd backed out!