What glorious weather for running!  First run of the year where I was glad I'd remembered my shades! 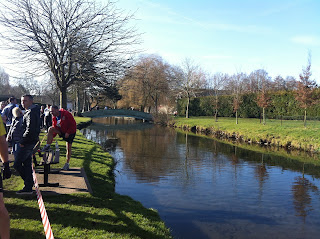 Ignoring the fact that all race organisers send out blurb saying 'At risk of death, excommunication and forfeiture of all Nectar points you have earned and will ever earn in the future do not run if you have had a cough, cold, renal failure, transplant surgery or amputation in the week prior to race day' I decided that having been given the number 69 I had to run this race!  Who knows how long it will be before I ever get this number again?

The starting area  for the Winchester 10k could hardly be more scenic, but the organisation was not great.  There were 6 ladies' loos available - and these were in the Winchester Leisure Centre so I can't think that the regular Sunday morning gym users and swimmers were too pleased by the influx of lycra clad women  all desperate to use the loos within a 10 minute window!  You cannot have too many ladies' loos.  Organisers would do well to think of a number and then double it!

The start line itself had the normal 'Start here if your finishing time will be....'  These started at 30-32 minutes and finished at 40 minutes!  Never in a million years will I finish a 10k in 40 minutes.  Great way to make those of us who run primarily for health, fitness and enjoyment feel like we are part of the race!  Still, it was pleasant to stand in the sun for a change, rather than shivering, as we waiting for the off.  The race was advertised as being 'chip timed' so I wasn't too worried about where I stood at this point.  I did that daft thing of looking at the people I was standing with and trying to gauge how fast they would be - was I in the right place, would they leave me standing?

I was vaguely aware that the race had started - a couple of whistles and a surge forwards.  I shuffled with around 1000 other people over the line, and as I crossed it I realised that there was no timing mat at the starting line.  Why hadn't I noticed this as I made my way to the start? Why hadn't I made sure I was nearer the front of the pack?  Why do race organisers advertise a race as 'chip timed' when they don't have the facilities to record the starting time of each runner as they pass the start as well as the finish?

Crossing the start line was slow going, hampered by a 90º left turn over a narrow bridge.  Those of you who were at school with me will remember the bridge over the Jordan - the bridge today was a similar width to that  - tricky to get hundreds of runners over that at any more than a bimble!    From there it seemed as though it was uphill most of the way!

I'd run a slow parkrun yesterday and am generally not running well due to poor health and too much food, so I wasn't holding out great hopes for today.  Just as well really.   The hill at about 2 miles in was tough - I saw a lot of walkers, but my downfall was at the bottom of the downhill afterwards.  We'd been running down a residential street and all the runners were still quite closely bunched.  I was following the runners in front of me, so when they veered left  over a grassy verge so did I.  What I didn't see, until too late, was the 4' drop!  The guys in front of me leapt down it, I tumbled!  No damage was done, except to my dignity!   I didn't stop at the one water station, but do remember thinking that there weren't many people there to hand out water.

The roads we were running on weren't closed, and it did seem quite busy with traffic at times.  I pulled out to overtake and heard the blast of a horn, so thought better of it!  The 'incline' from 3 to 4.5 miles was interminable!  Again, lots of walkers here, but I just plodded on, slowly but surely getting closer to the finish. 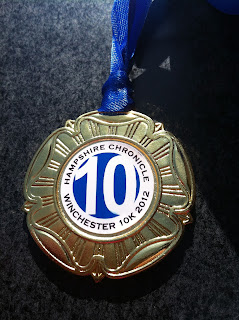 Finishing was great.  I was so relieved to see the finish line and claim my medal!   Great to meet up with fellow runners after the race and discuss war stories!  Well done to those who managed a new personal best today.  To say that I am envious is an understatement, but I am still pleased for you too! 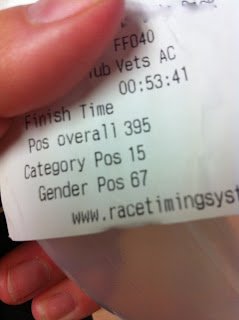 My 'official' time is shown above.  A bit naff, but I had said I'd be happy with anything under 54 minutes, and my watch (start pressed as I crossed the start line and again at the finish) shows a minute less than that.  I am very happy with the positions (hmm, should I say that when my bib number was 69?) so all in all, it was worth getting out of bed for!

My intended diet, started after seeing photos of me at parkrun yesterday (and no, I will not provide a link to that) took an immediate hit when I met Husbando and friends for lunch!  I think I can give myself a pat on the back for giving away about a third of my pizza, but I did make vast inroads into a bottle of Shiraz.

Ah well, diet starts tomorrow!  Will be interesting to see if weight loss results in faster times.  Physics says it should!