Not all miles are the same...

One of my favourite running routes has the advantage of mile markers, from the annual Alton 10 race, painted on the road.  With the exception of the 4 mile marker (which appears twice, once a bit early and once in the right place) they are all where they should be.  I know, I've checked with my Garmin!  But they don't all seem the same.  I swear that the third mile is well over a mile, it starts halfway up a hill and finishes after you pass through a village.  The other long mile is between the 7 and 8  mile markers - which should be wonderful as this is the highest part of the race with stunning views across the countryside.  It also has some lovely downhill sections, and on a day when it isn't blowing a gale you can really pick up the pace and fly along.  But it seems so long.  Conversely, the next mile seems short. No idea why, it just does.  And always will every time I run this route now. 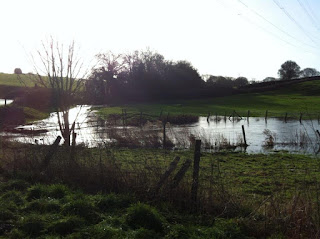 Today's 10.5 mile run was lovely.  I downloaded an audiobook to make a change from music ('The Hard Way' by Lee Childs if you are interested) and set out, no need for gloves today.  In fact I needed my sun glasses and got a wee bit warm wearing long running tights and a long sleeved top!  There were far more people out and about than I saw last week.  Cyclists, walkers, horse riders and runners all taking advantage of the ice free roads, mild weather and the sunshine!  The rain overnight and early this morning meant that all the show had gone, the river had burst its banks (see photo) and most of the roads were more like rivers than tarmac!

I run this route regularly, the biggest hazard is drivers.  Slow moving farm vehicles are one thing, you can hear them coming from a long way off.  What provides more of a challenge is drivers who don't seem to realise that country lanes are not the place to be driving at 60+ mph around blind bends.  I've become quite adept at throwing myself into the hedgerows - in fact one of the advantages of running in the winter is that long sleeves and trousers mean less chance of nettle rash!  Today's highpoint was when I jumped up onto the muddy verge to avoid a HUGE puddle and an oncoming car only for the car to SPEED UP as it went through the puddle and soaked me from head to toe.  Nice. I was 4.5 miles from home at that point so had no option but to carry on.  If I want to go running and get covered in mud and water I'll go trail running.

Today's run takes me to just over 115 miles this year, a wee bit up on last year's total for the whole of January and, at least at this early stage, on course to meet my mileage target of 1200 miles this year. 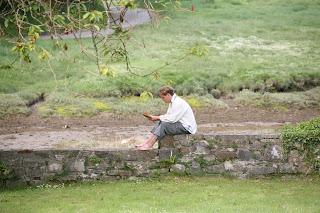 In other news... I mentioned in an earlier post that I had entered the first Yorkshire Marathon.  I've decided to run this in memory of my friend Ali (that's him in the photo).  Ali's unexpected death, at the age of 42, back in November has left a huge gap in the lives of all who knew him.  He was a thoroughly good bloke, a real gentleman and fellow grammar pedant.  I still can't quite get my head around the fact that I won't see him wandering around town with a take out cup of coffee in his hand and his beloved, mad, dog Percy at his heel.

After talking to Ali's family, I have decided to raise money for a local charity, Cardiac Rehab.  This charity was started by a local doctor (and runner) and the methods the charity developed have been adopted by health authorities across the country.  I've set up a fundraising page HERE and would be very grateful for any donations you feel able to make.