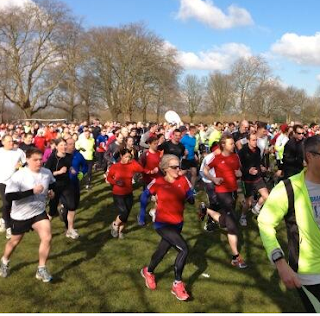 Check the spelling... 'Old Deer parkrun' is not an event organised just for aged runners!  Runners of all ages gathered at Old Deer Park today for the final run in the adidas BOOST tour.

Last week, at Pymmes parkrun, I was one of 14 runners, and to be fair Old Deer parkrun normally has between 30 and 40 runners.  This week, as you can see by the photo (thanks to Martin Yelling for getting a picture of me) was slightly different.  Adidas have been touring various parkruns over the last few week with their new Boost trainers and for the last run in the series something special had been planned!  I would name all the athletes who were there as part of the adidas team - but I will leave someone out by mistake and risk upsetting them.

I persuaded a friend, who normally runs at Alice Holt parkrun, to join me in today's outing.  Two of my partners in crime from last weekend were meeting me there, as I was taking two of my boys with me as well as a friend it made sense to take my own car.  Our final partner in crime was not allowed out to play as it was his younger son's first birthday party and naming ceremony this afternoon and his assistance was required closer to home*.

Soon after parking the car I was reminded that, despite having many thousands of registered runners, parkrun is a very friendly community.  I saw an Andover parkrunner (who I first met at Killerton parkrun) and said a very quick hello as we both looked for the nearest toilets!  After we crossed the A316 using the foot bridge (which thrilled the boys and terrified me) I bumped in to the best marathon support duo ever!  Hugs and squeals all round!  There were lots of people standing around in the sunshine.  It should be mentioned that sunshine has a novelty value this year.  Normally by the beginning of April most runners would be in shorts and vests/t-shirts.  This year they were still very much in the minority, but it was sunny and the sun did actually have some warmth in it!

After a run briefing that I have to admit to not really listening to as I was refereeing between my two boys we proceeded down to the start.  There were hundreds of us!  The only bit of the run brief that I had heard was that we were running two laps rather than the normal three.  The start saw us running up a very gentle slope for about a quarter of a mile, having spotted the finish funnel (which you couldn't really miss because it was huge!) I worked out that we would have to run up it 3 times in total, thankfully it was a very gentle slope!

The course was entirely on grass, the sort of grass that makes me very glad I gave up playing hockey!  It was hard packed, but ever so slightly uneven.  Just the sort of ground that I fell on last summer and injured my foot.  I was glad that I had worn my road shoes rather than my trail ones, as I think the cushioning was more useful than the grip of trail shoes given the mud free state of the route.  One gentleman had decided against shoes altogether, running barefoot.  The mother (aka worry wart) in me does hope that he didn't step in, or on, anything nasty!  The route, rich in 90º turns, was well marshalled by cheerful and cheering volunteers.  Danny Norman, host of the parkrun show podcast, made my boys' day by recognising them as he carried out his marshalling duties.

I ran quite conservatively.  I almost matched my pace for the first 2 miles of Pymmes parkrun, but in the absence of a smack down between me and another runner I carried on chatting to fellow runners and failed to pick up the pace for the final mile.  I didn't think I'd run fast, because I don't like grass, but I do think I could have worked a bit harder!  I finished in 24min44secs.   After filtering through the finish funnel and collecting my token, I set off back around the course, clockwise this time running alongside the runners but in the opposite direction, to find the boys.  I shouted words of encouragement to people I knew, and to anyone who looked like they were about to give up.  I passed my older boy and ran on to find the younger one, meeting up with him about half a mile back down the route.  He graciously allowed me to carry his water bottle and tracksuit top and begged to borrow my sunglasses (knew I should have gone for a pink pair) and we jogged on to the end.

It was lovely to be able to stand around after the run, rather than dashing off to avoid frostbite/getting even more drenched!  And a lot of the 553 runners (a new attendance record) did stand around and wait.  Prizes were on offer - and runners seem to like prizes almost as much as they like running!  Prizes included adidas trainers and clothing, personal training plans from Liz Yelling, places in the Bupa 10,000m this year and the Silverstone Half and VLM Marathon for next year.   Although I wasn't among the lucky few we all had a very good morning, culminating in coffee and chat at the cafe in the adjacent sports' centre.  My boys had scampi and chips for breakfast and seemed to think that this was the high point of the day!

In addition to breaking the attendance records, I note from a brief perusal of the results page that both the male and female course records fell today too!  No doubt several new age graded records were set too - but it is Saturday evening and my head will explode if I look at too many numbers on a Saturday evening!

So what's next?  Well, a gauntlet was thrown down when my fellow Basingstoke parkrunner said 'You could do 5 different parkruns in 5 weeks if you tried a bit.'  Next week I'll be back 'home' at Basingstoke, I'm on report writing duty so that was an easy decision to make.  I have plans in place for the next two weeks, but I'm not going to commit them to pixels yet just in case I need to change my plans!

*The naming ceremony and first birthday party was lovely too!  I feel very honoured to have been invited!  I just need to remember to take the birthday present with me to the next parkrun!
Posted by MrsBridgewater at 21:10