Possibly the prettiest parkrun on the planet!

We got up rather early to set out for my parkrun fix today.  Husbando was exhibiting at a book fair in Oxford, and I decided that a trip to Abingdon was in order.  As I needed to drop Husbando and books in Oxford at 7am we ended up leaving the house just before 6am.  Not a civilised time to be up and about on a Saturday morning.  When we left the house the temperature was just above freezing, so I set out in long running tights.  I did pack my trail shoes 'just in case' but didn't think to take shorts!

The last time I was in Abingdon was for the marathon.  I recognised bits of the town, but have to admit that it looked much nicer in the sunshine and when I wasn't contemplating running 26.2 miles!  Thanks to the wonders of Facebook, I'd been given idiot instructions to get to the right car park, and arrived with plenty of time to spare.  The first person I met as I read the instructions on the pay and display machine was my Facebook contact!

I chatted to lots of friendly people, and we all remarked on how beautiful the weather was, how awful the events in Boston of earlier this week were, mutual friends we might know, tomorrow's London marathon and all the normal chit chat that runners talk about!

After the run briefing we observed a minute of silence out of respect for those who lost lives, family members or were injured in the bombing of the Boston marathon last Monday.  The odd Garmin beeped, which is probably quite fitting, but silence was observed by everyone.  I noticed a couple, not taking part in parkrun, who were walking their dog a short distance from where we were standing.  They paused and observed the silence too.

And then we were off!  The course is pancake flat, but has quite a lot of sharp and/or narrow turns.  Running along the bank of the Thames in the sunshine was glorious.  As we thundered past a narrowboat I heard someone say 'there's millions of them!' Possibly not quite what they were expecting to see when they moored their boat on a quiet river bank the night before!  A large proportion of the course is on grass.  The going was firm, but quite uneven under foot.  I thought I'd just take it easy and see how I got on.  I am still nervous running on uneven ground, and my ankle still isn't really strong enough for me to really 'go for it' on such ground.

We ran two laps of what is possibly the prettiest parkrun ever.  I say 'possibly' because I spent a lot of time looking down at my feet rather than at the scenery!  I really enjoyed my run, despite developing running tourettes as I tried to negotiate some twisty bits of the course and came into intimate contact with a hawthorn bush as I rounded a corner!  I chatted with lots of runners and was surprised with my finish time - 23.46 - and the fact that I finished 40th overall!  (5th lady, and 1st in my age category - woo hoo!)  For anyone who is interested you can see the Garmin thingy here!  I felt as though my third mile was much slower than the first two, and was quite happy with that as I have a long run planned tomorrow, but it seems it wasn't slower at all.  I even managed to overtake a few people as we approached the finish funnel. 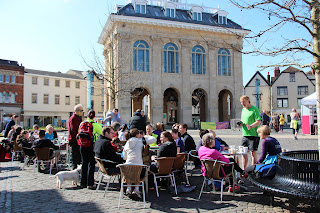 After scanning barcodes and getting my breath back I joined a steady trickle of runners making their way across the bridge to the market square.  Lots of Abingdon parkrunners enjoy their post run coffee at Java & Co!  A huge group congregated in the sunshine near the lovely Town Hall.  My interesting, non running related, fact of day is that on Royal occasions buns are thrown off the top of the Town Hall.  This last happened to celebrate the Jubilee last year.   It was lovely to sit drinking coffee and chatting in the sunshine, I think runners like talking about running almost as much as they like running!

I am so glad that I got up early, and am glad I added Abingdon to my parkrun tour.  Next week I'm off to the inaugural Winchester parkrun.  The boys are coming with me - they have missed their parkrun fix as they were away last week, and it wasn't practical for them to come with me today.