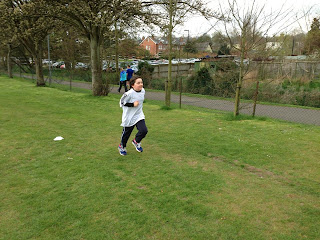 A new parkrun in the area, or even not quite in the area, is always a good excuse to catch up with old friends and make new ones.  So when the long awaited Winchester parkrun announced that it was starting today I checked my diary (although what else I could possibly be doing on a Saturday morning I can't think) and made plans accordingly.   It was, in fact, open morning at my younger children's school but, as two of the children were happy to go along on their own, I decided that my presence was not required.

I roped in two friends, who blame me for their parkrun addiction, and we set off with my youngest boy.      After arriving and parking in the leisure centre car park we were soon catching up with runners we knew from other parkruns.  Basingstoke parkrun seemed to have dispatched a huge contingent of runners, many resplendent in Chineham Park Running Club shirts,  Frimley Lodge, Alice Holt, Newbury, Poole and Andover parkrun were also well represented.  There were probably many other parkruns represented, and some famous parkrun faces I didn't spot.

The route is flatter than a flat thing that has been throughly ironed, but it has over 40 corners!  Some of them are very tight, including a U-turn that could become 'interesting' in muddy weather.  As there are three laps this needs negotiating 3 times.  There are also 6 river crossings, willow trees, ducks and an awful lot of grass.  There is a weeny bit of tarmac, but the rest is grass playing fields all the way.  This had the effect of taking my back to my school days when we were made to run around the school fields.  There was a river crossing involved in that run too - we called it 'The Jordan' - and I hated running round those bloody fields!

I had intended to run with my boy, but a friend with a pushchair promised to keep an eye on him.  I was wearing layers as the weather was chilly and I had intended to jog slowly round, but there was no time to change, so after the pre-run briefing I set off.  Soon after the start I stopped to check that a boy who had tripped over was OK, I felt guilty about not running with my own boy - but he doesn't like running the whole 5k with me, and I don't really enjoy running quite as slowly as he does.  With all hope of a cracking time out of the window I carried on at a slightly gentler pace.  The marshals who directed us around the twisty course today were excellent, cheerful and encouraging, taking charge of stray jumpers (my son's) and just making the run much more enjoyable.

I crossed the line in 22mins 18seconds - I knew that something wasn't quite right!  I hadn't run anywhere near hard enough to clock that time, moments later I realised that the distance recorded on my Garmin was 2.9 miles so the course was a 5th of a mile short of the magic 3mile/5k.  What had happened?  It seems that the event director had moved the course markers slightly to accommodate the large field (280 runners) today.  This, amplified over 3 laps, meant that the distance overall was too short.  Some magic formula was applied to the results though and times were adjusted.  While it would be lovely to have recorded a 58 second 5k PB it would not have been a real PB and I'd always have known that!  My actual time went down as 24.13 - much more realistic given the pace I ran at!

After catching my breath, stripping off one of my layers and having a quick chat at the finish, I set off on another lap with the boy.  I quite like this warm down lap with him, I get to chat to other runners and encourage them on (and talk to some of the faster runners who are warming down too), my contrary child always manages to put on an impressive burst of speed as the finish funnel looms closer - despite having whinged about tired legs minutes beforehand!

After scanning of barcodes and retrieval of bags we made our way to the cafe at the sports centre for the most important bit of parkrun - coffee!  It never fails to amaze, or maybe that should be dismay, me that sports centre cafes provide such unhealthy food, and that chocolate vending machines are to be found at every corner.  Surely they should be promoting healthy eating rather than peddling high fat, processed food at every opportunity?  That said, the coffee was good and the company better!  I caught up briefly with old friends who used to run at Basingstoke and a runner I met at Abingdon last week.  I have met so many new friends through parkrun, and now regularly see an old friend (now she has given in to my relentless parkrun evangelism, accepting that the only way to get me to shut up about it was to turn up on a Saturday morning).  Plans were made for future parkrun jaunts.  Where will we go next week?  Who is going to the inaugural Queen Elizabeth parkrun?  Can we cope with the hills there after the flatness of Winchester?  Who knows where we'll end up - better watch this space to find out!

Thank you to all of the team who made today's run possible.  Here's to many more successful Winchester parkruns!