Did they name this park after me? 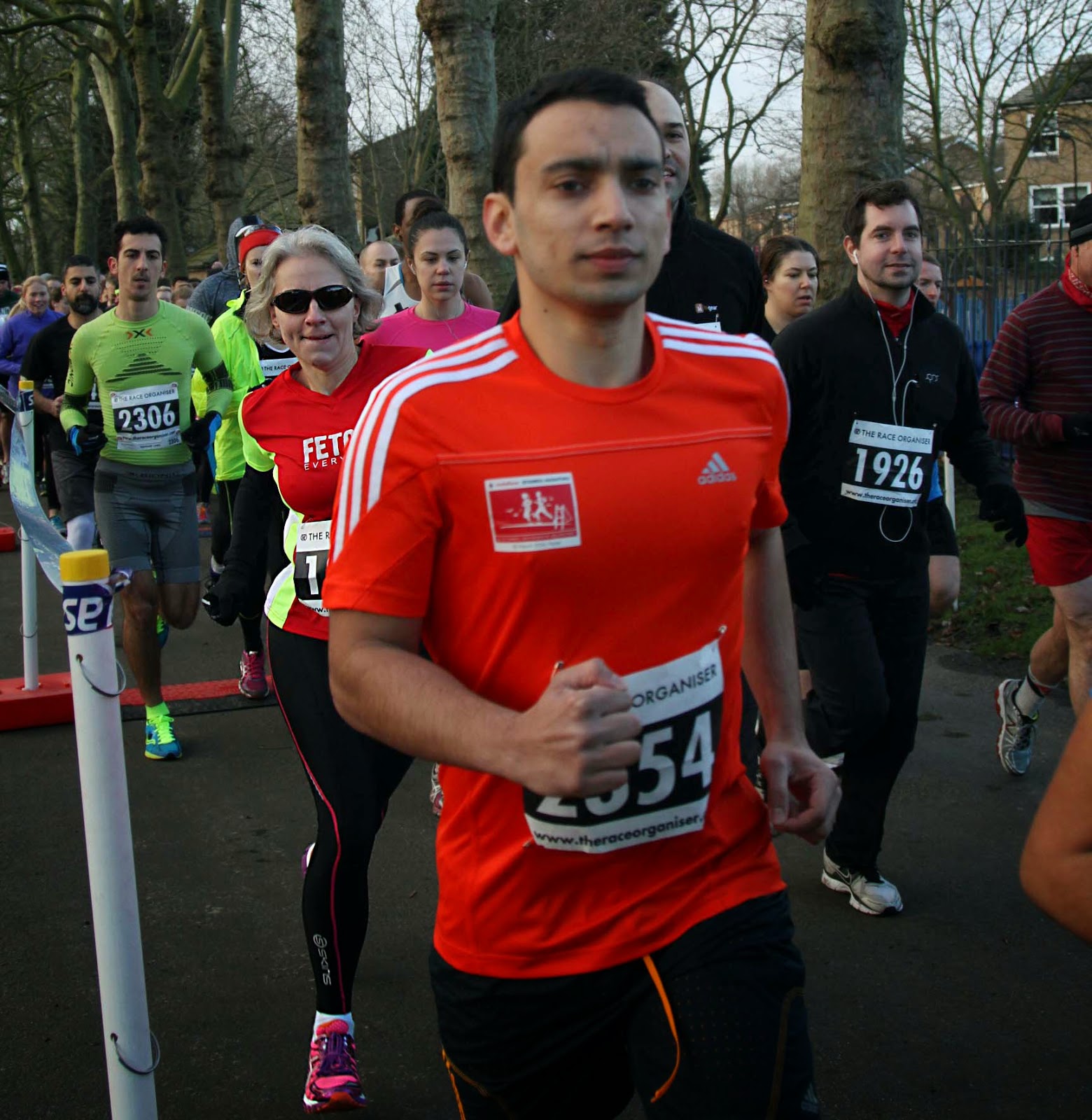 A couple of Sundays ago I happened to be running around Battersea Park at about 7am.  I noticed kilometre markers on some lamp posts and decided that, if there was a race going on I'd pay to join in.  I ran a few more laps around the park looking for a race HQ, but couldn't see one, so surmised that the race had been held on Saturday.  I was wrong, as I later found out when friends posted pictures of gorgeous medals in the shape of Battersea Power Station.  I was gutted.  I made a decision to look for races that were happening in London on the Sundays where I would normally be up in town with Husbando.  The aim being to incorporate the 'race' into my long run for the week.  And to add to my bling collection. 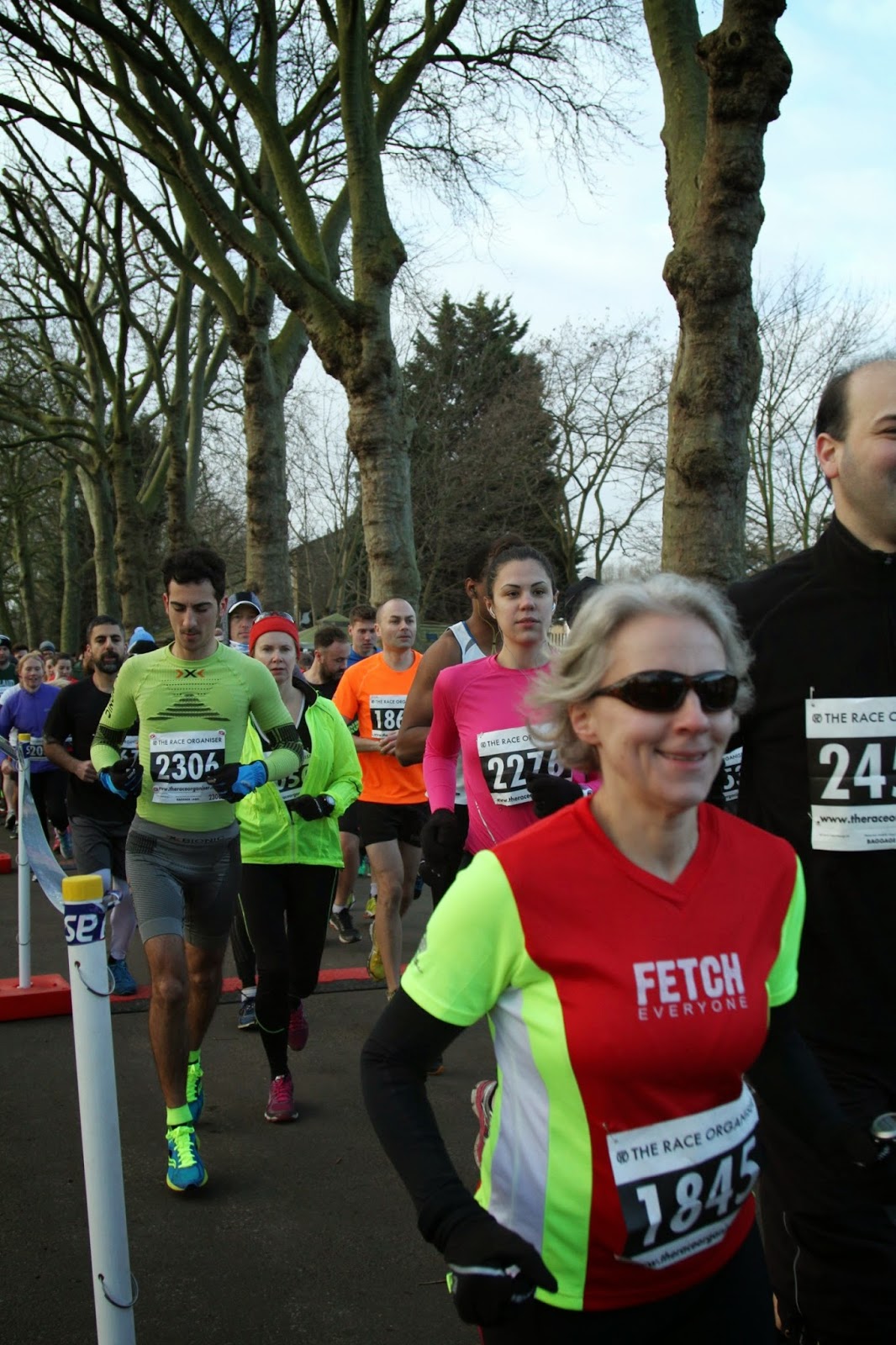 After a very short time spent Googling, I found a 10k in Victoria Park organised by The Race Organiser.   I lived briefly in Bethnal Green and have fond memories of a vegetarian Thai restaurant where far too many bottles of wine were consumed on a regular basis, but I wasn't a runner in those days so knew very little of the area apart from the route from the Underground to our flat (past the Fire Station!) and pubs.  The plan was that I would run 3 and a bit miles to the start, run 10k and then run 3 miles back to meet Husbando for lunch. I hadn't factored in a slightly later start time to our journey, which combined with my need to get everywhere too early meant that I'd be 'cutting it fine' (i.e. arriving as registration started rather than 5 minutes before hand!) if I ran to the start.  Never mind - this meant I could take a bag with me, so that I could have warm clothes to wear while waiting. 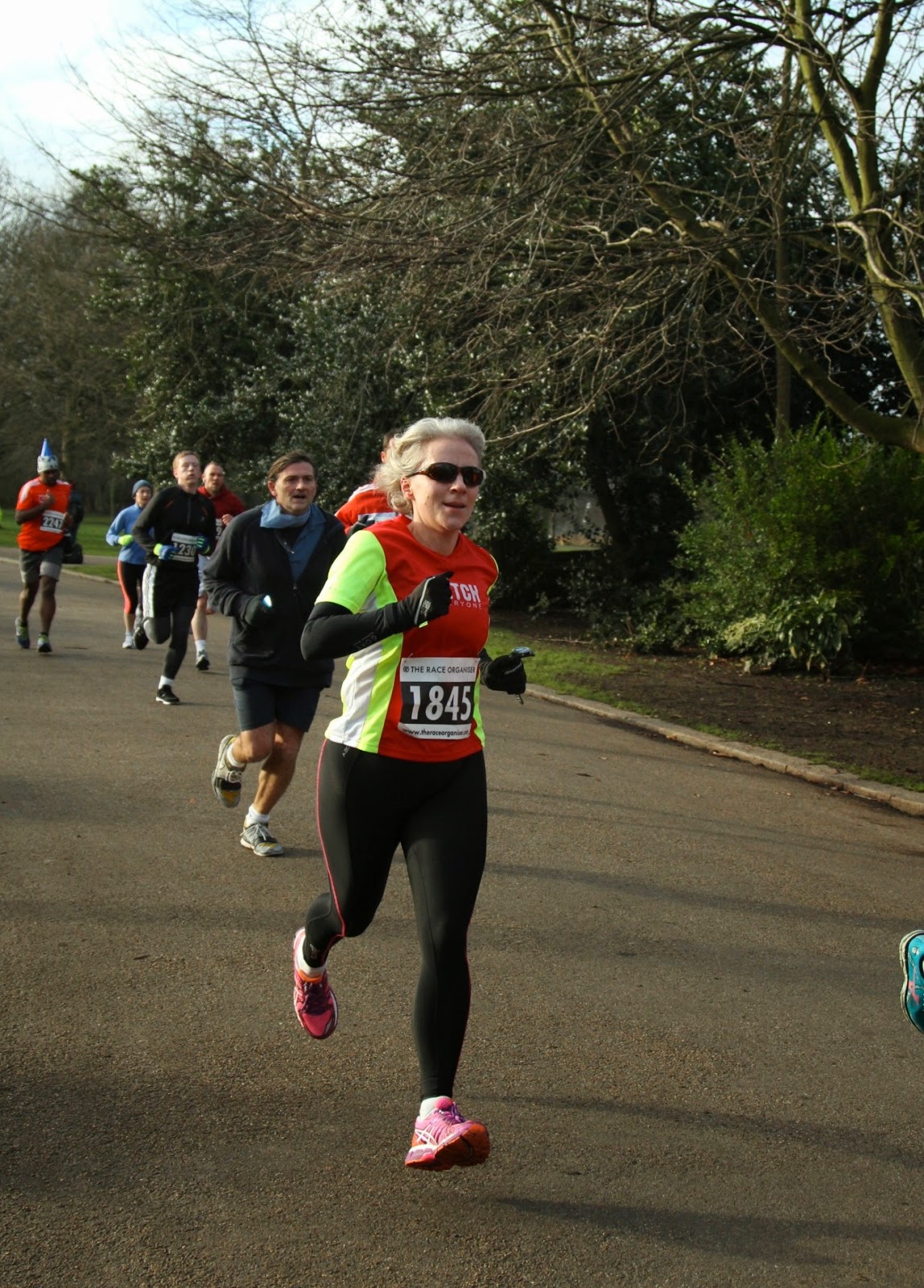 The start area was well organised, but the start itself was a bit delayed as people were still collecting their race numbers at 9.30am - which is why it is important to allow lots of time to get such things sorted out as most people seemed to turn up at about 9.20am.  The race director managed this with good humour - encouraging us to put our iPhones away and talk to people around us!  We were soon underway.  A little congested at the start - as you can see by my face in the photo above as I try to get past other runners!  I had no plan other than to get round, I knew the course was flat so I was hopeful of getting round in about 50 minutes.  I'd run twice yesterday, parkrun plus a speedy 2 miles, so I certainly wasn't approaching this as anything other than a training run.  I ran the first mile in 7.13mins.  Oops!  I decided that 8min/miles was the pace to aim for, but couldn't make my legs go slow enough for that, so threw caution to the wind and just…er…. ran!  I didn't feel as though I was running well, it didn't feel particularly hard work, and I chatted to various other runners as our paths crossed.  I had a lovely chat with a young lass from Exeter University OTC Harriers, we worked out that she was born about 7 years after I left University of London OTC - I thought this might spur her on, but I am pleased to say that it is ULOTC:1 EUOTC nil!  Three laps meant that there was a good chance I would be lapped, and I was, on my second lap the first two runners flew past - moving so quickly that I felt as though I was standing still.  They finished in 31.16 and 32.00 respectively. 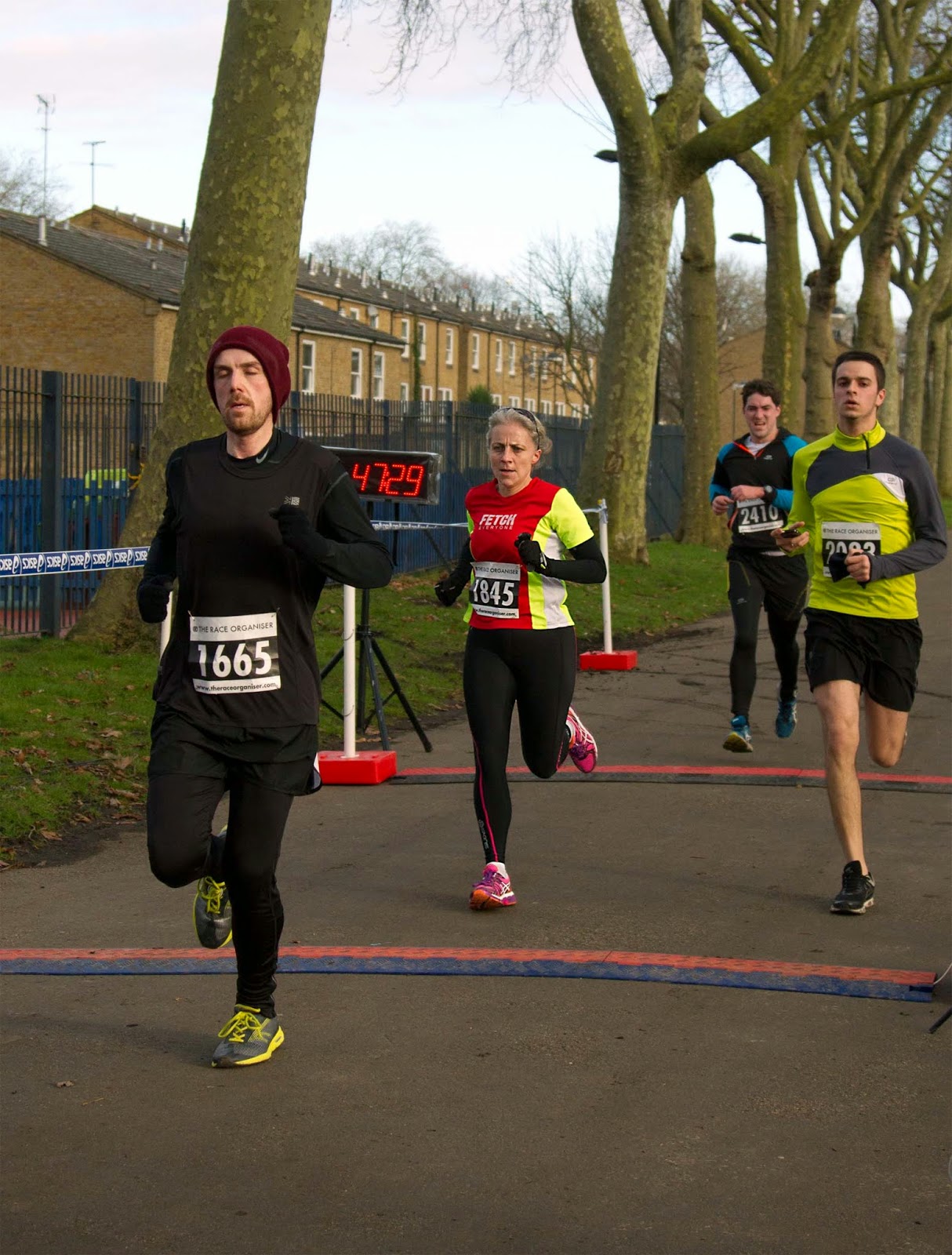 As ever I was doing running maths in my head.  'If I run 8 min/miles for the rest of the race I might get a PB.'  Later this changed to 'Crumbs, I could do 9 min/miles and still get a PB, maybe my maths is out…' Then at the very end I realised I could walk the last couple of hundred meters and still beat my PB.  But I didn't.  The thought did cross my mind - but I knew that I would feel I was cheating in order to make a subsequent PB easier to achieve.  There were three mats at the start and finish - so I started my watch before I crossed the first one and stopped it after I had crossed the last one at the end.  This meant that my chip time was even better!  47.18!  A whole 118 seconds faster than my last PB, making me 24th lady and 4th in my age category (151st overall).  Results were published quickly, and photos were available for viewing and downloading by the time I got home (having run another 6 miles and had lunch etc.) for a very reasonable £3.  The goody bag was descent - water, a juice drink, nature valley bar and some jelly bean type things, plus a medal.  All in al this was a great 10k for a very reasonable price (£13 for UKAA members).

Special thanks must go to the race photographer Basil Thornton who emailed the first picture in this blog to me as a bonus when I ordered some others.  I would never have found it as the number isn't visible and I really like it! 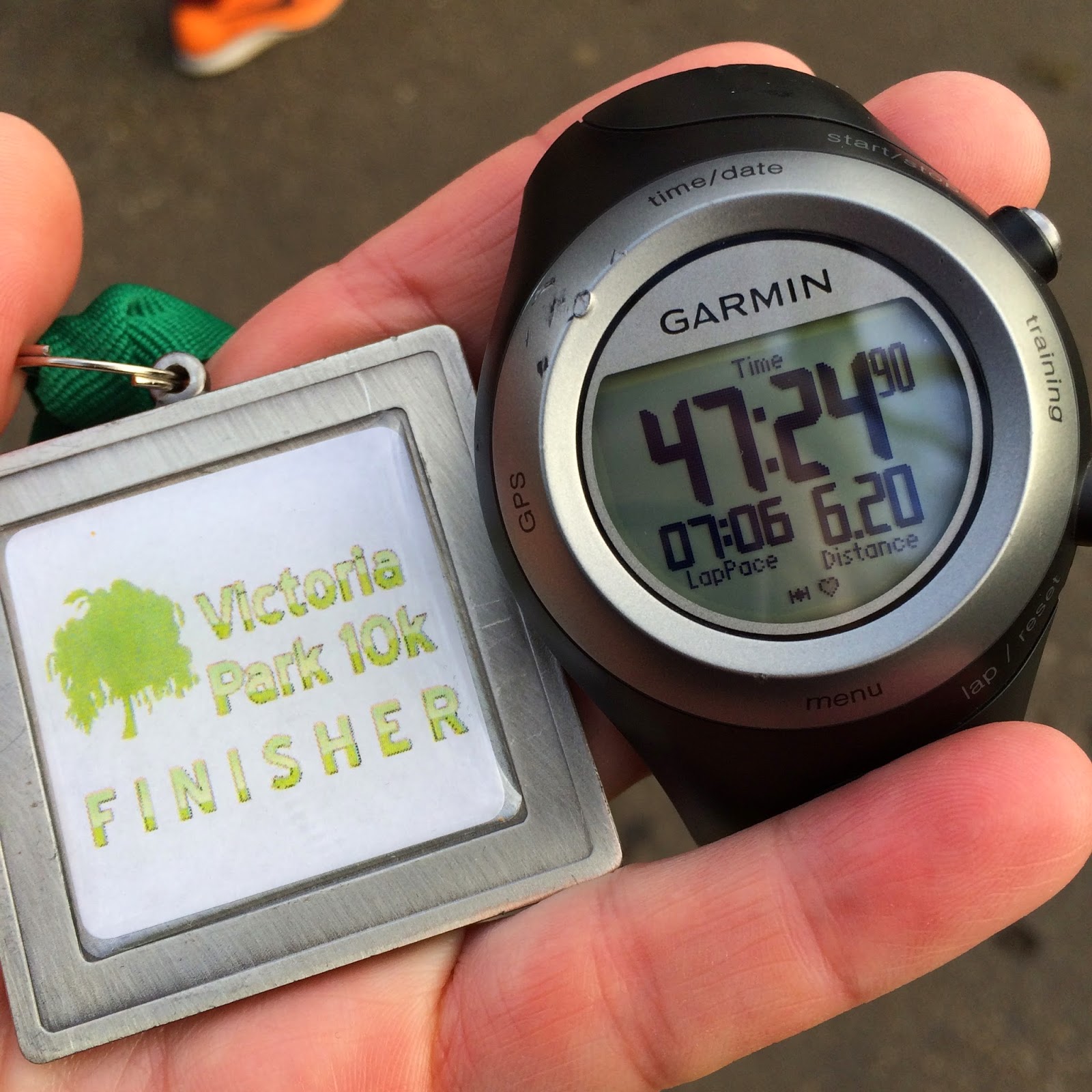