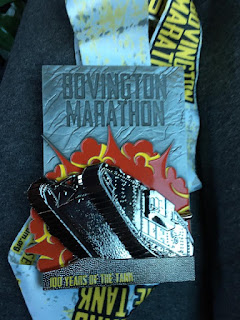 Signing up for a marathon in December seems such a good idea in June or July.  The weather is sunny (ish) and dry (ish) and it seems incomprehensible that you could ever need long running tights and gloves while running.  But I had signed up for yet another marathon.   This latest offering from White Star Running was a bit different, the location was on and around the tank ranges at Bovington with a medal that celebrates the 100th anniversary of the tank.

Last Sunday was freezing cold, and I was beginning to panic about a long, cold marathon, yesterday was mild but it rained all day and I began to worry about over 5 hours of running in the rain.  I was not filled with joy at the thought of leaving the house at 6am to drive down to the Tank Museum at Bovington - I was hugely grateful to be given a lift so all I had to do was relax and enjoy the ride, in the fog.

We arrived in good time, even after a McDonald's stop for coffee and loos, we parked the car within about 20 metres of the start, and went to use the loos in the restaurant of the Tank Museum (which looks awesome and well worth a visit) before returning to the start for the race briefing.   There can't be many race briefings where you are told, 'If you see something that looks like a grenade don't pick it up because there is a good chance it is a grenade!'

And then we were off.  I decided to run with the guys I'd travelled down with.  This running races with another person is quite a novelty for me and I have to say that the miles fairly flew by!  The first few were flat and not too wet - just one river to wade through - or avoid by queuing to go over the rickety bridge.  After that it got a bit bumpy, nothing too steep (although some of the downhills were a little precarious) with all sorts of different surfaces under foot from concrete (not much of this at all) through woodland floors deep in in pine needles and fallen leaves to mud.  Lots of mud.  And puddles.  We christened one area the Lake District as the puddles were so huge and numerous.  We were having lots of fun.  The aid stations were well positioned but, with the notable exception of the Lovestation (more on that later) I didn't think they were quite up to the usual White Star Running standard.  At about 16 miles (I think) we ran down a hill, each of us commenting that we were feeling a bit peckish.  Our spirits listed when we saw an aid station... and mine fell again when I realised that the only food had nuts in.    This was when I regretted my decision not to carry any snacks with me.

At some point someone had moved one of the signs, which resulted in us taking a little detour.  This meant that we got to meet a load of the half marathon runners who told us we were on the wrong track so we retraced our steps and found the correct route. We ran past Monkey World - and saw monkeys playing on their climbing frame.  They weren't impressed with us disturbing their peaceful morning and shouted us.  We responded by a rousing chorus of 'King of the swingers!'

At 20 miles crossed a road and I heard my name being called out and looked up to see a friend with his camera!  He also had Haribos - what a legend!  20 miles in a WSR event means that you are at the Lovestation - plenty of food, drink and banter, I was famished - I stuffed my face and grabbed a handful of pretzels to take with me and we set off for the last 6 and a bit miles.

Quite a bit of this last section was the same as the bit of the first few miles, but in reverse.  It took in the deep river we'd crossed.  I decided that, as my feet were still fairly dry, I'd take the rickety bridge. It was considerably more rickety and my 2 running partners opted to run through the middle of the water.  They told me that it was 'refreshing' and 'just what they needed' to wash the mud out of their shoes.  I was not convinced.  And I soon discovered that they were fibbing!  We had 4 (or was it 5 or 6) more river crossings - and these did not have bridges.  The water was really cold and deep! Our conservative pace meant that we were still trotting along really happily, overtaking lots of people who were beginning to flag, and we still felt strong.  Based on prior knowledge of the 'ish' nature of the length of a WSR marathon we got to 25 miles and were debating how much further we might have to run.  We saw the '400m to go' sign (which has a history of being fairly randomly placed in the last mile of a race) and still did not really think that we could be near the end, as that would make it a marathon length marathon!  But, along the path we went, crossed a road and there was the Tank Museum and the finish flags.  It really was the finish line!

We crossed the line together - passing two lovely tanks, to be presented with our fabulous medals and goodie bags (great new buff and a bottle of beer) and to have celebratory photos taken!    An utterly fabulous day out - fun and smiles all the way!

Thank you guys for the company (and the lift). https://www.justgiving.com/fundraising/MrsBridgewater1