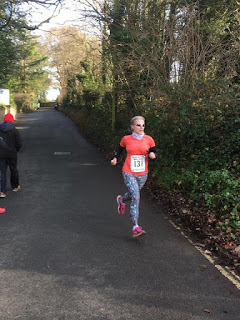 A few days ago a friend posted on Facebook about a race being run by Portsmouth Joggers' Club.  It was cheap to enter and in aid of a good cause - the Rocky Appeal, so I shouted upstairs to Husbando and asked if he fancied a 7.5 mile road run.  He shouted down to ask when, I shouted back to say 27th at 11am, he shouted down to say where, I repied Horndean, he shouted back again where!  At this point one of the children told us to embrace the 21st century and just text each other like normal people as we were disturbing their TV watching/PS 4 marathon.....

That's how we ended up in Horndean on a frosty December morning.  We were very glad to find that the race HQ was in a toasty warm village hall and not in a draughty tent. we grabbed a cup of tea and some biscuits and bought some raffle tickets while we waited, avoiding going out in the cold for as long as possible.  But out into the cold we had to go, at least by 11am it had warmed up a little.  It was a beautifully sunny and clear day, which meant that there was nothing to obscure the view of the hill that marked the start of the race.

I'd been told, by someone who had not run the race, that it was uphill all the way out and downhill all the way back.   This was somewhat reassuring as we slogged up the hill that made up the first mile of the race away from The Ship and Bell.  Husbando and I had thought that we might run together, but my right quad was so tight that I knew I would not be having the best of runs, I didn't want to slow him down so about half a mile in I told him to go on and watched him vanish up the hill.  The outward leg was predominantly uphill, but not entirely, and there is no fun in running down hill when you know that very soon you are going to have to run back up it!

Before the start of the downhill section I fell into pace with a bloke and we ran together for quiet a way, just before the 3 mile point we saw the first of the fast runners coming back, so we shouted encouragement and greeted people we knew by name.  Husbando came along and looked to be running well.  I told him to make sure he had a cup of tea waiting when I finished.   The turn around point was at the second pub, The Red Lion in Chalton.  The pub missed a trick by being closed when we arrived, I would have stopped for a quick G&T, so we had to make do with a quick chat with the ladies on the water station, and a cup of water before heading off for the return leg.

The weather was lovely, the views were pretty, but the hills were a wee bit brutal.  I told the man I was running with (I think his name was Andy) that when we got to the steep hill I was going to run/walk it.  I knew the hill was about half a mile long, and that while I could run it, it wouldn't be pretty and I would take ages to recover.  So I ran 50 paces and walked 40 all the way to the top.  When I got to the 'top' it carried on going up - I hadn't noticed that this section was downhill on the way out!  Thank heavens for the encouraging marshals - there were plenty of them to encourage us along and make sure we didn't go the wrong way.

The last mile was, obviously, downhill.  And I managed to pull of a fairly good impression of someone who is able to run as I approached the finish.  Husbando was waiting with his camera, having finished hours earlier.  No bling for this race, but a couple of freebies - chewy vitamin pills and a coffee drink. 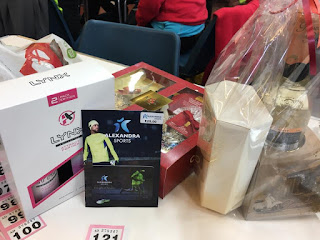 After getting my breath back we took a seat in the village hall to wait for the raffle to be drawn.  Husbando got me a cup of tea (he is well trained) and we chatted with other runners.  We made out like bandits in the raffle.  We handed back 3 prizes but still had quite a haul to carry home with us!

Thank you to Portsmouth Joggers for putting on this fun race for the 32nd time!  Hope that you raised loads of money.