So that is how I came to be sitting on a bus, with a red wine and curry hangover, en route from a park and ride to Butler's Land Farm near Reading to take part in The Gutbuster.   In my defence I hadn't planned to have a hangover.  I didn't think I'd had that much to drink, I certainly wasn't steaming drunk, or even properly tipsy, so the hangover was both unexpected and unwelcome.  A bit of a headache is no reason not to run, especially when you have paid about £30 for the 'pleasure!' 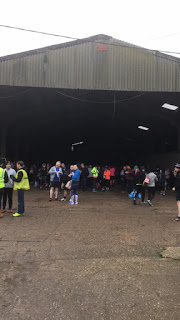 There is no parking at the start of the race, hence the coach journey to the farm, where the race HQ was located in a farm shed.  Numbers were collected, timing chips attached to shoes, removal of outer layers of clothing was contemplated and delayed for as long as possible, port-a-loos were visited, all accompanied by the smell of bacon being fried.  I quite fancied the idea of a bacon sandwich - but decided that waiting to the end of the race would be a good idea as my stomach was somewhat delicate!
After the run briefing, during which I wondered why I had thought the 10 mile option was better than the 10k option we were off.  The first section was very muddy - I dread to think what it was like by the time the 10k race got to start - and we bimbled along as a group of about 8 or 9 of us.  But we soon got separated.  I was running with Husbando, all was Ok initially - we clocked a 7.40min/mile for the second mile - and then my right quad started to hurt.  It had given me a bit of trouble earlier in the week, so I decided to take it easy and let Husbando go on.  There was no point in pushing myself too hard. 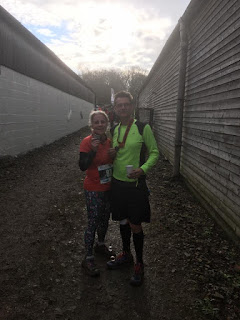 The route was mainly on trail, the famed ford had run dry meaning that we didn't have soaking wet feet too early in the race, but the mud was claggy.  It stuck to everything, at times it felt like running on an ice rink with heavy weights (mud) attached to my feet.  It was demoralising - it felt like I was putting in an awful lot of effort for very little return.  The course was well marshalled, signposted and followed an interesting slightly undulating route, with supporters dotted along the route cheering us on.   I wasn't feeling the love though, my head hurt and I was on my own.  Yes, I was chatting a bit with people as I passed them or they passed me, but I knew that there was a big group of my friends behind me who were no doubt having a ball and encouraging each other and that Husbando was too far ahead for me to catch.  I thought about stopping to wait for the others, but didn't know how long I'd have to wait and didn't want to get too cold, so I plodded on.
The first 5 miles seemed really long, I was beginning to lose the will to live and thought about calling it quits, but didn't, miles 5 to 8 went by a bit faster (in my mind if not in reality) but the last 2 miles were incredibly tough.  Zig-zagging through muddy fields, being able to hear the finish and not see it, then see the finish but know that there was a fair bit of zigging and zagging still to do.  My watch beeped to tell me I had run 10 miles, but I still wasn't at the finish - I estimated about 400m still to do, and not a lot of time if I wanted to get home in under 1hr 40mins.  I put on a burst of 'speed' turned a corner through a gate and ran up a muddy, slippery, hill (overtaking a few people on the way) to throw myself over the finish line in 1hr 39minutes.  I think it is possibly the toughest race finish I have ever encountered.

Husbando was waiting by the finish - he only beat me by about 8 minutes, and whisked me away to pick up bags and get the bus back to our car before I could remember that we'd been promised mince pies and mulled wine at the finish!

So, that's 2016 done.  10 marathons completed, not bad for someone who was going to quite running marathons at the end of 2015, and 1800 miles run in total, not many PBs, but lots of fun.  Looking forward to more of the same next year. 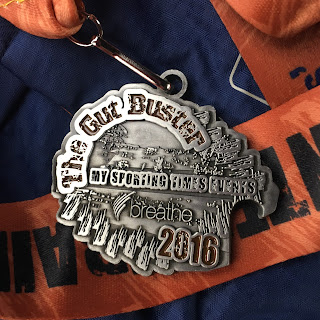