A Day At The Movies 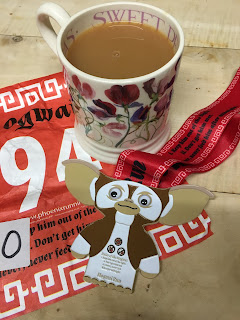 The 'A Day At The Movies' race is a bit different.  It is organised by Phoenix Running as a charity run, raising money for Rays Of Sunshine.  Over the course of a year not everyone who enters a race actually shows up to the start line and this, along with a few more medals than absolutely necessary being ordered, means that there are left overs.... so Phoenix came up with the idea that a race could be put on where we could choose our own medal from the surplus supplies and the profit (more than normal because no medals or race numbers would need to be produced) would go to charity.  I signed up.  I mean, why wouldn't I?  On the entry form we had to choose our first three choices from a list of available medals.  I entered my choices, then did the same for Husbando and promptly forgot what I had chosen.  'A Day At The Movies' is a multilap event where you can complete as many 3.28 mile laps as you want within the 6 hour time limit.  Given the fact that it was less than a week since my last marathon I was pretty sure I would be running a half marathon at most.

Saturday started well.  I didn't read the race instructions and assumed that the race started at 9am (as the Remembrance Day Marathon had last Sunday) and Husbando relied on me for timings, so we left quite early!  He'd also told a friend when we were leaving, so she left her house at a similar time.  We met up at a Starbucks en route, where I was becoming quite stressed about the time we were wasting, until someone checked and we had a whole extra thirty minutes to spare!  Plenty of time for coffee, visits to the loo and Christmas tree decoration shopping! 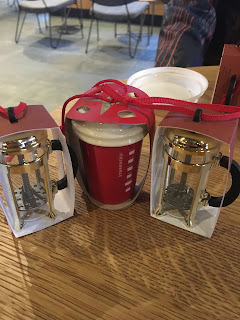 We were still early when we arrived at the Xcel Centre in Walton On Thames, but not excessively so. We collected our numbers - all three of us had numbers from different races, which was exciting as none of us could really remember what we had chosen! We had another cup of coffee, another trip to the loo, caught up with some friends and chatted to a lady about the Disneyland Paris half marathon.    The run briefing was short and sweet, the weather was fantastic - bright autumn sunshine and, once I had put my bag in the gazebo - with my bananas easily accessible, we were raring to go!  We set off in the opposite direction to last week and the laps were half the distance, so four laps for a half marathon and eight for a full marathon.  Each lap would require crossing the dreaded blue bridge before going under Walton bridge and then enduring the longest every 400m to the turnaround point, and then having to go over that blue bridge again on the way back!   To be fair, the bridge isn't that bad, but it is the only incline on the whole route.  On the first few laps it took me 21 strides to get to the top of the bridge, one the last lap it took 24!

Laps sound boring, and I know lots of people don't like them, or don't like the idea of them but there is a lot to see on this route.  There are boat houses, a pub, bridges, coffee shops, people rowing, cyclists, dog walkers, children on scooters, swans, geese and ducks - plenty to see!  There was also the temporary addition of Stella Point - not a peak on the way to the summit of Kilimanjaro, but a 3/4 full bottle of Stella that stood at the edge of the path for my first four laps before someone picked it up and put it in the bin... at least I hope they put it in the bin and didn't decide to drink it! 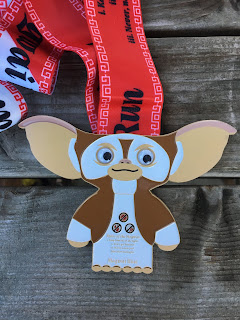 I started too fast.  I haven't run a single step since the marathon last Sunday and my legs, while not 'fresh', were eager to run.  It didn't matter, at some point I'd decided that I would do that full marathon distance.  I am not in the habit of running marathons so close together (although a lot of my running friends think nothing of running 10 marathons in 10 days and more!) so I decided that if could run this one in about 4hrs 30mins I would be happy.  Knackered, but happy!  About 10 miles in I realised that my pace was still too fast and that I had completed the first 10 miles faster than I did last weekend.  I made a conscious effort to slow down.  I spoke briefly to Husbando at the end of my 4th lap - he had collected his 'Leon' medal at the end of a half marathon distance - grabbed a banana and carried on running.  It is quite hard to resist the vast array of sweet and savoury treats available at the aid station, but resist I did! 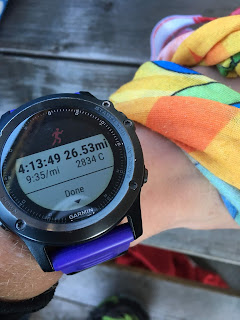 As I carried on running I became aware that there were very few women ahead of me.  Just one or two I thought.  There was another lady about a quarter of a mile behind me (based on my marathon maths calculations this could be very wrong - I just estimated guessed on how far away from the turn around point I was when she was coming in the other direction) and I determined to keep her behind me, this might sound uncharitable - but I needed something to keep me motivated when any sane person would sit down and have a nice cup of tea!  This was turning out to be my best marathon in quite a long time.  I realised I could possibly run faster than I did last weekend... and I didn't take any walk breaks until the very last lap. 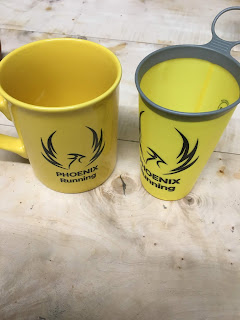 As I crossed the finish line, 6 minutes faster than last week, I handed over my wrist bands (one for each lap) and declared that I was 'done' Rik informed me that I was the first female finisher for the marathon distance.... all the fast ladies had stayed at home today.  I am very glad they did - it is probably the only time it will ever happen!  In addition to my Mogwai medal (with googly eyes) every runner also received a collapsible cup for use during races and a ceramic Phoenix mug - so that we can think about running and entering more races while on a coffee break at work!  Thank you Rik!  The collapsible cups are part on an ongoing desire to reduce Phoenix's carbon footprint, any paper cups used by Phoenix are fully compostable and runners are encouraged to use the same cup throughout the race (numbered trays help here).

It was lovely to see so many familiar faces, and wonderful to run on such a crisp, clear day.  A huge thank you to all the volunteers.  You were cheerful, friendly and supportive - you guys (and Rik) make these events really special.  Thank you!