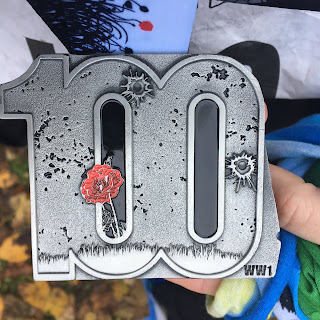 I have a mountain of marking to do, 129 reports that need writing and I suppose I should be planning lessons for the coming week, but I cannot do any of these things until I write about today’s very special marathon.

I signed up ages ago, and decided I would, for a change, train properly for this one.  A broken toe and a 50 mile race put paid to any thought of a sensible training plan, in my normal style I would just have to wing it!   Whatever happened I was not going to miss this marathon.

Not only does today mark the 100th anniversary of the end of ‘the war to end all wars’ it was also Phoenix Running’s 100th marathon.  This was obviously too awesome a coincidence to be allowed to pass without Rik organising something pretty amazing.  We knew he had planned a hard stop for 2 minutes at 11am, we knew that we would get a special commemorative medal for Phoenix’s 100th marathon, but Rik was uncharacteristically reticent when it came to revealing the race medal. 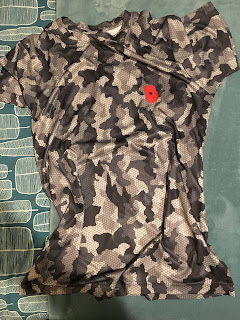 Saturday saw torrential rain virtually all day and through most of the night.  Rain was forecast for most of Sunday too.  I dragged out my only pair of plain black running tights so that I wouldn’t be wearing too many clashing patterns, packed my race bag full of spare clothes and rain jackets, completed my pre race ablutions and set off for Walton On Thames.  IT was still raining - and there was so much surface water on the roads I had to take it quite easy, but I arrived in good time.  There were far more runners than normal - Rik had organised 420 race places - meaning that the total distance covered by the runners would be as close to 11,000 miles as possible.  I'm not good with crowds so tried to find a friendly face - and luckily I did. The weather fairies were being kind and, by the time we assembled outside for the race brief, the Sun was shining.

Rik's race briefing was poignant as he explained why this race was so important to him - I apologise for having to use my teacher voice to ask people to be quiet!  Off we went to the start - no huge dash to cross the line as the race was chip timed.

I wasn't sure what my race strategy would be.  All I knew was that I'd quite like to get a course PB.  I wasn't confident though as my right knee has been a bit (that's an understatement) painful since the Leviathan 50 back at the beginning of October.  As we all set off though everything felt OK, so I just ran at a pace that felt comfortable.  A fair bit of puddle jumping was involved - this was not always successful and my feet were soaked before the end of the first lap.  We were running 6ish mile out and back laps between Walton On Thames and Hampton Court Bridge.   The foot path is lovely in dry weather, but prone to mud in the rain... and there was lots of mud - but that seems only fitting for a marathon marking the anniversary of the end of the war! 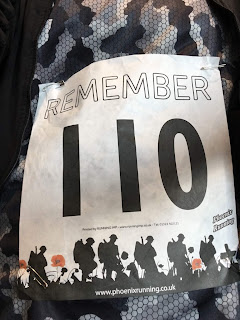 The running was going well, despite the increasingly slippery mud.  I ran the first 10 miles in just under an hour and a half.  The weather was great, as 11am approached we could hear church bells ringing up and down the river, we could watch swans swimming, rowers rowing and chat with other runners as we ran up and down the foot path.  At 11am the marshals, who were positioned at 500m intervals along the route, sounded their air horns and all the runners stopped.  I was at the apex of a bend so couldn't see any other runners or members of public, but other runners report that cyclists dismounted, parents hushed their children and everyone joined in.  It was quite a surreal experience and I have to admit that I shed a tear.  It was so quiet that I am convinced I could hear the RHA firing their salute in Central London.  The only human generated noise was the ever present hum of traffic.  At the end of the two minutes, three short blasts on the air horn signalled the restart of the race - it wasn't easy to get moving again. I'd stopped my Garmin and miraculously remembered to restart it again!

I'd left bananas at the aid station, so that I wouldn't be tempted by the wonderful selection of sweets and savoury snacks.  I haven't eaten a Haribo since July and am happy to keep it that way!  I took the time it took me to eat a banana as a walk break at the start of laps 2, 3 and 4.  Rik has moved over to compostable cups at all his race, but I carried my own water bottle, just getting it refilled at the aid station.  The volunteers there were amazing - so cheerful and encouraging.   Huge thanks to you all. 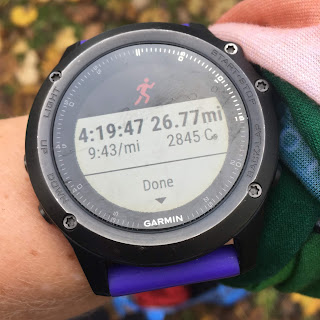 I was slowing down a little, but still making good progress until suddenly my right knee and my right foot both decided to kick up a fuss.  I walked a little but realised, that with 9 miles to go, if I walked it was going to take an awful long time to finish the race.  I considered pulling out altogether - then decided against it - the soldiers in WW1 had much more than a sightly sore leg and a bit of mud to put up with.  I found that if I didn't put my foot flat on the floor it didn't hurt too much - I shall probably pay for that with a very tight Achilles tomorrow.   My pace dropped off a bit, but I realised I could probably complete the marathon at an average of 10 min/mile pace.

I had to throw a couple of walk breaks in during the last lap, but as I approached the finish I managed to pick up the pace to snag a time of just under 4hrs 20mins.  I also managed to avoid the rain!  It was just starting as I crossed the finish line.  I was covered in mud but smiling like mad as I was presented with two medals.  One HUMUNGOUS, fantastically detailed one that I could very easily use as a paper work, the other small but perfectly formed serving as a memento of Phonenix's 100th marathon.  I grabbed some water, a handful of pretzels and was starting to collect my stuff when I was told that I had something to collect from 'the art tent!'  Lisa Smith had been at Carry on up the towpath (where Husbando face planted) to make sketches and take photos of runners - she painted the picture of me below and Husbando had bought it for me!

Thank you Rik and team for a great day.  I really hope it lived up to all your hopes and dreams - I loved it!

PS - lots of photos of the medals below!

PPS - strangely the pile of marking and the report writing still needs doing! 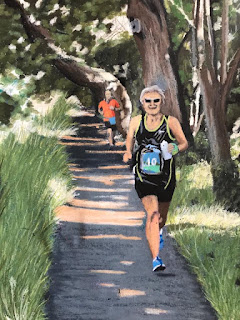 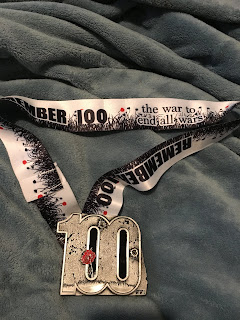 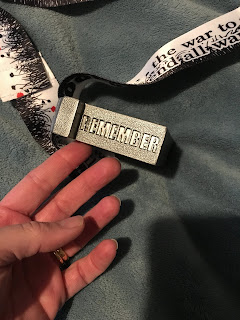 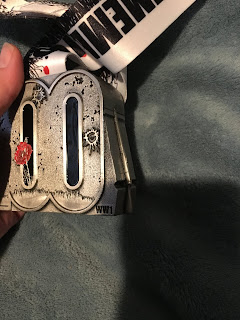 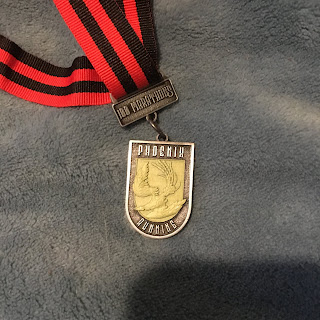 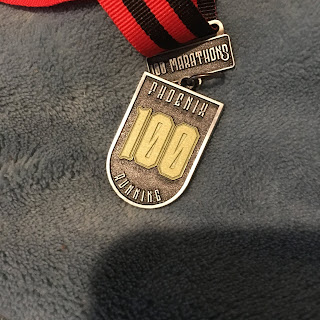