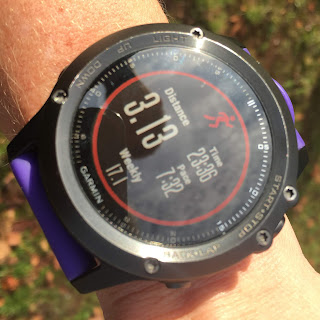 Some of you may remember the I ran a stupidly long distance off the back of not enough training at the beginning of October.  I survived that, but have suffered from it somewhat since.  My right knee has been a wee bit dodgy, resulting in a few aborted long runs and whole weeks where I haven't even put my trainers on during the week. It has made me a wee bit grumpy, particularly when combined with the fact that it is getting dark so early now!

I've been pitching up at parkrun, I even managed to bag three course PBs in a row, and last Sunday I managed to run 13 miles - although I did suffer for that for the next few days.  I have a marathon next weekend, so hopefully I will be able to get myself from start to finish in one piece...

Anyway, back to today.  Last night saw me make a mad post work dash up to London to see Husbando, number one son and number one son's significant other.  Husbando was exhibiting at the Chelsea book fair and as he would need to be there on Saturday too we were staying over.  We'd planned a trip to Fulham Palace parkrun.  I'd been there before (twice in fact) but I had an ulterior motive for not wanting to add to my tourist tally this weekend.  As of Friday I had run at 68 different parkruns, many of you know that I think 69 is the best number on the planet and I wanted to run my 69th parkrun as an 'arbitrary number celebration' complete with cake, fizz, friends and (I hoped) a smutty sounding parkrun.

On Saturday morning - while dealing with water pouring in from the hotel room above us - I found out that Fulham Palace was cancelled.  We looked at the options and linked them to our transport choices and decided to jump on the train from Kensington Olympia to Clapham Junction, from there it was less than a mile to jog to the start of the relatively new Clapham Common parkrun.   The start was easy to spot - myriad lycra clad people milling around and chatting - including some familiar faces from Basingstoke parkrun and others I have met while at various other events.

Clapham Common may be a newish parkrun but it has very quickly developed a strong following - there were so many people!  The weather was perfect and we lined up at the start.  It is a fairly narrow start and, to aid an orderly start, there were volunteers holding up finish times - so that we could position ourselves with similarly speedy runners.  Knowing that my preferred running style is to go off as fast as I can and see how long I can last, I started near the 22 minute sign.  Even with this organisation it took a while to cross the line.  The course is a two lapper around the Common, it is mainly on footpaths,  there are some areas where there are tree roots to avoid.  I can imagine it will become quite muddy in places in the winter.

Husbando and I had got separated between the run brief and the start (I think he went to find the loos) so he started some way behind me.  That didn't last long though - I soon heard him and we chatted for a while before he ran on ahead of me.  I was aiming for around 25 minutes, I really didn't want to push it too hard on my dodgy knee and, if I'm totally honest, I'd had a few alcoholic beverages the night before and was feeling a little below par!  But running felt good this morning, the Common is almost as flat as a pancake and the weather was perfect.   At the end of the first mile I thought 'Hmm, that was a bit fast... Oh well, let's just see if I can keep going.' And I did.  Although I did stop, along with other runners to allow a lorry to cross the path.  The second lap was easier because it was less crowded at the narrow points, and the approach to the finish funnel was slightly downhill - so good for a fast finish, although I did have to stop a couple of paces short of the finish as the funnel was absolutely rammed full of runners!

213 people finished ahead of me, amazingly I was first in my age category which supports my impression that Clapham Common parkrunners are on the young side.  At my 69th different parkrun I ran 5k in 23mins 39seconds and achieved an age grading of 69%.  This is my 4th fastest parkrun ever, and my fastest time for years.  It is a real boost  to run well for a change - running around home can be very demoralising as there are so many hills! 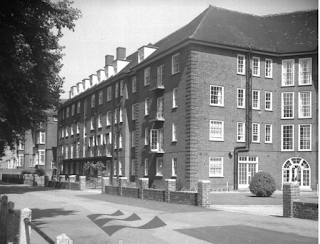 We didn't have time to go for coffee afterwards - as we had to get back to the hotel to try to sort out our soggy room, which was a shame but I suppose that it will give me an excuse to return in the future.  It is an area of London I know very little about.  I lived, briefly, just down the road in Tooting Bec, but Clapham was just a couple of stops on the Northern Line that I passed by without thinking.  Husbando has more of a connection with the area - he was a resident at Halliday Hall (or was that Holiday Hall?) for two years in the 1980s.  Halliday Hall was a hall of residence for King's College London located on Clapham Common South Side, but has since been sold, pulled down and redeveloped.  I managed to find a photo - but not many more details.    Husbando declares that, in his day, the Common was a no go area after dark, something that former MP Ron Davis might have done well to take into consideration!  These days the common boasts 3 ponds and a band stand - I saw the band stand as we ran past it twice, but failed to spot the ponds!

Thank you to all the volunteers for their enthusiastic support, I loved my unexpected visit to Clapham Common - dead easy to get to, fast, flat and friendly!  Thank you!