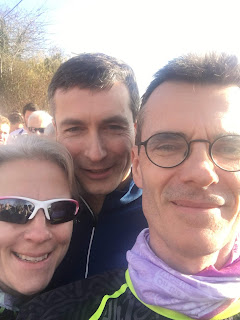 I don't recall ever making a conscious decision to enter this race this year.  I had suggested the 20 mile race to a friend as a good training race for him in preparation for his first marathon, but hadn't really considered running it myself.  Then Husbando said that he thought he might benefit from running it too and suddenly it seemed daft not to take part too.  Being a local race it is quite shocking to realise that I haven't run it for a couple of years.  Especially when you factor in the very excellent hospitality offered by friends who happen to live right next to the start line.  Not only do we get a bit of a gossip, a cup of tea and proper loos we also get to park less than a mile and a half from the start.

The weather was wonderful, sunny, warm with just a light wind.  We took off some extra layers and, at the allotted time - a civilised 10.30am start so not only a local race but a lie in too - we made our way to the start, bumping into lots of friends on the way.  We had a plan.  I almost always have a plan.  I very rarely stick to a plan.  Our plan was to run at 9min/mile pace and to see if we could run the whole thing together.  It would be R's longest run ever, having never run more than 14 miles before and I was still feeling the effects of my marathon the previous weekend.  None of us had anything to prove.  A slightly downhill start made for a faster than anticipated start, but our thinking was that we would 'bank' the time for the hills.  We ran and chatted, I stopped to hug a friend I haven't seen in a long time, ran for a couple of miles with another friend.  The route seemed to feature an awful lot of downhill.  I was beginning to worry about the huge hills I could remember at miles 6 and 8.  When they came they seemed to have shrunk - hopefully this is a reflection on my training and the fact that I live on the side of a hill now.  We came through the 10 mile mark in a 10mile PB time - simultaneously thrilled and wishing that I didn't have to run another lap.  But another lap was what I had signed up for, so off we went. 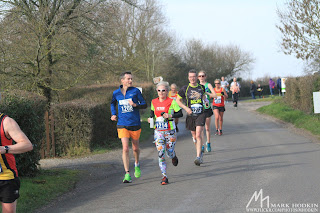 We passed the bus stop where, in a previous year. I had stopped for a little sob and to phone home (no one came to collect me so I had to run on then) and back around the course - which was considerably less busy than the first time around, we stuck together until about 15 miles.  At this point Husbando told R and I to go on as he was struggling.  R and I carried on together until just after 16.5  miles - and the second ascent of the slope that masquerades as a hill, but I felt I was holding him back.  Despite never running this far he was absolutely smashing the distance, looking light and easy on his feet.  I was beginning to feel the effects of lots of miles and tendonitis in my right knee.  My 18th mile was my slowed mile, but still below the 9min/mile target that we had set ourselves.  I began to think that I might, just might, be able to better my 20 mile PB - which I remembered as 2hrs 50mins and change.  But I was going to have to pull my finger out.  Which was fine as in my memory it was down hill all the way to the finish.  I'd forgotten a sneaky little rise in the last mile, but I pushed on - remembering to smile for the cameras as I passed them. 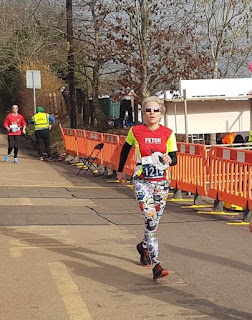 The finish was not as downhill as I remembered from previous years, but I tried to pick up the pace a bit.  I crossed the finish line and stopped my watch - 2hrs 49mins and 44secs - I'd done it.  My fastest paced long run ever!  I stopped to chat with friends who were waiting at the finish line (thank you to them for the photo) and to wait for Husbando to cross the line - which he did about 45 seconds after me.  After that we collected our medals and goodie bags, found R (conscientiously doing his stretches) and headed back to A&G's for post race scoff and more gossip.

Garmin and Strava have both been playing up today - so it took ages to upload and do the normal post race faffing and checking of splits etc.  Now that I have, and now that I have checked the results from previous years I find that I was comfortably inside my previous PB of 2hrs 52mins 13secs! Still, I am glad I pushed myself - I felt as though I could comfortably have run on for another 6 miles, and even if I had dropped to 9min/mile pace (or even a bit slower) I would have comfortably run another sub 4hr marathon - heck, at 9min/miles I'd have had good for age for London in the bag.  Let's just hope that I can replicate this later in the year.

Thank you to everyone who was supporting on the course, whether they are official marshals, water station volunteers from the ACF, police cadets and Scouts or friends and family cheering us on- your support was much appreciated! 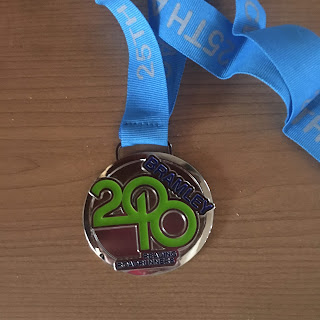