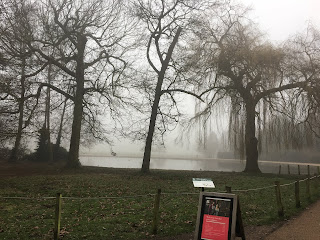 I hadn't planned to go to Osterley parkrun this morning. I had intended to go to Tooting Common parkrun in order to tick off the letter T on my alphabet challenge but I changed my mind.  After looking at several possible locations and working out journey times and the possibility of meeting up with friends Osterley came out as the most likely contender. 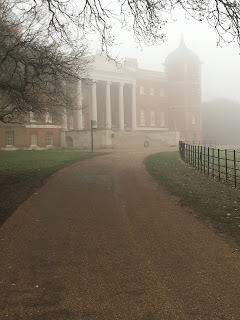 Osterley parkrun in held in the grounds of Osterley House - a Georgian estate in Isleworth.  Walking from the tube station (Piccadilly line) up to the start along a tree lined drive we passed cattle and horses grazing in the parkland - it didn't feel as though we were in an urban area, but. in the countryside!  Apparently Osterley, now owned by the National Trust is one of the last surviving country estates in London.  The house was described by Horace Walpole as the 'palace of palaces' having been designed in the 18th century by Robert Adam for the Child family to entertain their  friends and clients.

Despite the mist, approaching the start was impressive.  Past a lake with swans, ducks, geese and moor hens, and then the house itself! A very grand portico emerged from the mist and as we were very early we had the place to ourselves.  Soon the parkrun magic started to happen... people in lycra started appearing, a finish funnel was set up and soon we were warming up, listening to the first timer's brief and getting ready to start... right in front of the house. 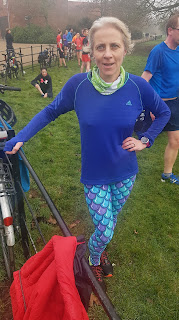 The course was on hard paths and flat.  There was a section that felt like it was ever so slightly downhill, but I never found the corresponding up hill, so maybe I was imagining it!  The paths were wide, so the congestion at the start was very short lived.  I found the going pretty hard for the first mile - I didn't look at my watch until the beep told me that I had done my first mile.  No wonder I was finding it hard going my pace was 7.13min/mile.  I eased off for the second mile, but was still kicking along quite nicely.  The marshals were friendly - I tried to thank them all as I went past.   My younger daughter had come along for an outing, she set off after the tail walker with the intention of walking one lap and taking some photos.  About half a mile before then end I ran past her, she told me that I was in 64th place.  At this point I was tempted to let some people pass me so that I could get finishing token 69 for the second week running, but looking at my watch I could see that I might be able to get a sub 23 minute time. 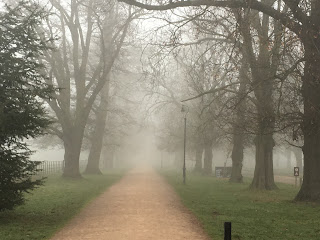 I've only run sub 23 minutes once before - and that was on the old Fulham Palace parkrun course that was short.  My next fastest time was 23.10 at Northalla Fields back in March 2016.  I didn't think it would ever be possible to run faster than my Fulham Palace time... but I was wrong.  By a whole 2 seconds.  Today I ran 22:41 - a brand new shiny PB for me.  Utterly thrilled with that - although apparently I wasn't trying hard enough if I could a) thank the marshals and b) didn't need to cling onto the fence at the end! 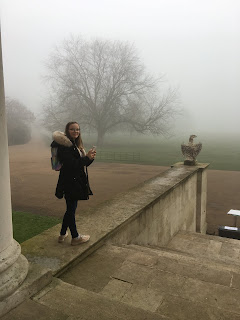 After the run we celebrated with coffee in the cafe.  One of the benefits of being at a National Trust property is that the cafe is great (the cakes looked really yummy and the bacon and egg rolls that my friends ordered looked fabulous).   There are also loos near to the start and parking is free.   Sadly we didn't have time to look around the house today - but hopefully we can come back again, run again and see the house.

Thank you to all the marshals and volunteers who made today happen!