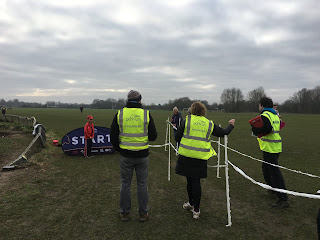 After a long week playing soldiers (let me tell you that night time temperatures below zero make time pass very slowly indeed) I made a last minute decision to dump all my filthy kit in the middle of the bedroom floor, repack quickly and jump on a train to Cambridge where Husbando was working at a book fair.  He had picked up a some tickets for Rebus: Long Shadows at the Cambridge Arts Theatre so I was looking forward to a night of culture and a couple of G&Ts, but at the back of my mind I was planning where I would parkrun on Saturday morning. 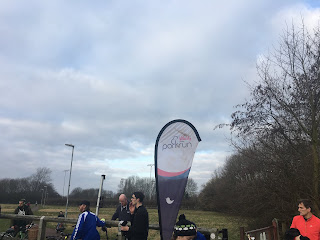 I've already run a couple of times at Cambridge parkrun, and have visited Huntingdon and Wimpole, so it was great to remember that there was a relatively new run at Coldham's Common parkrun which was very close to the Premier Inn we were staying in.  I was a little bit cross with myself for not having planned ahead and listened to the profiling of this parkrun on the excellent WithMeNow podcast - but a quick bit of googling tells me that Coldham's Common is one of the largest green areas in Cambridge.  There are sports pitches and a mixture of grassland, scrub and pockets of woodland.  In the 17th century it was the site of an isolation hospital for small pox patients.  In Victorian times the area was mined for coprolite (fossilised faeces - which was used to make jewellery, lovely).  I didn't see the famous rifle butt hill - but apparently this is the third highest point in Cambridge.  As I left the hotel I saw couple in running kit and what looked like a 50 shirt - I asked if they were going to parkrun and if they wanted a lift - but they were heading to Cambridge parkrun in Milton Country Park.  Parking was easy in the Abbey Leisure Centre carpark (where loos are also available), and a brief warm up jog revealed that I had made the right choice to wear trail shoes as the course is entirely on grass. 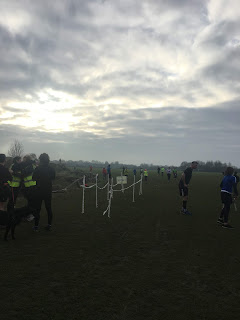 During the run brief I learnt that the parkrun was still in its 'trial period' - I didn't know such a thing existed, hopefully Cambridge City Council will realise that parker is a good thing and let it continue. I nearly missed the start as I was chatting with a man from Hackney Marshes and the person starting the run was quite quiet and then we were off.  The route was totally flat, around sport pitches and through the wilder part of the Common.  I hadn't run since Sunday, but my legs were still feeling the effects of a marathon last weekend and running around with a rifle and throwing myself over assault courses.  I intended to take it easy and in reality I didn't feel I was pushing myself.  Husbando joked that I would run a sub 24minute time - I told him that this was ridiculous, and then finished in 23:42.  Oops!

After the finish I chatted to a few people, but the coffee van has stopped showing up and I was desperate for a hot drink.  Such a shame that the van wasn't around.  I don't quite understand why such a business would allow a potentially lucrative source of income.  There were nearly 300 runners today, plus volunteers, many of them would buy a tea or coffee and maybe a cake while they chatted and prolonged the parkrun experience.  I do feel that the post parkrun coffee is an integral part of my parkrun morning experience and feel a bit sad when I can't chat to other runners over a hot drink.   On the plus side - I didn't parkfaff all morning and got back to my room with plenty of time to have a hot shower, laze around watching Saturday kitchen and drinking tea in bed before the 12noon check out time!

Thank you to all the volunteers - I particularly liked the big red bow on one of the gates!