School is now out for Easter and time is doing that weird thing where it seems like only yesterday that we were on half term, but last weekend (and my trip to Edinburgh) seems like a lifetime ago!  Finishing school at lunchtime on Friday meant that I could head down to Bath with Husbando (who was on his way to a book fair) and still arrive in daylight - much nicer than arriving in Edinburgh at nearly midnight!I've done a fair few parkruns around Bath over the years, so this weekend we had decided on the relatively new Somerdale Pavilion parkrun.  When I say 'we' I don't mean Husbando and me, I mean the motley crew in the photo above!  It was John's 50th different parkrun location and our fancy dress co-ordinator had organised supplies of John's club vest and glasses so we could all be John in the photo - we even had barcodes to prove it!  I did draw the line at wearing the cow bobble hat though! 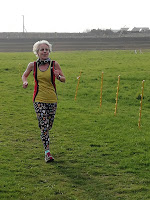 Somerdale Pavilion is the site of the old Cadbury's chocolate factory (that was closed by Kraft in 2010 and production moved to a factory in Poland), the factory has been sold to a housing developer and lots of houses have been built where previously Cadbury's Creme Eggs and Crunchies were made.The developers have gone some way to maintaining the character of the original site - the central factory has, I assume, been converted to apartments with some food/retail outlets to come soon, and the surrounding housing development looks well planned with lots of open spaces, and this all backs on to sports fields and golf ranges.  It is also now home to the Sham Cross Cyclecross course - which is where parkrun happens!

I was the first of our group to arrive.  In fact I think I arrived before anyone from parkrun - which gave me plenty of time to worry about which car park I should be parking in, go for a warm up jog, re park my car etc. etc.  I investigated the start location, the cafe and the loos - very nice loos inside the pavilion itself. It was a wee bit chilly and the course is quite exposed, so I wasn't looking forward to running in a vest top!
Soon we were all assembled at the start as the run director described the course and announced several milestone runs.  The course can only really be described as 'bonkers!'  It is marked out for the cyclocross so there is little chance of getting lost on the 2 lap route, although you do tend to lose all sense of direction as you turn left and right with alarming regularity around some very tight bends!  The famous 'curly curly' comes towards the end of each lap and I must admit to being very glad when we got to the centre and reversed direction to come out again - I was beginning to get a bit dizzy!

I set off a bit too fast, nearly good a tumble on the uneven ground at the first sharp corner, completing my first mile in a smidge over 7 minutes.  The wind was evil!  And the twists and turns meant that it was only a matter of seconds before it was going to be full in your face again!  I thought I might be first female, but wasn't sure as it was impossible to keep track of who was where!  I thought there were two women close behind me and tried to keep track of whether they were gaining on me or not.  The ground underfoot was uneven but, thankfully, not too muddy.  As I passed my friend who was tailwalking she confirmed that I was first lady, but I had no idea if I could hold on to the lead until the end, so I just kept going.  I didn't look at my watch, I didn't trust myself to look at my wrist and not fall over!  As I crossed the finish line I did look at my watch 22:39 it said - which would not only be a PB( by 2 seconds), but the last number I need for stopwatch bingo.  When the official results came in (very speedily) I think I was more upset to miss out on the stopwatch bingo than a new parkrun PB!  (Official time 22:42).  I was first lady to finish, coming in 11th overall, John finished 4th overall and as we waited for the others I went to fetch the shortbread and ginger cake from my car and John poured the fizz! 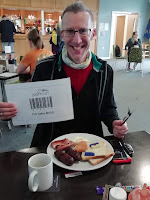 Once we had all finished and after John had been reunited with his car key (that had fallen out near the start) we made our way to the cafe in the Pavilion, breakfast looked good and was very reasonably priced.  We also ate cake and some people had CurlyWurlys too before we all had to go our separate ways.  What was lovely to see was the number of parkrunners enjoying a post run coffee and chat.  This has always been such an important part of the morning to me, but at a few parkruns recently not many people seem to go for coffee. 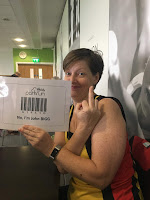 As always, a huge thank you to all the volunteers who made this morning possible!  A great parkrun - very unique!  I'd love to have been a fly on the wall when the route was originally proposed - it is utterly bonkers, harder to run than you'd imagine for a flat course, but great fun!  Thank you! 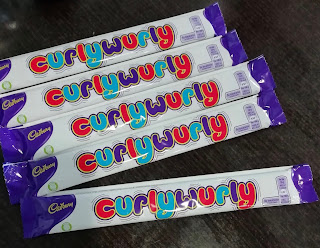