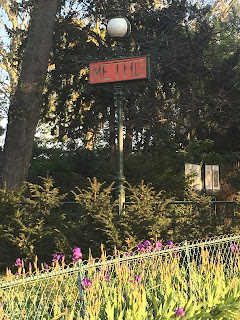 (It strikes me that I may well have used this blog title before, but recycling is all the rage these days!)

This year sees Husbando and I celebrating surviving 25 years of married bliss and me hitting yet another landmark birthday.  What started as a daft idea, around the kitchen table over one too many bottles of wine, became a plan for 6 of us to travel to Paris, do some running, eat some food and see some sights.  Two members of our party had never run a marathon, one swore he'd never run a marathon, but was fairly easily persuaded that it would be great fun.  His wife, the sensible half of the partnership, declared that there was no danger of her ever running more than a 10k, but that she was more than happy to be our bag lady!

As it happened, our non running friend didn't make the trip as her father was unwell, but the rest of us set out on Friday in high spirits, arriving in time to collect our race numbers from the Expo and do a little shopping for 'essential' running kit before heading off for supper at one of our favourite restaurants. 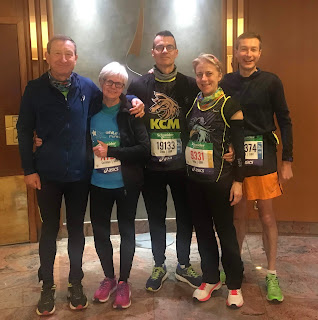 I'd brought my park run barcode with me and was determined to complete a French park run.  After a week that was light on running there was always a risk that I would run too fast at parkrun, so I was pleased to meet up with an old university friend and enjoy a sedate, but chatty, 29 minute run around Bois de Boulogne parkrun.  The attendance was vastly inflated by the number of tourists, but we were made to feel very welcome by the volunteers and locals.  This is a fabulous parkrun - it has the potential to be really fast, hopefully I can come back one day and run it for a time.

We all got an early night last night.  Our hotel put on an early breakfast for the marathon runners and we discussed how bitterly cold it was outside as we ate our porridge.  Two years ago it had been 26C in the shade at 8am, this year it was 1C!  We were wearing just about all the extra layers we could and procrastinating for as long as we could.  Eventually we could wait no longer.  Off we set.  We were walking down the stairs from the reception of the hotel at 7.15am local time (so 6.15am at home) when Husbando's phone rang.  He answered it to hear that his father had died. Not the news we expected to hear at all.  Husbando was poleaxed - one minute walking down the stairs, the next he was sitting on the floor.  Very quickly we knew that we would go ahead and run - what good would going home do?  We spent most of the journey in to the race start trying to get in touch with family and friends. 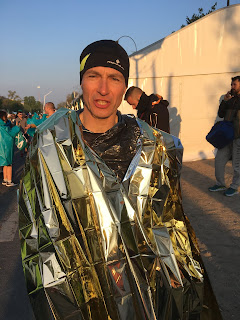 We still arrived at the start with plenty of time, dropped off our bags and made our way to the starting pens.  And here there was a HUGE issue.  We could not get in to the pen.  The pavement was packed with runners but they wouldn't open the pen (recommended time to arrive was 8.10am, we were there at 8.10am).  The crowds were huge.  We'd been told that entry to the pen closed at 8.25am (for an 8.40am race start) but at 8.25 we were still waiting to get in.  Eventually a tiny gap was opened in the fence with one person checking race numbers.  It was truly terrifying.  At one point I got pushed over from behind, and as I fell to the floor I could feel the crowd surging forward.  It was really easy to see how things could go very badly wrong very quickly.  I was very lucky, I didn't realise how badly I'd bashed my shoulder until after the marathon and the bruises on my legs will heal, but I was very shaken by the experience.

Once we got running things improved.  We started off together, but a wee stop for me at about 4 miles saw us split up pretty quickly.  Husbando waited for me, but the others went on.  We were making good time and it felt easy.  We made some gallows humour jokes (as one does) and enjoyed the cool weather - I say 'enjoyed' but in reality I was whinging about the fact I couldn't feel my fingers! We ran on together into the Bois de Vincennes, when he decided to take a wee break.  He said that I should carry on and he would catch up.  So on I ran.  We were both on our 'phones a lot as we tried to contact friends and family, and I got a text from Husband saying he thought he'd run past me, so I tried to catch him up.  Further 'phone calls and texts followed and we established that I was probably ahead of him.   Ah well, I eased off the pace a little and kept my eyes open.  The pace felt good, the weather was lovely, the Soreen Mini Malt Loaves were delicious.  The runners were plentiful, the course was crowded - and to be honest when the supporters are on the green 'racing line' you know that the course is considerably narrowed!

From about 20km my tummy was really painful.  I managed to hold it together until I saw some portaloos at 30km.  I trust that the portaloo I used will never be used again.  I was not a well bunny!  While I was 'otherwise engaged' Husbando texted me to say that he had just passed the 30km mark, so it was up to me to catch him up again.  We were obviously both running well as it took me nearly 10km to do this! 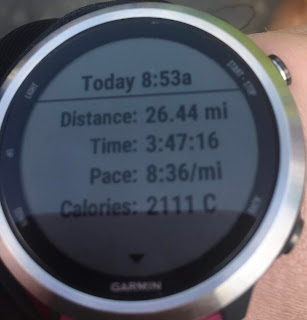 I hadn't for one moment thought that getting a good time was on the cards today.  I just wanted to clock a sub 4hr time to prove that February's time wasn't a fluke, but with about 6 miles to go I realised that I could get a good for age time for London if I didn't let the pace slip.  The last 6 miles of a marathon are the longest 6 miles, but I still felt fairly chipper so decided to ignore the voice in my head telling me that I am not capable of running well and just bloody well get on with it!  The course changes meant that the final stages included some long, steady, uphill sections that were really rather tough, but I refused to give up.  With about a mile and a half to go I spotted Husbando ahead and 'sprinted' to catch him up.  We had a little chat and he told me to go on as he was feeling a bit blown, so on I went over all the sodding cobbles!

Running up Ave Foch, glancing at my watch, I found it hard to believe I was actually going to do it.  I was going to get a GFA time for London and Boston.  How did an 'okayish' runner manage this?  Diet and training played a HUGE part!  But if I can do it so can anyone! 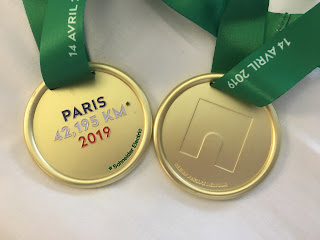 There were many tears at the finish.  The four of us who had set out together all ran really well, three PBs and a first marathon time (the first marathon time being faster than any of our PBs!) I had a wobbly moment which involved me thinking I was going to throw up, faint and poop my pants at the same time!  I ended up crouched by the railings crying while the first aiders tried to work out what on Earth the mad old woman was on about!

The medal is... minimalist... but actually not as bad as it looks in the photo.  We made our way back to the hotel (how many stairs are there on the metro?) showered, made yet more 'phone calls before heading out to eat our body weight in steak frites!

As road marathons go, Paris is beautiful -but the arrangements at the start this year would make me think very carefully about whether I would do it again! 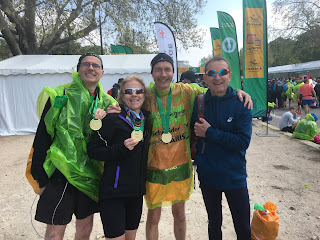