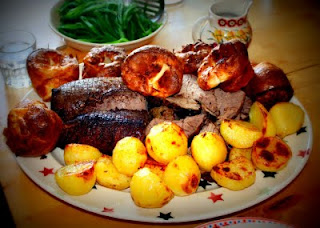 And I don't mean breaking records while running marathons! But more of that later!
It has been a good week, running wise. I have already written about my 3.5 mile that turned into a nearly 6mile run, so I won't relive that one again! I had time to fit in a 4 mile run on Friday before an Easter egg hunt for the children and supper with friends - first barbecue of the year. It got very chilly in the evening, but we were stoic and sat out until about 10pm, warmed by freely flowing conversation and alchol.
I took a day off running yesterday. I did try the Zumba game for the Xbox 360, but I am obviously completely uncoordinated. It is a wonder I can put one leg in front of the other when running based on my failure to grasp even the most basic steps on this dance/exercise game. I will try again, but probably without the children 'encouraging' me!
This morning husbando had to go out at about 6am, so I asked him to bring me a cup of tea and a cereal bar before he went. I vaguely woke up to eat/drink these and then dozed for a couple of hours. I had frequent visits from the children wanting cuddles - but at least I could pretend to be asleep! I am not keen on early morning runs for several reasons. I either run out of energy because I am trying to run before I eat breakfast or I feel sick because I am trying to run having only just eaten breakfast. This very early morning snack in bed seems to have done the trick. I was out of the house just after 8am, when it was misty and chilly and had a pretty good run. I ran 8 miles in 73 minutes, so I need to work on speed a bit! I saw a hot air balloon landing and, by the time I got to the bit of the road next to the landing field, the passengers were standing around drinking champagne!
Here's a bit of advice though, if you need a pee after you've been running for 1 mile the need is not going to go away! You will spend the rest of the run wondering how long you can hold out, looking longingly at every tree and wondering why you are wearing dayglo pink that means that you can be seen from outer space! I had to give in eventually (at 5.5 miles) and just had to tell my self that if Paula Radcliffe can get caught short - then a mere mortal like me is bound to need a pit stop from time to time!
The rest of the day has been spent at home with the family. Sundays where we are all in the house (husbando got back at around 9.30am) are rare indeed. We had a lovely lunch at about 4pm, even if the beef was a little too well done for my liking.
Next week is a busy one. I am away for a few days, but will try to run most mornings. I am now thinking that I may be able to take part in the Alton 10. I shall see how this week goes, and maybe run most of the route next Sunday and then see how it goes.
Posted by MrsBridgewater at 17:18