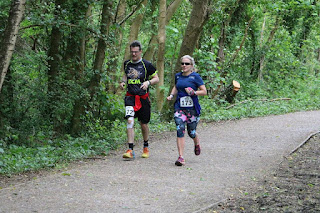 When I signed up for this event, I hadn't got a place at the London Marathon, so I wasn't at all concerned about running it three weeks after Paris.  I'd taken part in last year's event, which was On the Whistle's first event, and had a really lovely time, churning out 35 miles in the 6hours available.  There was never any doubt that I'd be on the start line, but what came next was more uncertain. 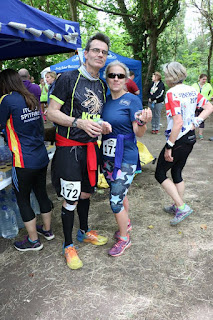 As with last year, Husbando came too.  We parked the car, bumped into one of my very favourite running people, who is injured at the moment.  He was totting his camera and accompanied by his dog.  We collected our numbers, stowed our bags in the tent, chatted with friends and waited for the whistle to send us off on our way.  We were in good spirits and the first half mile was uneventful.  That's right, the first half mile was uneventful.  Suddenly Husbando was on the ground.  He'd gone over on his ankle.  I stayed with him for a while - it didn't look good, and he told me to go on.  After checking that he could stand up, and bear weight on his leg, I did just that.  I stopped to tell the marshal at the turnaround point to keep an eye out for him and, as we were chatting, I saw Husbando approaching, so I waited for him.  We bimbled on together, Husbando's ankle and knee were not good, but he persevered and very nearly ran 4 laps, pulling up about three quarters of the way around lap 4 and walking the last bit to qualify for his half marathon medal.

I continued on, I adopted a run 9mins, walk 1min strategy,  interspersed with stops to feed my face at the aid station.  I have strict rules about my run/walk strategy.  If the 1min walk coincides with a downhill stretch then you miss the walk break and carry on running until the next scheduled walk break.  This wasn't really relevant today as the course was pretty flat.  Another rule is that, if I miss the start of the minute walk then it is forfeit and I carry on until the next walk break.   I skipped quite a lot of walk breaks, some of them to make up for spending too long at the aid station, others to try to catch up with a runner I fancied chatting to, and to avoid being lapped by a friend!

I do love an event where I get to see so many friends and so often!  It is even better when the weather is kind, which it was for most of the day.  The forecast had threatened rain from about 11am, but it remained dry right up to then end of my 7th lap (8 were needed for a marathon).  I am pretty certain that, had it been raining from 11am the distance I covered would have been greatly reduced!  As it was I finished my 24th marathon, 5th this year and 3rd in April in 4hrs44mins.  Strava tells me my moving time was 4hrs 21 - which sounds about right as I did spend a lot of time faffing about.

Huge thanks to On The Whistle for another great event!  I'm off to put my feet up! 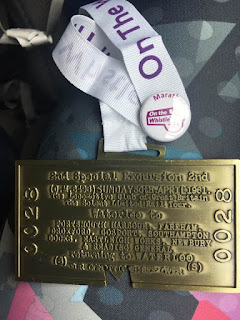