Hotter than a sauna in the Sahara! 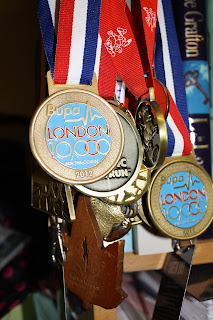 With apologies to my lovely friend Maura whose description of today I have paraphrased as the title for this blog!

After not running 2 races already this year due to injury, there was no way I was not going to run the Bupa 10,000m today!  I had no expectations that I would achieve a PB, but I was hopeful that I would finish in a number starting with 5!

I'd stayed in London overnight because Husbando was exhibiting at book fairs, so didn't have the normal early start and train panic that a London race entails.  I got up late (7.30am) battled with the microwave controls in the apartment/suite we had rented and ate breakfast looking out a a clear blue sky, not wanting to know if it really was as hot out there as it looked!  I checked out of the hotel at 8.45am and made the short journey in a very hot tube station to Green Park, bumping into a running friend who happened to be in the same carriage on the underground as I was.  By the time I'd had a quick chat with her in the glorious sunshine and I'd pinned my race number on the announcer was calling for everyone in the red wave to make their way to the starting line immediately!  It was only ten past nine!  How was I going to have yet another nervous wee if I had to go to the start line?  I threw my stuff together, checked my bag and duly headed to the start line on The Mall.  After dire warnings that there were no loos at the start I was relieved to see that there were a few - crisis averted!

Our start pen had absolutely no shade at all!  The thought of standing there for the best part of 40 minutes did not appeal, so on meeting up with a couple  of friends, we found a postage stamp of shade and made use of it.  It was seriously hot by now.  I marvelled at the lady in fancy dress - a guardsman complete with bearskin hat.  I felt like fainting just looking at her.  The atmosphere was lovely, and I reflected on the fact that when I ran this race last year and the year before I hadn't known anyone at the start line at all - this year I knew loads of people!  It is lovely to know so many people who are happy to talk, almost endlessly, about running.

The first mile of the race (I can't think in kilometres yet!) was OK.  I wasn't running very fast, 8.20 minutes per mile pace, but it felt sustainable although I wouldn't have wanted to try to run any faster!  Towards the end of the second mile things started to feel really hard.  Other runners were obviously finding it hard too, I don't think I have ever seen so many walkers so early in a race, even runners with the coveted 'Red A' starting numbers.  But I kept plugging on.  Then I knew I had to be sick.  I've never been sick while running before.  I ducked just off the course and became reacquainted with my breakfast by the McDonalds where we used to indulge in 'eat the menu' competitions when I worked in Clements Lane.  As I rejoined the throng of runners I began to feel very odd.  I was shivering and felt so cold.  My legs were not really responding to the instructions I was giving them.

Somehow I struggled on.  I don't remember much of the rest of the race until I got to the 8km marker and saw someone I knew.  I ran a bit faster to catch Sue up as I just wanted to see a friendly face!  I couldn't maintain the pace though, and fell back again.

The absolute lowest point of the race was when I looked at my watch and saw that it showed '49:59' - the time I'd completed last year's race in - but this year I still had well over 1km to go! (Probably nearer 1.5k/2k, I can't figure those pesky ks out!)

The support from the crowds was much more vocal this year - and there were far more supporters than in previous years, as we came past Horse Guards, with all the temporary seating for the Olympics already in place, the cheers from the crowds really did help me through the final 400m.    Finishing on The Mall is always lovely, with Buckingham Palace as a backdrop, and I have never been so glad to see a finish line.

I don't remember much about after the race, I popped along to see the UNICEF stand, I know this because they gave me a goodie bag, and met up with friends from Basingstoke parkrun and CPRC, I know this because I took photos and photos were taken of me!!  I know I was sick again (because that is hard to forget), but I really was a bit vague about everything else!

I did have nice lunch at Carluccio's - and that seems to have made everything a little bit better!  We did sit outside - which is probably wise, as I smelt so bad I didn't want to near me!!

So, scores on the doors, 56minutes and 41 seconds!  Officially my worst ever 10k time.  Still, it was nice to see The Shard, which looks so much more impressive now than last time I saw it.  And of course, I am now waiting for the email with the link that enables me to enter next year's race a wee bit early as a previous runner.

And now the hard work commences.  I need to get back to being properly fit!  The good thing from today is that my legs felt really good - no niggles or anything.  In fact I was tempted to go out for a run this evening - but my need to plan lessons got the better of that idea!


Posted by MrsBridgewater at 21:37 No comments: 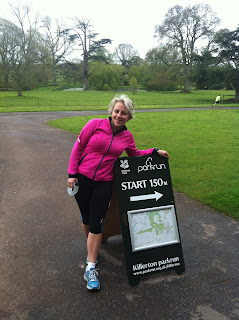 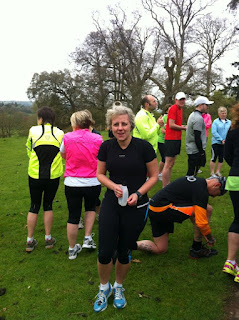 Posted by MrsBridgewater at 23:10 No comments: