Musings, not necessarily on the subject of running.

I was approached by a colleague in the staff room this week.  Given that I have spent most of the week scowling and hissing at anyone who tries to interrupt me on my trek from the chilly building site of my classroom to the relative sanctuary of the ladies loos or the warmth of the photocopier, she was a brave lady.  She'd heard that we lived in the same area and wondered if I wanted to carpool with her and another local colleague.

They are both lovely ladies, but my answer was 'No thank you!'  I didn't hesitate for a second, or say that I would think about it.  I totally understand that it makes sense to carpool, it saves money for everyone involved, it is the ecologically sound thing to do, the thing a responsible adult should do.  But I can't!  The idea of having to fit in with someone else's timetable is too stressful.  I like to leave the house when I want to leave the house, much earlier than most people, and arrive when there are very few other people around.  More importantly, I want to leave when I want to leave after school.  I suppose I could justify my reluctance to carpool by saying that I need to be able to get home quickly if something happened to any of the children.  But that isn't really true.  Husbando could get to the children from his shop far faster than I could anyway.  And what would happen about the radio?  Would we have to talk to each other every morning?  Would they want to listen to music rather than my beloved Radio 4? My car journey too and from work is a little oasis of 'me time' in a hectic day and I'm not going to share it!

Now this is a running muse.  When I run on a road with no pavement, I run, as mandated in the Highway Code, facing oncoming traffic.  Whenever I have run in a road race, whether or not the roads are closed, we are direct to run on the opposite side of the road.  Why?

There was something else I wanted to write about, but as soon as I sat down in front of the keyboard it vanished from my brain.  Or maybe it vanished in those few moments just as I was sitting down, but before my bum made contact with the seat, when my youngest came in asking me to get a cup for her so she could get some water.  I often wonder how many World shatteringly important thoughts have been lost forever because I have been interrupted by small (and not so small) children.

Anyway, it is parkrun day tomorrow.  There was a time when the between Friday and Sunday was known as Saturday, but it is now parkrun day.  I may be tired and grumpy this week, and I did briefly consider missing (I was going to say skipping - but the image of me skipping for 5k is not a pretty one!) parkrun and staying in bed tomorrow morning.  It won't happen, I'll be there at the start line, trying to remind  my legs that they know how to run a wee bit faster than they have in the last few months!

Posted by MrsBridgewater at 21:47 No comments:

Just because I went back to work on Monday I haven't been slacking on the training.  In fact, amid the chaos of returning to a classroom in the middle of a building site, running represents an bit of an oasis of calm.  I tend to run on Tuesdays, Wednesdays, Thursdays, Saturdays and Sundays, but this week I had to rejig things a bit as we went up to the Paralympics on Tuesday evening after school.  We took the three bigger children and had a fantastic time at the athletics.  Super atmosphere and a great night out.  As I type this the closing ceremony is playing in the background.  We've had such a wonderful summer of sport, it seems very sad that it is ending.

I was somewhat apprehensive about today's run.  18 miles is a long way, and my previous long run (15 miles) was a nightmare from start to finish.  And 18 miles is further than 15 miles!  When I finished the 15 miler I was so miserable I considered stopping all this marathon nonsense, and quite possibly quitting running altogether. 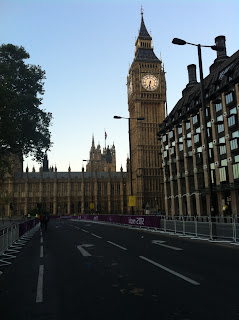 This morning we got up early, leaving the house at 4.30am so that Husbando could get to his book fair in London.  I set out on my run at 6am, when it was already 61F.  I'd been chatting with a running friend about the fact that I was going through a phase of not really enjoying running.  He suggested that I should try running a lot slower than I normally would on my long runs.  With this in mind I set off planning to run 10 minute miles.

It was lovely.  Beautifully blue skies, many roads closed for the Paralympic marathon, and all run at a pace that I felt I could carry in running for ever.  Unfortunately my bladder had other ideas!  Or rather my mind did!  For some reason, the thought popped into my head that it was going to prove impractical to pop behind a hedge if I needed a pee.  From that moment on I needed a pee constantly!  Luckily there were enough Starbucks and McDonald's open!

I ran along The Embankment, with a detour up to the King's Road (Starbucks!) as far as Wandsworth Bridge and then came back along the South Bank, through Battersea Park and back over Battersea Bridge.  As I turned right coming off the bridge I noticed a runner in front of me who was swaying somewhat.  I knew something was wrong, so sped up a bit to try and catch her.  I didn't manage it.  She fell, falling hard against the iron railings and fell, unconscious, to the pavement.  I sprinted, yanking my 'phone out of my pocket and trying to remember what number to dial to call 999!  I checked her pulse and her breathing, and was about to put her in the recovery position when she started fitting.  I was on the phone by now summoning an ambulance.  My instructions were that we were on Chelsea Embankment, 50m east of Battersea Bridge.  I was asked if I could be more specific!  Er, no!  I don't have an OS map to provide an 8 figure grid reference!

Meanwhile the lady (Lisa) was starting to come round.  She had huge lacerations to her face and was very confused.  I was sitting on the ground next to her, holding her hand.  The woman on the phone was asking me all sorts of questions that I really didn't want to answer with the patient listening, but we got there in the end!  As we waited for the ambulance I dialled Lisa's husband on my phone, so that she could tell him what was going on (she had no phone with her).  It seemed a long wait, but the when they arrived they were efficient and friendly whisking Lisa off to St Thomas's.  I phoned her husband again to let him know where she was going.  I hope she is Ok.

Then I had to start running again.  That was hard.  I'd already run nearly 11 miles, and then sat on a pavement for ages getting nice and stiff!  Somehow I managed.  I crossed the river again at some point, running along the South Bank as far as Southwark Cathedral, before coming back and crossing over the Millennium Footbridge (a first for me - I wanted to check it was safe before risking it).  At about 15 miles I suddenly realised that I was able to do this!  I could run 18 miles and I was enjoying it!  I could have carried on much longer, so I figure that I will just accept that I am going to run a very slow marathon, and give myself a time to improve on!

As I ran back along The Embankment I was again on the Paralympic marathon route.  I saw a fair few runners, but not David Weir (it would be greedy to watch him win two medals I suppose).  It was a fantastic atmosphere, with crowds cheering athletes on, and turning to cheer me on when there were no real runners to watch!

I have just one more really long run to do now before THE BIG DAY!  22 miles in a couple of weeks, but I shall just go out slow and steady and remember that the reason I run is because I enjoy it!
Posted by MrsBridgewater at 22:40 1 comment: