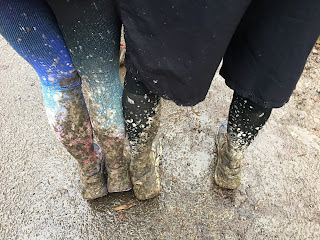 The weather couldn't possibly be as biblical as last year could it?  The rain last January came down pretty much for the whole time we were running and, as we drove towards QECP this morning it looked as though we were on for a repeat performance.   It was a relief to get out of the car to find that the rain had eased off and there was barely a spit of rain while we were running. 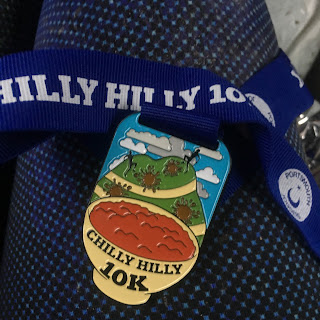 But, oh my word, the conditions under foot were... interesting!  I knew it was going to be hilly (there's a clue in the name) and I knew, from our Wednesday evening runs in QECP, that it would be muddy, but this was mud on another level.  Slippery, slidey mud that had only 2 objectives; to try to steal your trainers and to make you look silly when you fell over!

As to my run... my snazzy Garmin has a 'performance condition indicator.'  This pops up in the first few minutes of an activity with a number that rates my current performance relative to my general fitness levels (or something like that).  Normally it varies between 0, when I feel rough, and +5.  Today the number that popped up was -9.   Minus 9!  Maybe the cold I had been suffering form all week had taken its toll.... Given that I was halfway up the first hill by then it made very little difference - I had to go on. 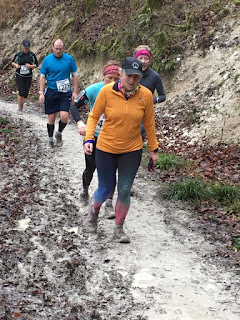 There were loads of marshals on the course - so lots of encouragement and warnings about taking care on the sharp bends.  Lots of banter amongst the runners, we all agreed that it felt a lot more challenging than last year.  Part of this was due to the paths being churned up by logging vehicles, in fact part of the course had to be rerouted due to logging activity.  This was nice because it meant we had an out and back - so more opportunities for banter!

Just after half way I confidently planted my foot on what looked like solid ground, only to have the ground vanish from under me!  I ended up sitting cross-legged in the mud - I think it  must have been quite a graceful tumble, but there was no one there to see!  I took it even easier after that, I just kept going with the thought of a steaming bowl of chilli keeping me going.

The chilli was great, as was the cup of tea I had with it.  This is a lovely race, with the added benefit of a raffle.  I'll be back for more next year, but will be hoping that we have dry weather!

(My Garmin also gives me a recovery time at the end of each run.  The longest I have seen so far is 48hrs after a marathon.  Today is told me I should wait 3.5 days before exercising again!  I think my cold may actually have been man 'flu!)

Posted by MrsBridgewater at 00:05 No comments: 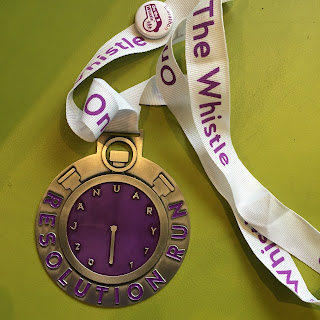 
Posted by MrsBridgewater at 18:40 No comments: 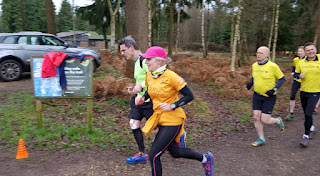 Posted by MrsBridgewater at 19:52 No comments: