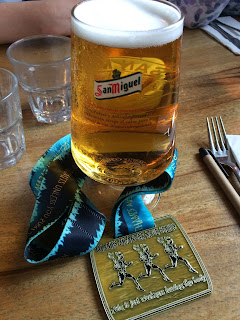 Posted by MrsBridgewater at 00:19 No comments:

For months and months I have been parkrunning with children.  I love running with children, I really do, but I do miss my weekly 'me against the clock, all out blast of (almost) speed.'  From time to time I do get to run by myself.  This normally happens when Husbando and I are away by ourselves at a book fair or some other such excitement.

The last weekend of October saw us venturing to North Wales for a reunion at my old school.  The school closed a couple of years ago and has recently been bought and will reopen with a new name in 2016.  We were tempted north with the promise of food and fireworks!  We stayed on Thursday night in a former boarding house  - possibly the most luxurious B&B I have ever stayed in - ready for a quick run around the old cross country course in the morning.   We had a lovely day at the school, followed by a civilised dinner in the dining hall and some stunning fireworks.  Then we sat in the rec in our former sixth form boarding house and made a pretty good attempt at drinking all the alcohol in Wales!  It was all good fun, and great to catch up with friends I haven't seen for years, but at the back of my mind I knew I had to get up in the morning and get to parkrun.

I'd done my research.  I knew that there were two parkruns in North Wales, I knew which one was closest and I knew the route to get there.  But when the alarm went off at 7am all I wanted to do was stop the infernal noise that was ripping my eardrums into shreds.  I did manage to throw my running kit on and Husbando and I crept out of the sixth form boarding house, into the car and we were on our way - until I called for an emergency stop at the edge of the A55!  Surely all athletes prepare by trying to consume their body mass in wine the evening before a run? Our second stop was at a McDonald's in Abergele for coffee and hash browns (the athlete's breakfast of choice).  I spent a few years living in Abergele - the idea that it has anything as cosmopolitan as a McDonald's is still something of a surprise to me!

Conwy parkrun is dead easy to find.  You just drive along the A55 to junction 18 and follow the signs for the RSPB reserve.  Or that is what I am told - I had my eye's closed and was whimpering quietly to myself.  When I opened my eyes, to bright sunlight, we were in the car park right next to the start, a few steps away from the loos and the cafe.  Perfect.  And the views were stunning - across the River Conwy.  There were people in halloween costumes, so with my hungover pallor I probably didn't look too out of place.  Husbando said he would run with me.  I told him to run by himself as I didn't want to slow him down.

The course was a flat out and back, running towards the castle (it is a beautiful castle) beyond it and then back again.  The only elevation was over a railway bridge.  It should have been a lovely, fast run.  Husbando had a lovely run, not pushing himself too hard but achieving a very good time.  Me?  Well, every time I put my foot on the floor my head screamed.  All I wanted to do was finish the damned run.  I could see it was beautiful, I even appreciated the smell of the sea, but I was sweating pure alcohol.  I struggled to keep going.  All the time I was cursing myself for throwing away a good running opportunity.  I managed to pull a little bit of pace out of the bag in the last few metres of the run to overtake a woman I had been following for ages.  Husbando was waiting at the end of the finish funnel (I had the barcodes in my pocket) and declared himself surprised that I had managed to run at all, let alone scrape in under 27 minutes (26.44).  I was just glad to stop running.

I am cross with myself.  Conwy parkrun is lovely, stunning scenery, flat paths, lovely cafe, great volunteer team and yet I wasted the chance for a good run by over indulging the night before.  I would love to think that I could come back and run this one again, but the realist in me knows that the likelihood of me being back in North Wales again is slim.  This is a shame.  I had forgotten how beautiful it is up there, but it is a long way away!

Posted by MrsBridgewater at 21:44 No comments: