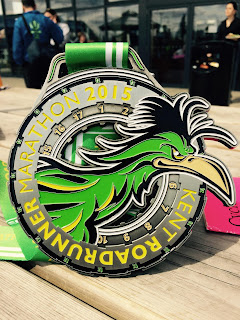 
Posted by MrsBridgewater at 23:38 No comments:

Not the fastest, but one of the funnest! 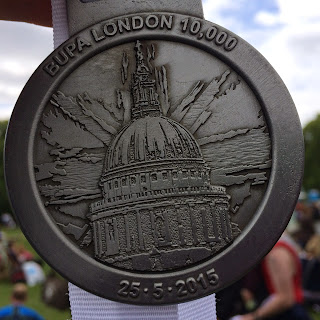 This is one of the first races I ever entered, way back in May 2010 and I have run it every year since.  It seems to get bigger and busier every year, and Green Park felt much more frantic than it had done for the Mile yesterday, with huge queues everywhere!  I bumped into some fellow FetchEveryone runners and chatted with them before heading off to the start.  From my pen, at the back of the red wave, it took only 4 minutes to get across the start line.

The route has changed this year, due to roadworks on The Embankment.  I missed running along by the river, and this year there was no run through Leadenhall Market - which is one of the most enjoyable bits of the run.  To compensate we did run past my old college, King's, on The Strand, but it is something of a mystery to me as to how the wind can blow into one's face when one runs out along The Strand and on the way back!  We also ran past several places where I used to work.  Chancery Lane is a wee bit narrow for such a huge number of runners, but it was nice to see that one of my least favourite workplaces is no longer a bank, it is now a pub!  The new route had several sections where you could see runners coming in the other direction - I kept an eye out for runners I knew and shouted encouragement at the few I saw.

I had aimed to run a little faster than my ideal marathon pace, as I have a marathon on Saturday, but found that I was running around the 8.15 min/mile mark and I couldn't be bothered to slow down.  At one point an elderly lady appeared in front of me as she stepped out from the crowd with no warning causing me to use some choice language!  I was just shocked that the space that had been empty was suddenly full of a woman in tweed 2' away from me and stepping towards me - evasive action had to be taken!  Later, coming back along The Strand, a man stepped in front of me carrying 2 large cups of coffee - that could have been very nasty!   On the plus side - it was somewhere near here that I saw the UNICEF supporters - what a lovely lot they are - and they cheered me loudly!

When I got to the 8km marker I still felt comfortable, so picked the pace up a bit.  Just after the 9km we reached Birdcage Walk - this last half mile was the same as the last half mile of yesterday's race, so I knew exactly how far I had to go and knew that I could carry on pushing myself.  I achieved a negative split for this race purely on the basis of the last mile and a bit.

Afterwards I met up with friends, one of whom had just run her first ever 10k, so of course a celebration was in order! 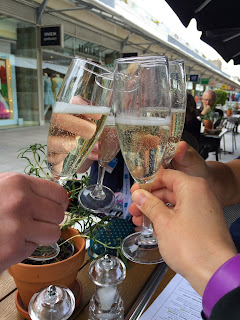 Posted by MrsBridgewater at 21:32 No comments: 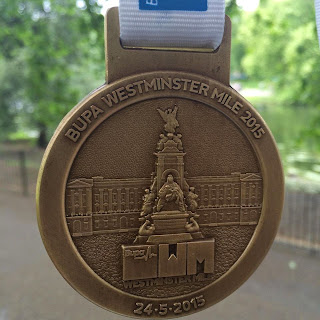 Posted by MrsBridgewater at 20:54 No comments: