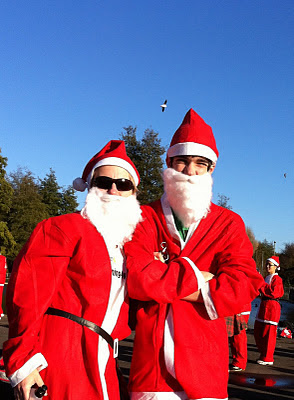 Well, my little rant about strike action seems to have kicked up quite a storm! Nearly 700 people have read that post. Anyone wanting to know more about the NASUWT's continuing action would be well advised to look at the union's website.
I haven't mentioned running for a long time. One reason I haven't blogged much recently was because I was trying to avoid ranting about the strike. In the end I couldn't help it, and it just spilled out of me and onto the screen. Better out than in, as they say!
I have been running, honest! No major races since the disaster that was the Great South Run, but plenty of runs around the village and into the town. I have had to learn to live with running after dark. This means I don't get to see my lovely country lanes and have to run along the pavements into town. I dread to think what I look like, plodding along in a high viz vest, with a flashing LED light on one arm and a head torch! At least I give the cars something to aim at. I don't like running in the dark, but I hate not being able to run!
I've been using my gym membership too. Once or twice a week I pop down there to make the yummy mummies look good! They are manicured and mascaraed (is that a word?) while I am a sweaty mess! I've started to do some high intensity interval training. It took me a while to work out how to set the treadmill, and I'm still not sure I've got the pacing right, but at least I am making the effort, and that has to count for something.
Last Sunday number one son and I took part in the British Heart Foundation Santa Jog. Complete with Santa Suits! A couple of parkrun regulars were there too. At the start a fellow parkrunner and I were muttering about how we'd 'just jog this one' and not really make an effort. That didn't last. As he later said, it must have been the fastest about face from 'Let's take it easy!' to 'Let's go for it!' in the history of running. To be fair, I don't think either of us really believed the other's relaxed approach. No.1 son did well! He went off really fast, and was at the front of the pack for a while .... until his horrible mother saw him ahead of her and decided that he'd have to wait a while longer to beat her in a race!
I keep pondering the idea of joining a running club. There is one that meets at the sports centre next to my school. I haven't yet summoned up the courage as I hate meeting groups of strangers, and my memories of being very unsporty in PE lessons at school are still very vivid. Maybe I'll join up. I'll ask around and see if there is anyone else at the school who is a member and see if I can pop along with them.
Posted by MrsBridgewater at 22:34 2 comments: