parkrun in a shopping trolley. 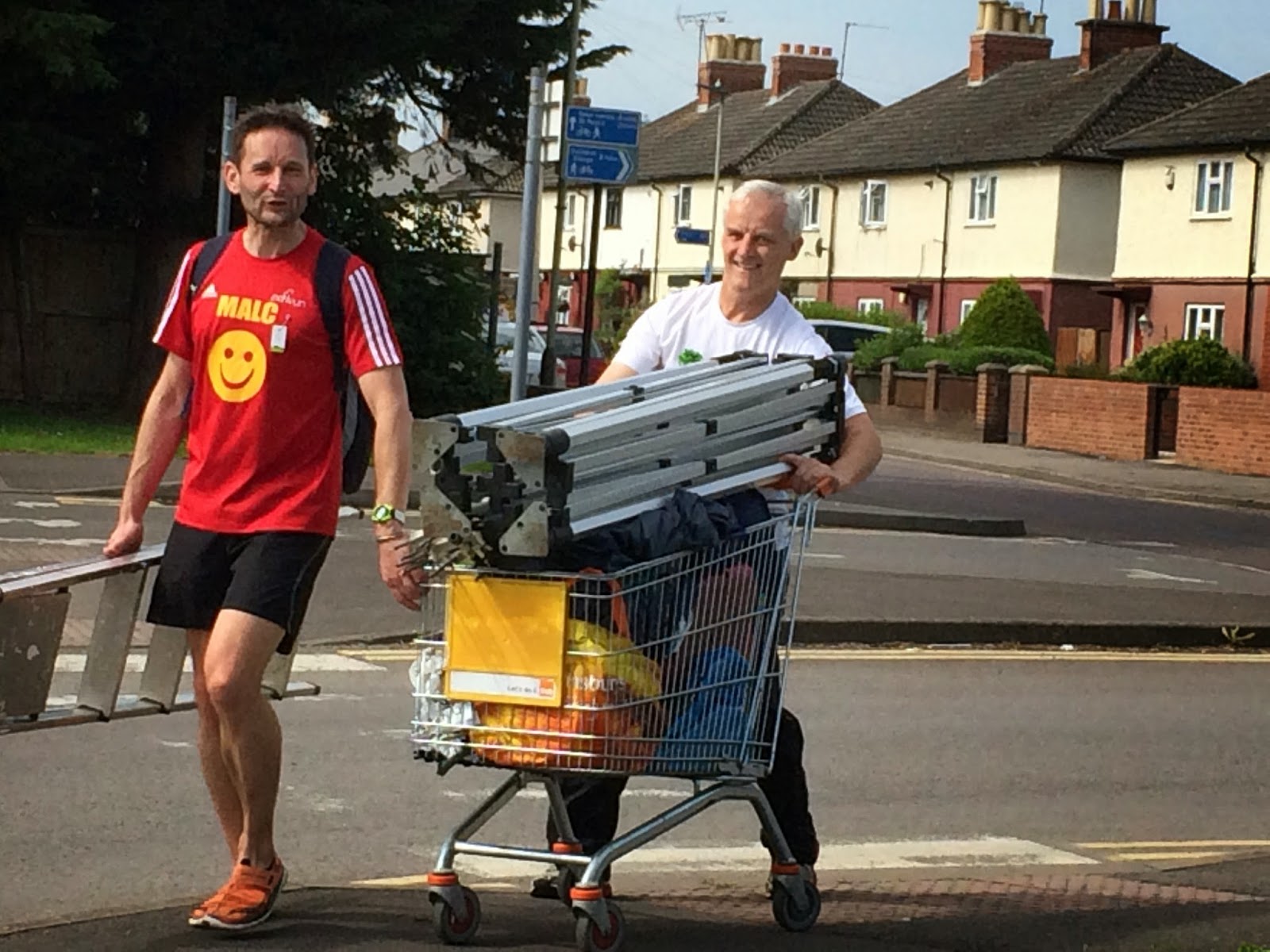 Finding ourselves near Tewkesbury for the wedding of friends this weekend it made sense to find a parkrun to do in the morning.   After a full English breakfast at our hotel we headed to Cheltenham to find their parkrun on Tommy Taylors Lane.  I don't normally eat breakfast before parkrun, but as it was included in out hotel room rate I thought I ought to get value for money!

It was overcast and threatening to rain as we assembled at the start.  The run brief, from event director Malc and first time run director Clark saw distribution of club t shirts and the normal pre run information was announced.  What was noticeable was how attentive the runners were.  It seemed that everyone was actually listening.  As the briefing progressed the Sun came out and I began to regret leaving my sunglasses in the car!  CLC Striders were providing all the volunteer roles this week, including pacers.

We were soon under starter's orders and we all charged across the grass to get to the path around the lake.  I had worried that this would be a boring run.  It is 3 laps which on the course page looks like it might be around a field.  In reality it was a lovely route, mostly on paths around a lake, over bridges, under trees and around a football field.  Husbando was able to run with me this week as he had taken a day off work for the wedding.  I say 'run with me' but what I should really say is 'run at the same parkrun as me' as he had a fantastic run - he spent most of the run with the 24 minute pacer.  He is full of praise for her - she ran a near perfectly paced run and encouraged him throughout, until he struck out for the finish line to complete his run in 23mins 18secs - a parkrun PB for him.  He is a little put out that this is 2 seconds slower than my PB - but I doubt that it will be long before he runs a lot faster than my PB!

My run, on the other hand was not great.  Don't get me wrong, I had a lovely time.  Wearing a 100 T-shirt at a relatively young event (the 69th Cheltenham parkrun) does attract a bit of attention, and I chatted to several people as I ran around, including event director Malc and several of the pacers.  But I was so slow!  I'd wanted to take advantage of not running with a 10 year old to really go for it, but that was not going to happen.  I think that the Ultra and the Marathon I ran last month really have taken their toll.  I just could not run anywhere near as fast as I wanted to.  And everything seemed to ache.  I've never wanted a parkrun to be over so much in my life.  This was not really helped by me starting to run a 4th lap rather than turning off for the finish.  I was a minute a mile slower than Husbando.

We hung around for a while chatting with fellow runners while we got our barcodes scanned, enjoying the sunshine and, in my case, getting my breath back, before heading to the leisure centre to use their loos and grab a drink.  Sadly we couldn't hang around for coffee and a chat as we had a wedding to get ready for.  I am not sure that turning up 'parkrun fresh' would have been acceptable.

All in all a great little (well not so little with 350 runners) parkrun!  Maybe I'll get to do a return visit sometime soon, and at least I haven't sent myself too hard a target to beat!   If I do come back I think I will have to allow more time to look around Pittville Park - it looks much bigger than I thought from running around part of it, and I didn't even see the Pump Room!

Posted by MrsBridgewater at 21:19 4 comments: