I thought that I couldn't run any more!  I was starting to get really rather distressed about this!   I've had a tough few weeks, physically and mentally.  I ended up going to the doctor for some medicine that really didn't agree with me, although it took me a while to realise that it was the medicine that was causing the problem.

Running, for me, is a great source of relaxation.  A time to get outside and think things over, or not think of anything at all apart from the rhythm of my feet as they hit the ground and the beat of my heart as it pumps the blood around my body.  In times of stress my first instinct is to grab my running shoes and hit the road.  So, having hit a rough patch this is just what I did.  Only to find that I could only stagger about half a mile before needing to stop, catch my breath and recover before ploughing slowly on.  Every breath felts as though I were breathing through a marshmallow, and my legs just refused to respond.  2.5 miles into a 3 mile run (and I had to get to 3 miles to pick up the car to come home) I stood by the road feeling absolutely shredded.  I have run half marathons at a much faster pace and felt better after them.  I had no idea what was going on, but was almost in tears about the whole thing!

I'd stopped taking the drugs the previous day, but obviously they were still whizzing round my system. I was concerned that I wouldn't be able to complete a 5km parkrun yesterday morning, so when I remembered that a friend was coming along, and that her 5k time was slower than mine I jumped at the chance to run with her.  She may think that I was encouraging her along, but she was my life line and kept me going. 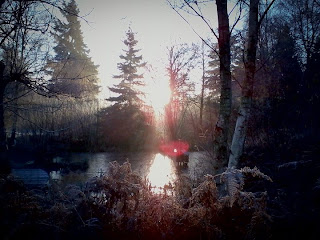 As it was, the weather was cold and bright - lovely running conditions if a little slippery underfoot.  I was still nervous as the run director completed his briefing and led us all to the start line.  Once we set off the nerves dissipated somewhat, helped by the gentle downward slope for the first kilometer.  I told my friend that she was in charge of the pace and I would run at her speed (all the time thinking "I hope she doesn't go off too fast, I won't keep up and will look a right twit!") but I needn't have worried.  We set off at a nice steady pace.  We hadn't seen each for months, so there was lots to catch up on and, as those who know me will testify, I can talk for NATO!  At the back of my mind I was thinking 'I'm running!  My legs work!  My chest feels fine!'  I could have run the whole way easily!

With only 66 runners I can see how it might be discouraging for slower runners if they were there on there own.  At the first Alice Holt parkrun there were over 150 runners, so that feeling of running alone (and wondering just how close to the back of the pack you were) wouldn't happen.  I am sure that as this parkrun grows in popularity this will cease to be an issue.  As for my friend, when she turned up she told me that her 5k time was around 33minutes, well, she smashed that one yesterday, coming in with a time of just over 31 minutes on a challenging course.  I see a sub 30 minute time in the very near future for her.  She really did dig deep yesterday, pushing herself round.

This morning, the nerves returned a wee bit as I had planned a 9 mile run to meet Husbando and No.1 Son for breakfast.  It was very icy and as I started out I began to notice that my chest was tight.  I also realised I was thinking about work, that I'd spent a lot of recent runs thinking about work.  I decided to consciously think of other things (upcoming films, the amount of Chinese food eaten last night, the content of Seb Coe's autobiography) and the tight chested feeling passed!  It was never going to be a fast run, the road was too slippery to take risks, but it was a beautiful, frosty morning.  A chance to remember that I run because I enjoy running.  That should be reason enough!

(Thanks to Mark Cornwell for the photograph)
Posted by MrsBridgewater at 11:41 No comments: