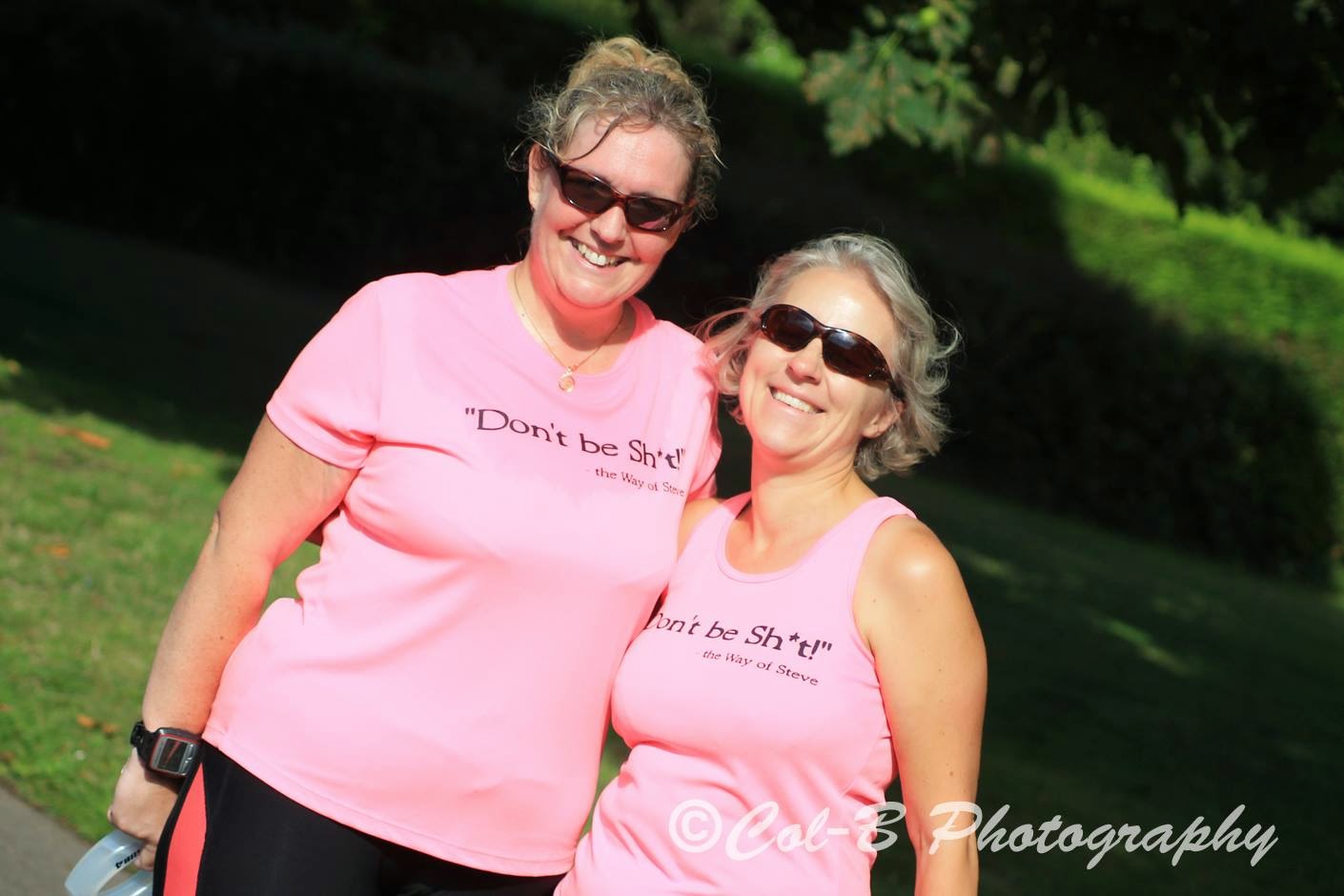 In a radical break from tradition, and by prior arrangement with Elaine, I decided not to wear my 100 club tshirt to the inaugural Woking parkrun.  Instead we were pretty in pink!   Our 'Don't be sh*t!' tops were sold to celebrate the achievement of Steve Way and to raise money for Julia's House Hospice.  They come in many colours, but we'd both chosen pink.

Due to a rather late night on Friday I had not checked the directions to the start and decided to rely on my Sat Nav, which got up almost there.  We were less than quarter of a mile from where we needed to be, but the road was blocked by bollards!  Luckily we'd left enough time for such emergencies and were soon parking in the free carpark at Woking Leisure Centre.   My first impression was that there were hundreds of parkrun shirts! I then realised that I knew loads of people.  I think it is quite possible that I knew more people at Woking today than I know at my home parkrun.  parkrunners had descended on Woking from far and wide and it was lovely to see so many friendly faces.  I just wish that there had been more time to catch up with people. 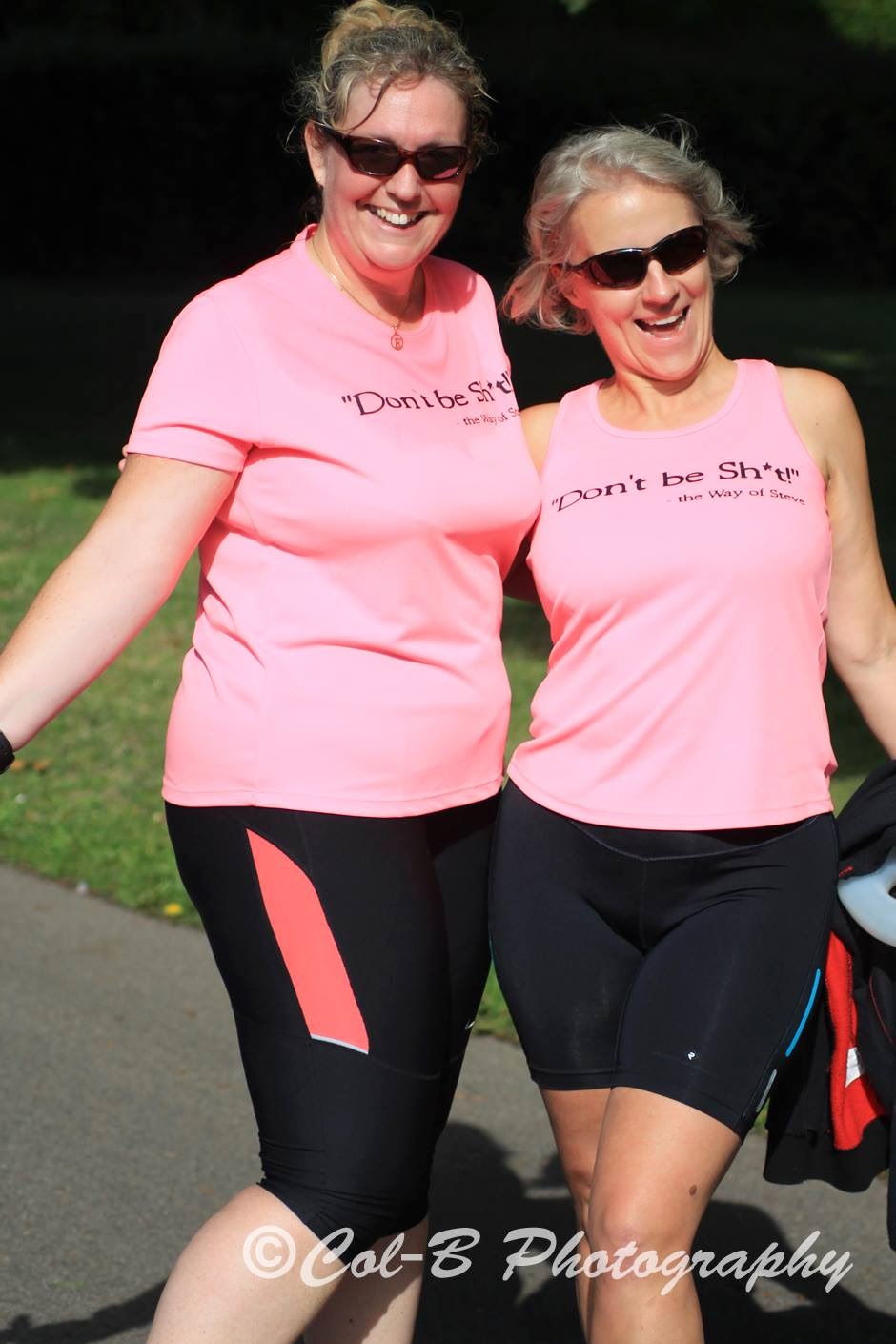 The run briefing took place at the start line.  I think the start line must boast the closest loos to a start line at any parkrun (although I am happy to be corrected) as they are just a couple of steps away from the start.  The briefing covered all that needed to be said, thanking volunteers, mentioning the sponsors etc. without going on too long.  And then we were off….

Three laps of the park sounds very simple and straightforward, but it was a twisty, turny route that wend its way into and out of woodland and over bridges.   Most of the course was on tarmac, with the bit through the woods being on trail.  The marshals were amazing, unfailingly cheerful and supportive as they cheered us on each and every lap.  I ran with the Fredster.  He wasn't happy as he was tired and grumpy following a very late night on Friday.  Still, thinking about how to cheer him up did take my mind off my hangover.   I got to chat to runners while I ran, meeting a lovely lady who was running her first 5k.  The twisty nature of the course meant I not only got to cheer on/hurl abuse at the the speedy runner as they lapped us, but also to see people I knew on various bits of the course as they ran around the convoluted loops.

After scanning our barcodes and collecting bags, dealing with a fainting child and taking photos we made our way to the leisure centre for coffee.  I am not sure that the coffee shop there were quite prepared for an influx of parkrunners all in need of post run coffee, tea and cake!

Thank you to all the organisers and volunteers who made this morning possible for me and 289 other runners.  I hope your event goes swimmingly and grows in popularity.  I'll be back soon I hope!

Posted by MrsBridgewater at 21:14 No comments: 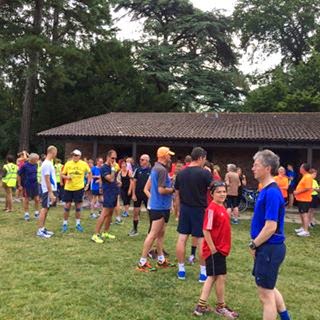 'I'm doing a book fair in Lewes on the 2nd August, would you like to come along for the day?' asked Husbando about a week ago.  I thought about the two Brighton parkruns and said 'Yes!'  I haven't done either of those yet and this seemed like an ideal opportunity.   A couple of days later I remembered that Chichester's first parkrun was coming up soon….. And after a little bit of investigation I found that it was the same day.  I have probably mentioned before that I didn't do geography for O'level, and that I can at times be somewhat geographically challenged.  I thought that Chichester and Lewes were quite close together…..

No matter, Husbando needed to be in Lewes at 7am.  Lewes is about an hour and a half away from my home, which meant an early start for me, young Freddy and Husbando.  We had a quick coffee with Husbando in Lewes and then headed off along the A27 for the 50 minute long journey to Chichester.   The parkrun takes place in Oaklands Park, which is located just behind Chichester Festival Theatre.  Many years ago I saw an excellent production of 'When we are married' starring Dawn French and Roger Lloyd Pack at Chichester.   I recall that the theatre has excellent acoustics and good vision from all seats.  I must go back one day.  Anyway - back to parkrun… the Sat Nav took me directly to the free carpark at the Chichester Rugby club, and from there it was about a minute's walk to the starting/run brief area in front of the cricket pavilion.  The Fredster was desperate for a wee so I asked a volunteer where the loos were.  I was told that they were in the pavilion, but that they were mens's only, but that it was OK for women to use them too, as it was a cricket pavilion.  I did, jokingly, mutter something about the fact that women are allowed to play cricket too these days - and the England Women's team actually did rather well in The Ashes! 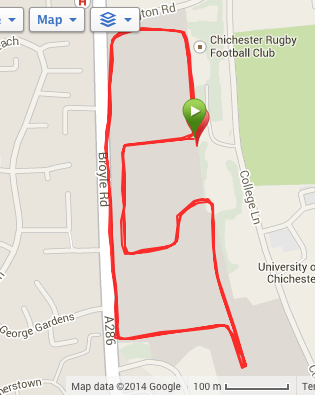 Pre run wees taken care of, we bumped into some familiar faces.  There were far fewer of the regular 'tourists' than usual, but it was lovely to see friends from Basingstoke, Queen Elizabeth, Reading and Roundshaw Downs parkruns as we waited for the run brief.  Event director Mike Houston struck just the right note with his briefing.  Thanking all those who needed to be thanked (sponsors, local supporters and volunteers), giving out all the necessary information and informing the many new new registrants of the procedure to follow at the finish with wit and humour and some oversized barcodes and finishing tokens.

Then we were off!  As you can see from the screenshot of my Garmin trace, it is not the simplest of circuits!  I ran to the bottom of the course (about half a mile) with the Fredster.  The Fredster was VERY TIRED, not just from his early start, but also because he had run four miles the day before.  I could sense that this was not going to be a fast run for him or a fun experience for me.  Luckily, for me if not for him, a friend had volunteered as tail runner for this event, and he was just starting the short out and back section as Freddy and I finished it - so I asked if Freddy could run with him and off I went.  I am not running well at the moment, due to carrying about a stone and a half more weight than I should be, but it was nice to be able to have a tiny bit of a burst of speed.  It was lovely to be able to work my way through the field a bit. 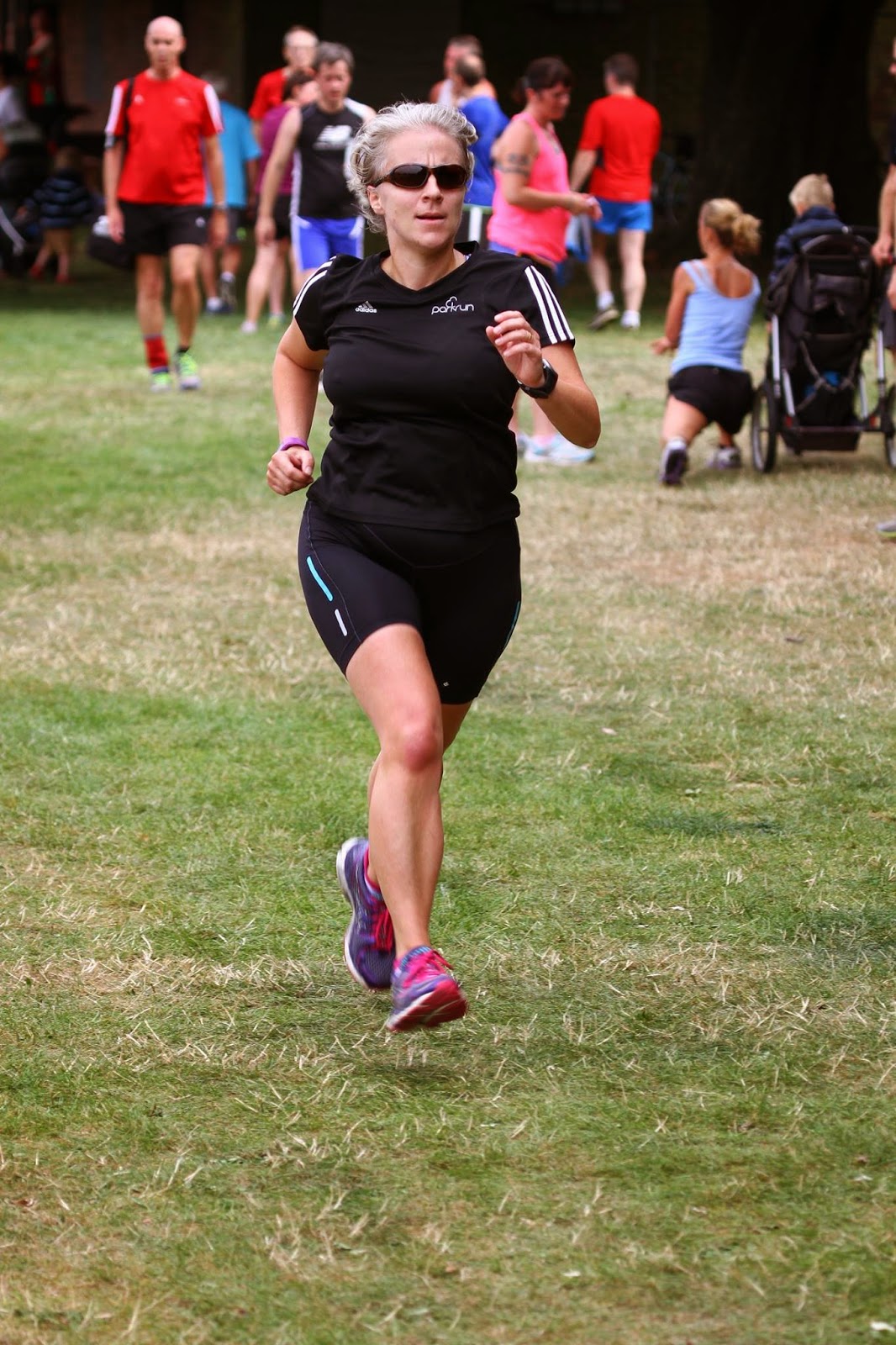 Most of the course is on grass, apart from the long straight bit you can see along the side of the A286 - lovely tarmac, but also a 400m long hill.  So swings and roundabouts there!   The second time up that hill was when we got lapped by the front runners.  I was doing my customary shouting of 'Fast runners coming through - keep left!' When someone asked 'Who is the girl with the lungs?'  It took me a moment to realise they were talking about me!  I guess you can take the girl out of the Artillery Regiment - but she doesn't lose the ability to run and shout loudly enough to be heard the length of a gun position easily.    By the third time round, the incline was starting to make itself felt, but I was spurred on by the sight of the tail runner and Freddy up ahead.  Not only had I worked myself a considerable way through the runners I was going to blooming well lap someone!  Hurrah!  I kept going, then slowed down a bit as I had run off with Fred's water bottle and he was hot and thirsty.  We had a bit of a chat, Fred was happy, the tail runner had to keep calling him back as he was faster than the last person, but all was good.  I left the water bottle and made my way to the finish.  Despite my slow start and slowing a few times to talk to people as we went around, I squeaked in under 30 minutes (29.19). 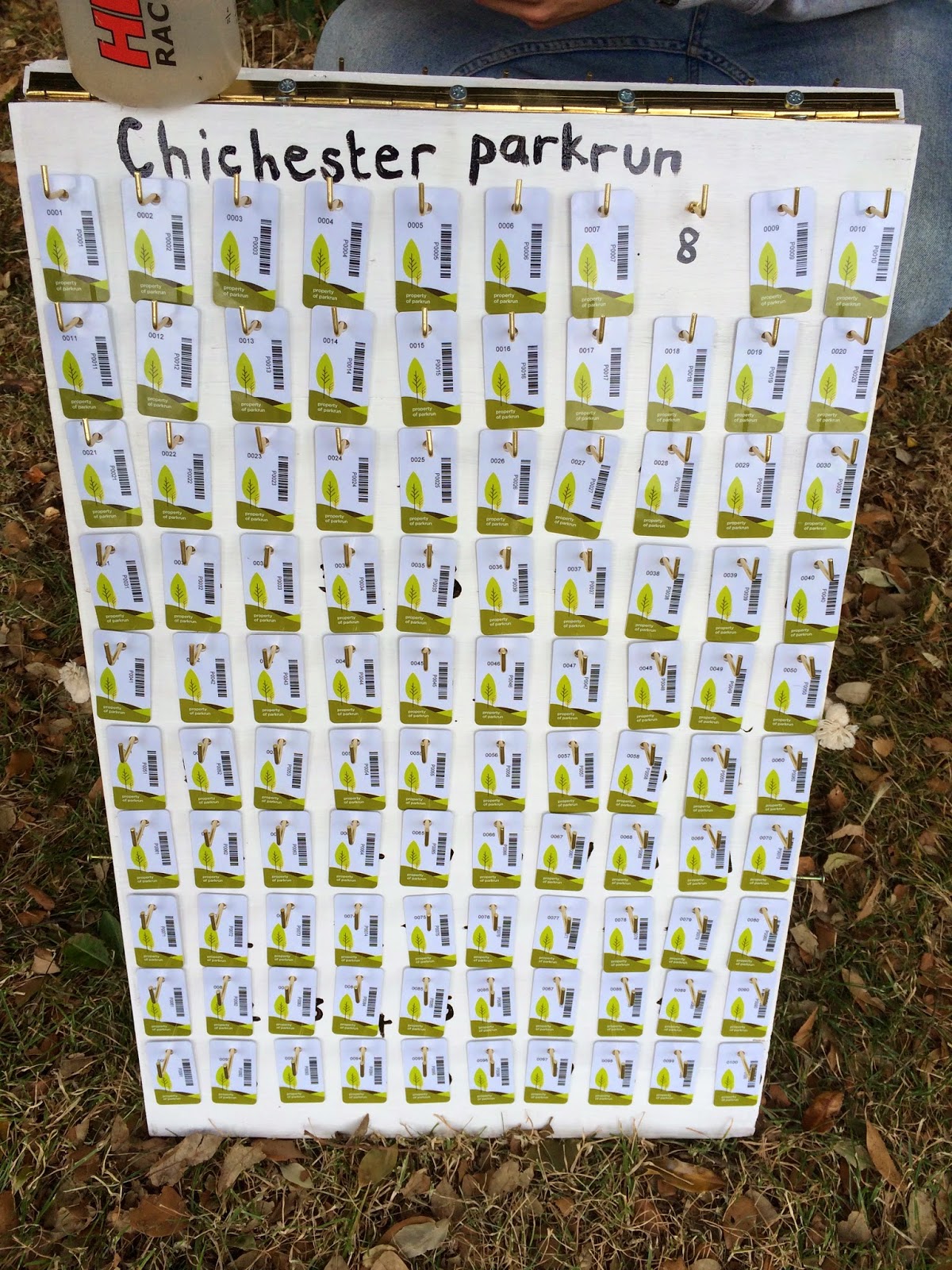 After collecting my token I looked up and saw that Freddy was just about to start his final lap.  I knew he could run faster than the pace being set by the final runner, so set off to run the last lap with him, because I really needed another 400m long incline!  He did pick up his pace, finishing 3 minutes ahead of the last runners, and still managing to put in a sprint to the line.  After sorting out barcodes etc. we made our way for a post run drink and natter at Bertie's Cafe.  Chichester parkrun is another of those lucky venues that have a cafe right near the finishing line - fabulous and brilliant for building a real community.  The cafe is on the first floor and has a terrace with fabulous views over the park - which was lovely, until it started to rain!  But at least the rain stayed away until well after parkrun finished.

Huge thanks to Mike and his team of volunteers for organising another brilliant parkrun!  I am sure I'll be back to run in Chichester again soon.  Oh, and I hope token number 8 found its way back to its rightful spot!

Posted by MrsBridgewater at 16:41 No comments: