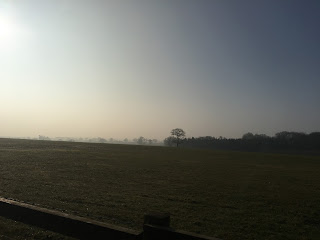 I can't remember why I entered the Larmer Tree Races.  I mean, the guys at White Star Running are all thoroughly good eggs but, and this should not have escaped your notice if you have been reading my blog for a while, I do not like trail races, I am not a huge fan of hills and these are what White Star Running do brilliantly.  However it happened, possibly due to alcohol, I found I had entered the half marathon.  I had heard tales of 'stunning views' and 'awesome bling' that featured peacocks - so maybe these were also factors.  I told myself that a half marathon would be grand.  And then I looked at my training plan.  I was supposed to be running 20-22 miles today.  I knew that there was no way I would run an additional 7+miles on my own, so I emailed and asked if I could change races, hoping for a negative answer.  Of course they said yes!

After a week that involved Ofsted and me catching a cold from one or more of the sniffly boys at school - not good to be sneezing when one's cracked and dislocated ribs have not fully healed - my friend (still sensibly signed up for the half) and I got up at sparrow fart for a journey down to Larmer Tree Gardens near Tollard Royal in Wiltshire.  It was a foggy drive, but the mist was just clearing when we parked our car, collected our numbers and found the port-a-loos.  We met people we knew and waved off the people running the marathon, dithered about how many layers to wear, wondered if there was time for another trip to the loo (there wasn't!) and then it was my turn.

As we listened to the pre-race brief (basically don't be an idiot and follow the signs) the fog rolled back in and the temperature dropped by about 10 degrees Celcius, I was very glad of my extra layer and gloves - so what if no one could see my race number!  The first mile or two felt as though it was all down hill - which was rather worrying as we'd have to get back up them at the end of the run.  It was hard going underfoot - sort of hard packed gravel that punishes feet through trail shoes.  Never mind, we were going DOWNHILL, downhill is nice!  And then we saw a little hill... 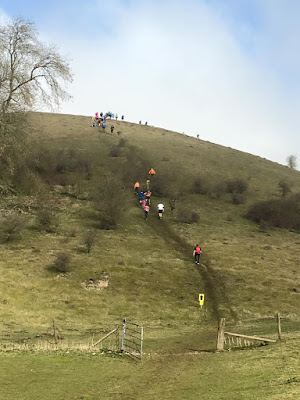 I had decided that I would take this race easily, and just as well really.  The only thing that was running well was my nose, and there was no way I was going to try to run up that hill!  I decided that hills would be renamed as 'walking breaks!'  I don't think I saw anyone run up the more extreme hills, so I didn't feel too guilty!  The views from the top of the hills were amazing if slightly misty in the first part of the race. A big thank you to KE who took the pictures - I didn't have a camera with me, which is probably just as well as I'd still he out there clicking away! 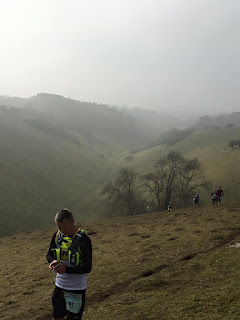 At the top of the hill a voice said 'A bit steeper than Tennis Court Hill' so I knew the owner was a Basingstoke parkrun regular - once again my parlous memory for faces and names had me at a disadvantage, after we'd been chatting for about a mile I began to introduce myself - he said 'I know exactly who you are!'  We bimbled along chatting companionably for about 5 miles, but I sensed that M probably wanted to go a bit faster than I was running, and knew that I would try to keep up with him and pay for it later.  So I decided to take advantage of a huge pile of felled tree trunks in order to answer a call of nature and M ran on.

This wasn't the best place to stop and then attempt to start again.  It was on a long, straight, uphill slope.  It seemed as though I could see straight ahead for a mile or more.  I plodded on.   At the 10 and a bit mile aid station I was told that I was the first 'peacock person' to pass them - so I am taking that as a minor victory as by this time the marathon runners had rejoined us.  At around 12 miles (for us) the half marathon runners joined our route (5 miles in for them) and I started chatting with a one legged runner.  I commented that I was amazed that he could balance on one leg and a blade when I struggled to say upright on 2 legs…. and with impeccable timing I face planted in the mud!  That isn't pleasant at the best of times, but it really does jar damaged ribs!

The last miles were tough.  I was in a lot of pain, but I was buoyed up by the encouragement of fellow runners.  One lady, K, and I played cat and mouse for miles and she was struggling too - cramps in her quads were causing her some distress.  I nagged her a bit when I overtook her standing by the side of the path - threatened to massage her quads for her if she didn't get a move on and stopped to encourage her to keep going!  We were at 18.6  miles so, in theory we had less than a mile and a half to go.  At 20 miles in, having run with her for a while, and with the end nowhere in site, we decided to walk up the last hill.  We are both doing Paris next month, she has a considerably better marathon PB than me, but we will both be in the same starting pen - so might just see each other there! 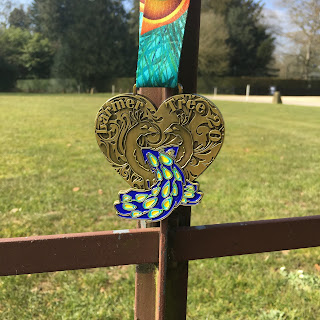 We got to a corner and started running, I had a little more left in my legs than I thought, and pushed towards the finish - on that nasty gravel path - past a very modern folly, through crowds of people cheering, in beautiful sunshine.  What a way to spend a Sunday!  Crossing the line is always a relief though.  I was handed my medal (gorgeous) and a food voucher and then stood around in a daze wondering what to do next!  K crossed the line so I went to see how she was - good, but not great - so I pointed her in the direction of the free massage tent.  I saw her, and her mother a bit later, lovely ladies both of them!  I saw some runners from Chineham Park Running Club - including my new friend M - who gave me a huge hug and a kiss.

I've only run one other White Star Running event - the Giant's Head Marathon - and I was impressed there by the atmosphere before and after the race.  This was no different - I would have loved to stay around and watch all the other runners finish while sitting in the sunshine, but I had to get back to plan lessons for the week ahead.  I commented to a couple of people that this 20 mile race (20.9 by my watch - but that is the joy of a White Star event - you always get more than you pay for) felt much tougher than the Giant's Head, I think that was down to my damaged thorax and rotten cold!

Edited - Am I the only person on the planet who has a totally logical phobia about eating off wooden implements?  Why on Earth would anyone want to put a wooden spoon or fork into their mouth?  It feels revolting… even sitting here writing about it makes my flesh crawl!  Today I almost had a melt down as there was no alternative to a wooden fork.  I managed to eat my macaroni cheese by scooping it up with a slice of garlic bread - but I must remember to pack a spork in my race bag!

That is the last long run before Paris at the beginning of April.  Now I need to cut down the mileage and concentrate on getting over colds and rib damage.  Once again I have managed to time my taper to coincide with a school holiday…. all that lovely free time that cannot be used to run! 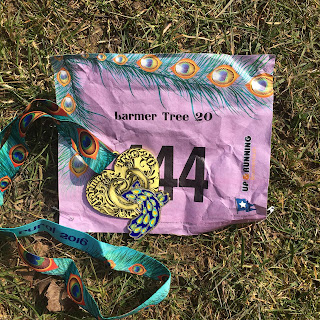 Posted by MrsBridgewater at 19:49 5 comments: