What's not to love about April in the city that believes itself to be the most beautiful in the World?   Admittedly it can sometimes be a trade off between looking at the pavement to avoid canine land and looking up to see the stunning architecture, but Paris is lovely and, on a warm spring day, it is a great city for walking, talking, eating and drinking.

I took the Eurostar out on Thursday, not because I wanted to get away from the children but because it was much cheaper to travel then.  I went straight from Gare du Nord to the Paris Marathon Expo at Versailles.  I've never done a marathon with an expo before, so I had no idea what to expect.  I thought that there would be a desk to pick up my race number and a few stalls selling stuff I didn't need, but the expo was HUGE! All the major sports kit manufacturers were there as well as several smaller ones selling interesting bits and pieces (I now own a FlipBelt) and, had I taken the time to visit all the stalls, I think I could have signed up to enough marathons to guarantee my entry into the 100 Marathon Club with events to spare!  Needless to say, common sense - or the fact that my back pack was heavy - meant that I didn't spend too long at the expo and didn't spend too much money and I didn't enter any races.

Friday was spent mooching around the Musee d'Orsay, looking at some of my favourite paintings and deciding that I really do not like many of Picasso's paintings!  From there it was a short walk over the river to the Musee de l'Orangerie for a long overdue to see Monet's Waterlilies.  I'd been meaning to go to this museum on several previous visits to Paris - but for some reason I've never managed to get there.  The galleries with the water lillies are stunning.  It was a very restful place to be - until a hoard of school children arrived and started to career around the two oval galleries.    It was a day for doing things in Paris that I hadn't done before.  I had lunch near the Grand Arche de la Défense - a structure I had only ever seen from a distance - with the friend I was staying with.  From there it was another first - a trip to Sacre Coeur.  All in all, I walked over 12 miles before heading back to my friend's house.

Saturday is normally parkrun day, but there are, as yet, no parkruns in France - so the Paris Marathon Breakfast 5k was the only alternative!  We set off from Avenue Foch with 3,000 other runners and finished by the Eifel Tower where we were treated to coffee and croissants.  I met with friends from other races and bumped into a runner from Basingstoke parkrun - I had no idea that he was going to be there!  It was lovely to run with my friend from my OTC days - as we ran with chatted with other runners, I even managed to chat in German with some runners from Barvaria.

Sunday… the big day.  Where Saturday had been chilly and overcast, Sunday dawned bright and sunny.  I packed my bag and headed for the start, dumped my bag on Avenue Foch and made my way to the start on the Champs Elysées, along with 54.000 other runners.  It was warm - which made a change from the start line of many recent races, but as it was only 9am I was aware that it was going to get warmer!

At 9.15am my wave went off.  A downhill start on cobbles in brilliant sunshine and a real party atmosphere.  It felt good to be running after the hell that is tapering!  I tried to stay in the shade as much as possible to avoid the heat and just soaked up the atmosphere.  Bands were plentiful - it seemed that the music was almost constant.  Water stations were plentiful, supplemented by the pompiers who had set up extra water stations and were spraying the runners with their hoses. 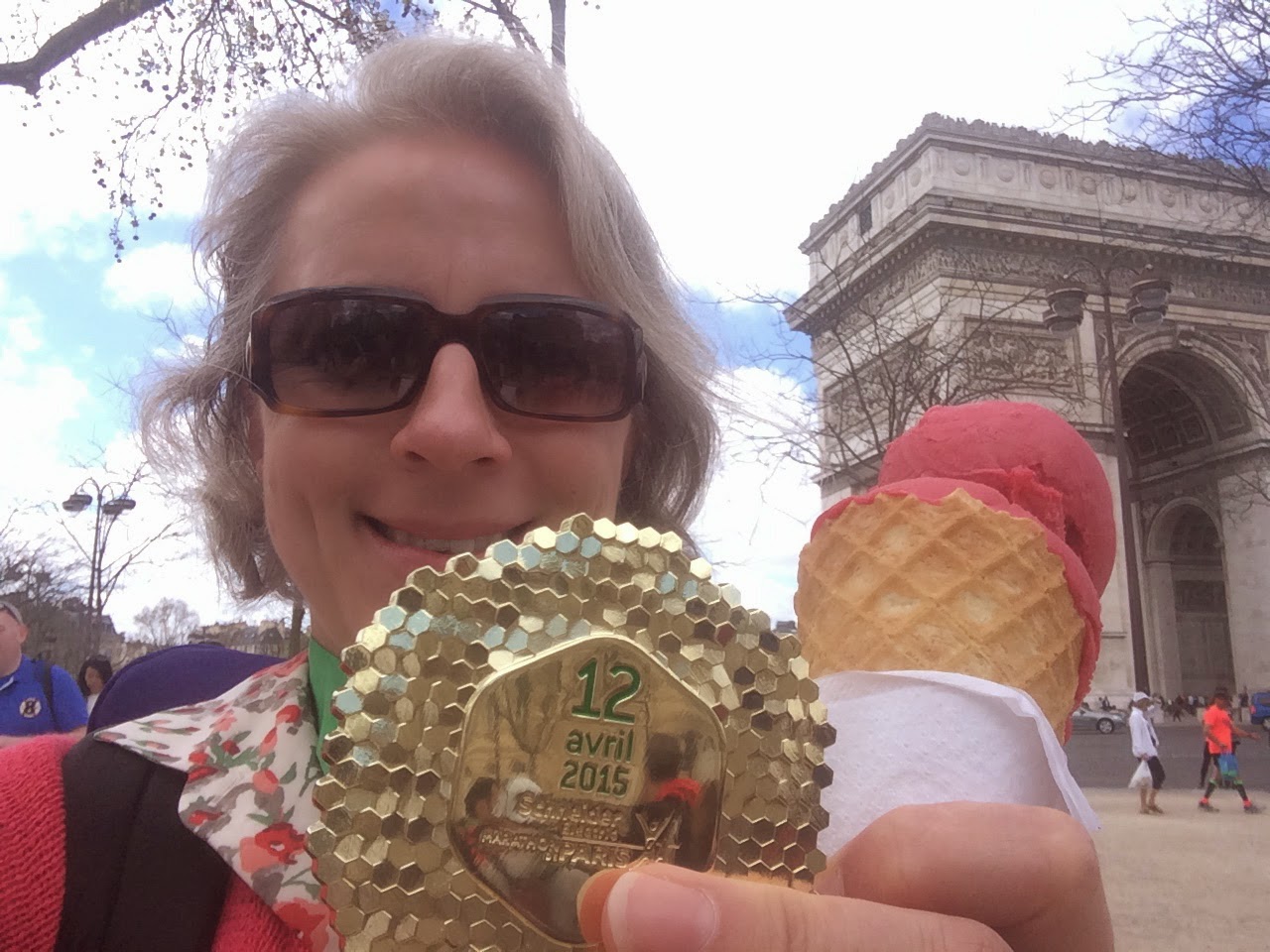 The water stations were on one side of the road only - which meant that if you didn't want water you had to run through people who were trying to cross the road to get to the water.  It was also a bit like running through a fruit salad at times - orange peel, raisins, banana and sugar cubes littered the road along with empty bottles.  We ran through the city and out into the Bois de Vincennes, here the crowds thinned out a bit, which meant that we had fewer bottle necks to slow us down.  At some points the supporters had been so enthusiastic that they took up half the road space.

My Kent Road Runner vest got loads of attention from the supporters, and quite a lot of jealousy from fellow runners.  I was lapping this up and having a ball!  I particularly remember the stretch between 12 and 13 kms where the supporters were particularly vocal.  I sang the Welsh national anthem to some supporters with a Welsh flag, high fived all the children and was laughing and smiling so much that there were tears running down my face.  I have never had so much fun running in my life.

At around 16 miles we went into a long tunnel.  The relief from the sunshine was nice, but it was muggy in the still air.  My Garmin lost satellite reception and when it found it again it said I was about 2 miles ahead of where I should be.  The pace info was also messed up.  There is no way I ran a 7 min/mile at that stage, the pace info never really sorted itself out for the rest of the run, so I covered my Garmin and just glanced at it when I passed the distance markers to try to work out where I was. 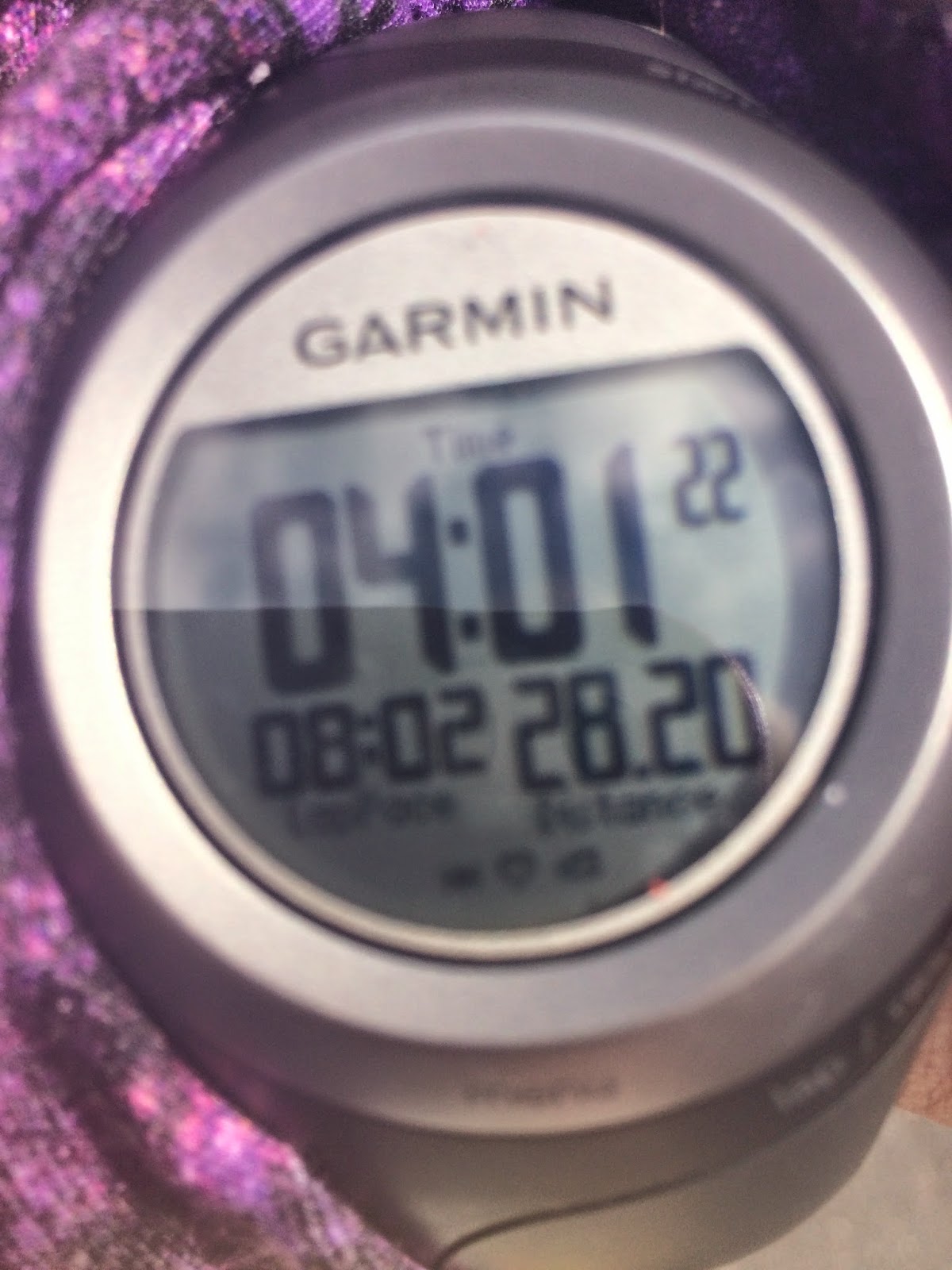 The last few miles were tough.  Not helped by my getting very confused.  At 36k I thought 'I've got 6k to go - that's 2 parkruns!'  (Because when I get to 20 miles I think that I've got 2 parkruns to go).  2 parkruns, at the pace I was going at would take me close to an hour - which meant that any chance of sub 4 was well out of my grasp so there was no point in pushing too hard.  By the time I'd realised my stupidity I had less than a mile to go, and couldn't possibly make up the time.  I did my best, overtaking people as I threw myself over the cobbles (horrible, hot, bumpy cobbles) towards the finish line on the Avenue Foch.  4hrs, 1minute and 17 seconds.  A 10 minute PB - but I was gutted and elated in equal measure!

All in all, I loved this race.  I would sign up for it again in an instant - but I worry that I might not enjoy it as much next year - especially as I would be going along with high expectations.  I think I will definitely investigate other city marathons in foreign countries.  A great way to see a city and to meet loads of other mad runners!

I am confident that I will get that sub 4 hour marathon time soon.  'All' that is required is that I run each mile 3 seconds faster than I did on Sunday.  Given the heat and the crowds, and my propensity to treat any run as a social event, I am sure that if I get some cooler weather, a clearer run and think more about running than having fun I can do it!
Posted by MrsBridgewater at 22:52 No comments: