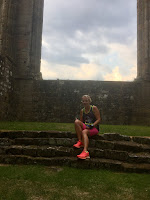 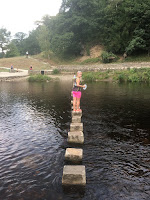 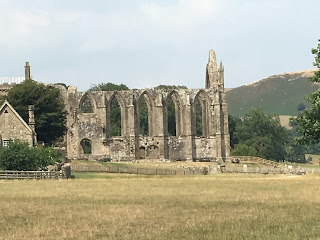 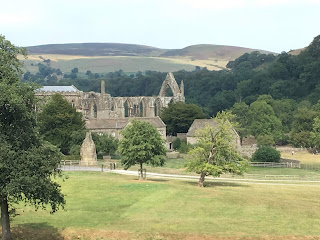 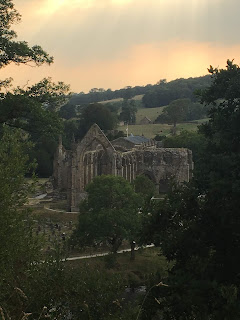 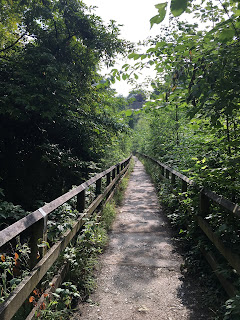 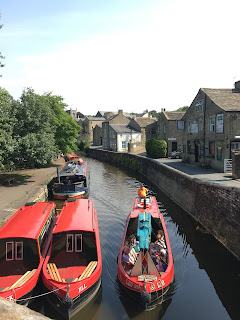 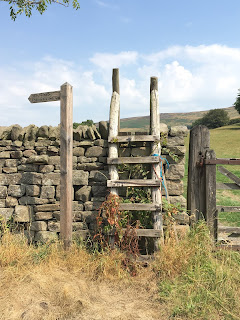 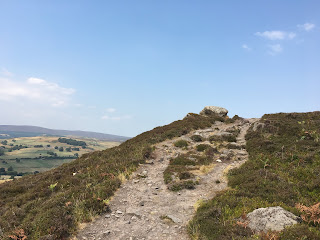 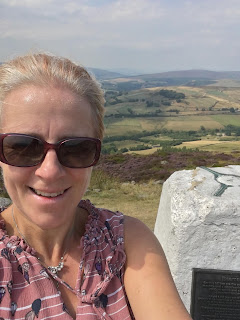 Posted by MrsBridgewater at 23:26 4 comments:


There are good things and bad things about running in flip flops.

Good: if you get a stone in your shoe it falls our really easily.  Bad: you get lots of stones in your shoes.  Good: your feet don't get hot and sweaty on a hot day.  Bad: your feet get REALLY dirty.  Good: you use lots of muscles that you don't normally use.  Bad:you use lots of muscles you don't normally use and they ache a bit the next day. You also get lots of strange looks which leads to starting conversations with people you've never met before.  One gentleman cycled past me, stopped, waited for me to catch up and then said 'You do know you are wearing flip flops don't you?'  Well, knock me down with a feather!  So I am!  How silly of me to forget to but my running shoes on this morning!

So, yes, I ran a race in flip flops.  Why?  Because in a contest with our sitting room door my toe was the looser and I ended up breaking my little toe.  As a result of this I can't get a trainer (or any other shoe) on without causing me enough pain to turn the air around me blue!

I'd entered Phoenix Running's 'Space Race' early last week (before my toe v. door fiasco) with the intention of getting away from the children for a few hours and running a marathon.  I mentioned this to Husbando and a 'non running' friend who said they would come along and 'run a couple of laps.'  We'd decided to take two cars so that they could go home when they were done and so that they wouldn't have to hang around waiting for me.  In the light of my poorly foot we decided to take just one car.

Phoenix's events are lovely, low key and friendly events.  In the 6 hour challenges you can run as many, or as few laps, as you like and you are still a winner.  That meant that I could walk a lap and still claim my rather epic bling!  And that is, honestly, what I intended to do.

I made a fatal mistake though.... I put on running shorts and a running top rather than 'normal' clothes.  Thus when I stood on the start line and everyone started running it seemed unnatural not to at least give the running thing a bit of a go.  It was hard work.  Every step required thought and concentration to ensure that feet and flip flops hit the ground simultaneously, but I was actually running - not fast, but definitely faster than a walk!  The weather was warm, but not excessively so and there was, at times, a pleasant breeze coming off the River Thames.  The tow path was not terribly flip flop friendly and it was very dusty!  I ran the first out and back, chatting to other runners, seeing Husbando and my non runner friend as we passed each other and arrived back at the aid station.  I stopped my Garmin - one lap was more than enough.  I faffed a bit and thought that, as the other two were going to do more than one lap I could probably walk the next lap before they were done, so off I went.  Of course I didn't walk.... I ran.  I completed the two laps (6.6miles) in 1hr 8mins  which wasn't too shabby. 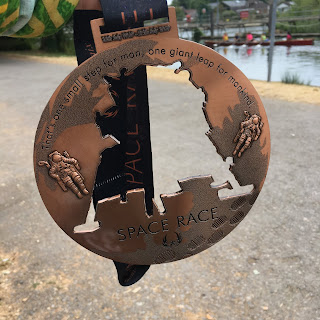 I rang the bell and collected my fabulous bling!  Then came the serious business of supporting the people who were still running.  I sat on a wall and took photos!  Hopefully I got at least one photo of everyone who was still running.  I've just got to find the time to look through them, get rid of the out of focus ones and upload them to Facebook for everyone to have a look at. (Link to the photos is here)
There was some amazing running going on.  One lady completed a half marathon on crutches (see - I am not the only person who doesn't let broken bones stop her running a race she's paid good money to enter!) and there were lots of smiley happy runners on the Thames tow path.

Thanks to all the marshals - that aid station got pretty busy at times and you coped admirably.  Thanks to Rik for putting on yet another great event.  I am sure we'll be back soon! 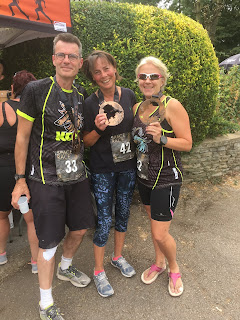 Posted by MrsBridgewater at 21:34 3 comments: