It is the little things that make such a difference. 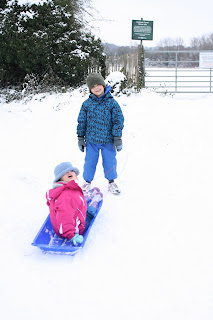 I've had an eventful week. I went to visit my friend in France on Tuesday. We had a lovely couple of days mooching about, and I returned home on Wednesday evening. I should have arrived home at about 9pm, but due to snow my drive from Ashford took a wee bit longer than I anticipated, and I eventually got back home at about 1.40am on Thursday morning. I saw one articulated lorry plough through the crash barrier, then across my side of the road before coming to a stop in the ditch at the edge of the road, and while I was on the hands free, talking to Husbando, I shocked him with a stream of expletives as a BMW overtook me and then went into a spin so that his headlights were shining right at me! I knew that there was no way I could stop on the ice rink that was pretending to be the M25, but luckily I was travelling slowly and managed to drive around him.
Since then, the children have been off school due to snow days, so we spent Thursday and Friday keeping warm and sledging. I used one of the sledges on a trip to the supermarket. I was not keen to take the car out, so set off on foot with the sledge and pulled my shopping home. It was only 2 miles, but felt a lot further battling the snow and the wind!
The gym was closed on Thursday and Friday, and there was no way I was going to risk running on the roads, so I feel very sloth like this week. This morning I discovered that the gym was open! Hurrah! I changed quickly (no other way to change when it is so chilly!) and drove to the gym.
In my haste I had forgotten one little thing. I got on the treadmill and set off. After 10 minutes, including a couple of hills, my left ankle began to protest quite strenuously! I couldn't think what was wrong, I gave it another 5 minutes, but the 'niggle' didn't go away, it just seemed to get worse. I was confused, I hadn't lost my footing, gone over on my ankle or anything like that, and surely running on a treadmill was easier on the joints than running on a road. I got off the treadmill, and hobbled to the Power Plates and continued my workout, then did some time on the eliptical cross trainer. I still couldn't work out what was wrong.
I came home, had a shower, put clean clothes on, and then went to change the orthotic from my 'work out/running' trainers back into my 'everyday wear' trainers. As I fished around for the small (about 3" long, less than 4mm deep) orthotic under the insole of my trainer I realised that it wasn't there. I hadn't moved it over before I went out. Oops! I am amazed at how much difference it makes. I'll have to be more careful in the future!
Posted by MrsBridgewater at 16:21